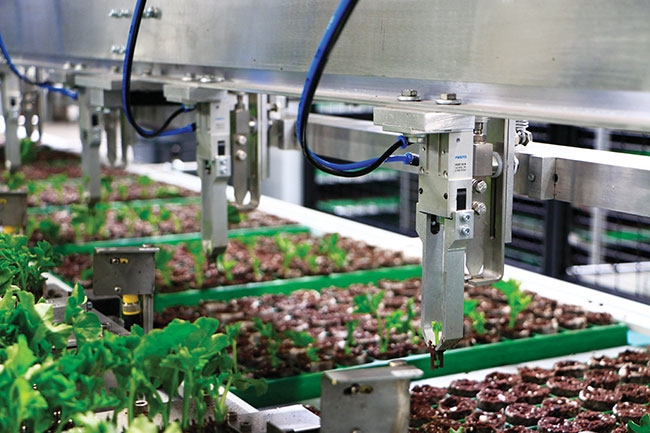 Winner of the 2018 GreenTech Innovation Award, Visser Horti Systems’ AutoStix is an open source transplanting system. Not only does it automate the labour-intensive and often slow process of sticking cuttings, it uses biodegradable strips to keep things environmentally friendly.

Every strip is made up of 34 or 51 cells, each containing a single cutting. The strip is designed to maintain space between cuttings, important during the packing and shipping process. Once planted, the strip begins to biodegrade immediately, taking approximately 12 to 16 weeks to completely disintegrate.

Ron Sant of George Sant & Sons Greenhouses in Ont. was one of the first growers to try it, and the first year wasn’t easy. “We had one of the first models and fine tuning the machine took some time, along with working with [the] farm to get the cutting specs right and [to] figure out which varieties will work.”

Now going into their third year, many improvements have since been made to the technology. Sant estimates that 45 to 50 per cent of their unrooted cuttings will be done through AutoStix, replacing about 10 pairs of hands. “The cost to stick the cuttings is not cheaper than hand sticking if you can get consistent labour,” says Sant, “but that is hard to find and will not get easier.” The machine doesn’t need training, averages at above 90 per cent consistency and requires little fixing at the end of the line.

Visser estimates that payback time is around three to five years for unrooted cuttings. “For an Autostix machine you need two people to stick 10,000 cuttings. Manually you can stick 1,000 to 1,700 cuttings [on] average per hour per person, but you need an extra team around the sticking.” With AutoStix, Visser estimates that growers can save up 80 per cent on labour costs. “With the rooted strips now being offered in the market, you will have [an] even faster payback time [from] the system.”

Developed in cooperation with Ball Hort, Visser supplies the strips to cutting suppliers who have independently developed their own technologies. One example is the Basewell technology from Dümmen Orange.

Introduced at the California Spring Trials earlier this year, Basewell cuttings are produced off-shore, and come with some initial root development – almost like a hybrid between rooted and unrooted cuttings. According to Perry Wismans, global head of floriculture innovation at Dümmen Orange, shipping with the gel can offer additional protection by preventing the risk of desiccation during shipping. “We see [the] future potential of Basewell cuttings to include the application of a gel that will serve as a base to add rooting hormones or other beneficial components to improve the transplant process,” says Wismans.

Approximately half of Dümmen Orange’s annual assortment is available as part of their Basewell line, including Bidens, Coleus, Dahlia,  New Guinea Impatiens, Osteospermum, Pelargonium, and Petunia. Pinched forms offered, include Bacopa, Calibrachoa, Lobularia, Lobelia, Lysimachia, Portulaca, and Verbena. Geraniums from their farm in Ethiopia will be available starting in 2019. Available loose or in strip form, Basewell plants can be transplanted using AutoStix, the ISO robot arm or by hand.

With AutoStix, faster planting isn’t the only advantage to the system. According to Visser, a farm label can be attached to the strip and planted, which helps trace the product in the supply chain. Because it’s an open source system. AutoStix users can easily widen their range of plants by purchasing new varieties and new products available in the strip.