Recent varieties and IDM-resistant impatiens were put to the test. Here are noteworthy highlights from three container and landscape trials in Ontario. 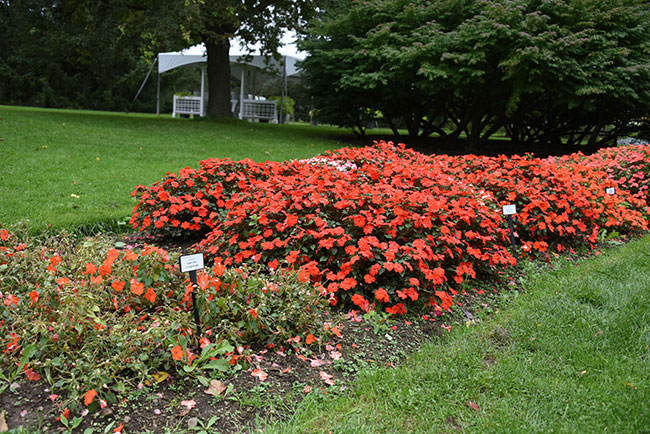 Multiple open houses for the public and the horticultural industry were held at the trial sites in Guelph, Milton and Burlington, Ont. during the first two weeks of August 2019. Grown in either containers or ground beds, the annual plants described here attracted the most attention from visitors to the gardens during those weeks. They also exhibited exceptional performance during the growing season. Cool weather and extremely wet spring conditions ultimately delayed planting of the 2019 trial beds by approximately two weeks from what normally would have been expected. That said, as the growing season progressed, the growing conditions improved and allowed plant growth to catch up, providing a terrific floral display in August. 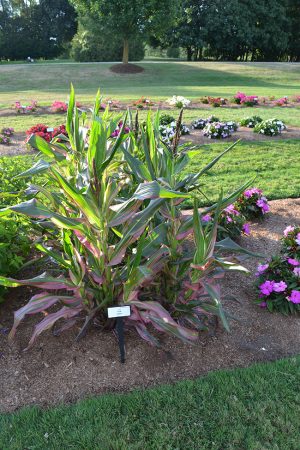 [1] Pink Zebra Ornamental Corn: With its unique texture and tri-colour leaves, this ornamental corn by PanAmerican Seed was one of the most popular landscape annuals last year. Although introduced to the industry over a year ago, this was the first time Pink Zebra appeared in the Guelph trials. As it grew, it produced lots of tillers giving it a compact, bushy appearance with plant height reaching only 105-136 cm and spreading 70-87 cm at the end of the season. Dark brown-purple tassels started to appear in mid-August, and plants in the trial maintained ornamental quality up until early September before starting to senesce. This plant performed well in both containers and in the ground. Pink Zebra was grown successfully in one-gallon pots for use in garden displays for the Canada Blooms garden show in 2019. 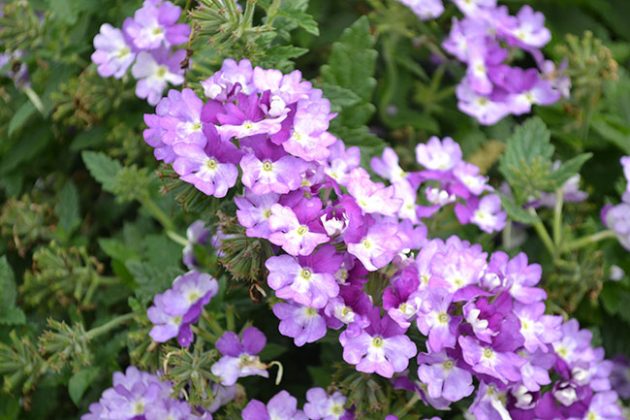 [2] Superbena Sparkling Amethyst Verbena: This trailing verbena from Proven Winners was the most popular “crossover” annual for 2019, demonstrating exceptional ornamental performance in both containers and landscape. This purple-amethyst and white-bicoloured selection had great heat tolerance with summer-long bloom and appeared resistant to powdery mildew. By the end of the summer, the trial’s plants had spread to approximately 1 meter in diameter and mounded to a height of 22 cm. For mixed containers, this selection could function as a great “spiller” in combination with equally vigorous plant selections. 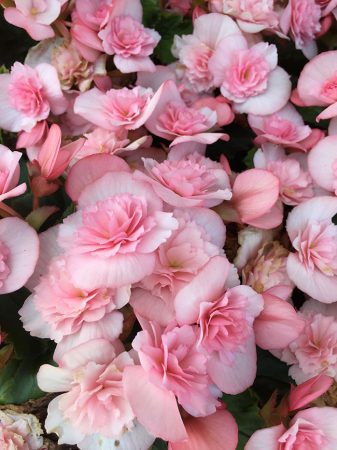 [3] Move2 Joy Pink Begonia: The favourite container-grown begonia for 2019 was Move2 Joy Pink from Dümmen Orange. Both the pink and white cultivars in this series were trialled under part-sun conditions and performed equally well in both landscape and containers, although the pink colour attracted the most attention. Both cultivars produced a crown of blooms that, at its peak, completely covered the large leaves for great floral impact. Move2 Joy Pink reached garden heights of 30 cm with a plant spread of 40 cm. Individual flowers were seen to reach diameters of 6.5 cm. 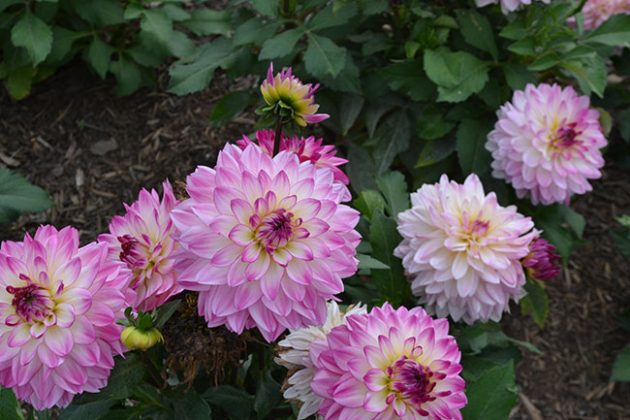 [4] Sincerity Dahlia: With its large bicolour lavender and white blooms, Sincerity from Syngenta was the most popular dahlia in the trial. It had moderate vigour with plant height reaching 52 cm in the landscape and spreading to 70 cm. Bloom diameter can reach 16 cm. It was named Plant of the Year for Canada Blooms 2020 – a great choice. 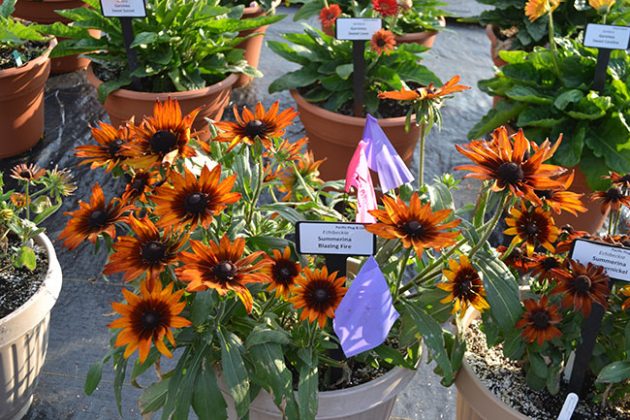 [5] Echibeckia Summerina: Pacific Plug and Liner’s Echibeckia Summerina is the name given to a series arising from the intergeneric cross between Echinacea and Rudbeckia. Although its genetic heritage would potentially make this a perennial in southern Ontario, the hardiness from the breeder only claims adaptation to USDA Zones 6 or 7. There are eight colours available in this series; each has a different flower colour pattern, petal shape or plant habit. The colours range from dark brown-maroon to orange-yellow. The habit is generally compact and well suits container applications. Visitors to the 2019 trials picked container-grown Summerina Blazing Fire as one of their favourites. 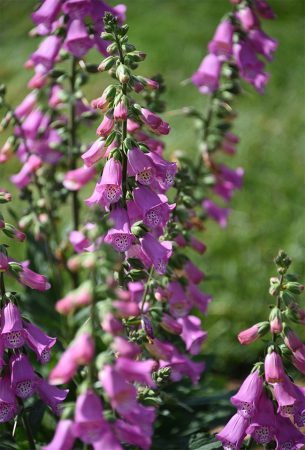 [6] Foxglove Pink Panther: The foxglove Pink Panther from American Takii was very popular to visitors in both container- and landscape-grown scenarios. Pink Panther had a long bloom period with trial specimens that were seeded in early April, flowering 13 weeks later in July and continuously until the killing frost in late October. Its growth habit was compact, with multiple flowering stems. Flowering spikes ranged in height from 33 to 81 cm, and individual plants spread to 50 to 57 cm by the end of the growing season. Individual flowers were small, measuring 2.3 cm in diameter by 3.5 cm in length – smaller than those found in the Camelot series of foxglove, for example. American Takii has not been promoting this plant as a perennial but it certainly is cold-tolerant. Winter hardiness evaluations for this selection have been taking place in the Guelph trials during winter 2019-20. 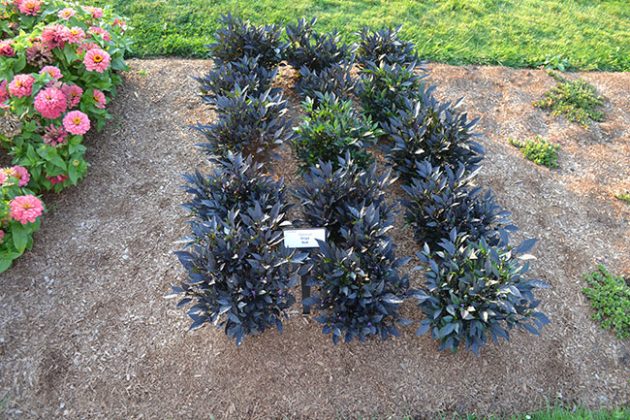 [7] Capsicum Onyx Red: Another popular landscape selection from American Takii was the ornamental pepper Onyx Red. It was selected as a national winner in the 2018 All-America Selections judging season. The dark purple foliage and small round purple fruit that ripens to a brilliant cherry red is reminiscent of Black Pearl but at half the height. Its growth habit is very suitable for both container and landscape applications. End-of-season landscape height in Guelph was 27-36 cm with a spread of 36-41 cm. 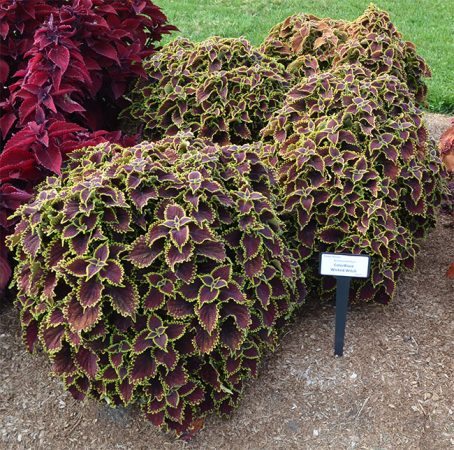 [8] ColorBlaze Wicked Witch Coleus: The most popular coleus from both the container and landscape portions of the trial was ColorBlaze Wicked Witch from Proven Winners. The leaf has a dark purple centre with a green margin. The selection went through the entire growing season without blooming. End-of-season landscape height in Guelph was 53-56 cm with a spread of 57-64 cm.

Putting disease-resistant impatiens to the test
This article wouldn’t be complete without mentioning the results of last season’s trial on impatiens, testing their performance against impatiens downy mildew (IDM). Two new series of IDM-resistant Impatiens walleriana are now available: Imara XDR series from Syngenta and Beacon from Ball. Cultivars of these two series were grown alongside two cultivars of SuperElfin impatiens, which was an older series that was once widely grown before IDM came along. Because SuperElfin impatiens are highly susceptible to IDM, they were planted beside Beacon and Imara XDR as a control. The impatiens were planted in containers (Vineland and Guelph trial sites) and landscape (Guelph, Milton and RBG trial sites). Garden performance was excellent for all three series until evening temperatures started to drop in September. At this time, we started to see a decline in SuperElfin White, and a few weeks later, in SuperElfin Orange as IDM infected landscape plantings of these varieties. While SuperElfin selections succumbed to the disease, both Beacon and Imara XDR impatiens continued without IDM symptoms. It is interesting to note that all three series were free of IDM symptoms when grown in containers in the 2019 trials.

Rodger Tschanz is the trial garden manager at the University of Guelph. He can be reached at rtschanz@uoguelph.ca.