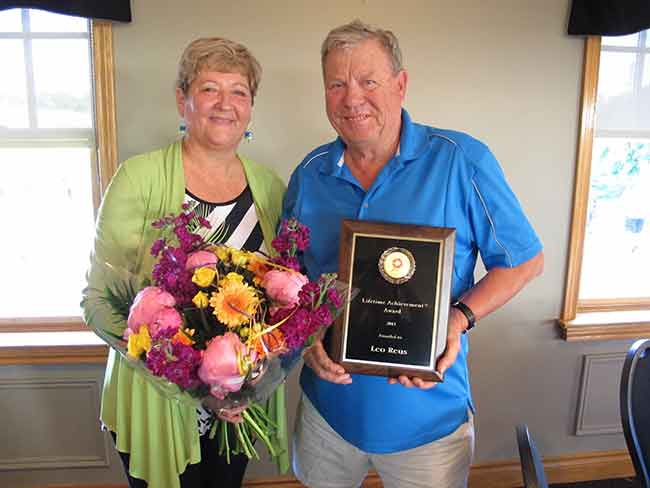 October 2016 – This year’s Lifetime Achievement Award winner of Flowers Canada Growers was a pioneer in North America in growing one of the most popular houseplants.

Leo Reus, who along with his wife Emmy launched and owned Balfour Greenhouses in Fenwick, Ontario, for many years, astutely saw the potential of kalanchoes early on in their business. The farm has been a North American industry leader in the crop since then.

Leo and Emmy sold Balfour Greenhouses in December of 2015 and are now enjoying retirement.

The Lifetime Achievement Award is presented to a grower, distributor or retailer who:

Leo and Emmy farmed five hectares of tulip and daffodil bulbs in the Netherlands before deciding to emigrate to Canada with their two young daughters.

In August 1976 they arrived here and Leo began his first job at Waterloo Flowers near Kitchener.

Leo and Emmy soon decided to get into business for themselves, and purchased farmland in Fenwick in July of 1977.

“At the time when we emigrated there were so many rules and regulations regarding building greenhouses in the Netherlands,” said Leo. “This was not the case in Canada. For example, when we applied for a building permit for our first greenhouse (in 1977), all that was needed was a simple drawing. We had our permit within 30 minutes.”

They began with a 25,000 square-foot plastic greenhouse, and Balfour Greenhouses was up and running – and soon eager to expand.

“As you can see by the growth Balfour Greenhouses experienced over the years,” said award presenter Jamie Albers of Flowers Canada Growers, “Leo was a quick learner and was able to build up his customer base as well as the crops he grew. Balfour Greenhouses was the first grower of kalanchoes, a product for which they are now well known for.”

As sales grew, Leo kept on building more greenhouses to meet the demand. “He humbly stated to me that they have had very good success,” said Aalbers, “and that very good success is more than 50 per cent due to his partner in life, Emmy.”

Leo not only built a successful business, but he helped build the industry by serving on a variety of boards and committees over the years. He devoted many years of service to the boards of the Ontario Flower Growers Co-op, Flowers Canada and AgEnergy, along with 15 years service as the Flowers Canada representative on the Farm Safety Association. He was also an active member of the Canadian Ornamental Plant Foundation.

Volunteering comes easily to him.

“I am always interested in meeting people who have other ideas about how to improve situations, solve problems and make our industry a recognized and an important one in the agriculture sector.

Balfour Greenhouses grew to 380,000 square feet and had between 30 and 40 employees at the time Leo and Emmy sold the business.

“And on top of running a farm, raising a family, and volunteering his time to the industry,” said Aalbers, “Leo also served his community as a volunteer firefighter for 30 years. For 15 of those years he was district chief.”

Leo said the keys to a successful greenhouse business include:

Leo said it’s important to set the groundwork for success by developing business plans for one, three and five years in the future.

“Have respect for all your employees, from the head grower to the people who sweep and clean over the weekends.

“And last but not least, make time for your family and be thankful to the Lord for all your blessings.”

OTHER AWARD WINNERS
Earlier this year, the FCG awards program also paid tribute to a pair of retired extension specialists.

Murphy, who served for 26 years as the greenhouse floriculture IPM specialist, received the 2014 award. He was out of the province last year when the award was announced.

Brown, who had a 35-year career as the greenhouse floriculture specialist, received the 2015 award.

The two had offices at the Vineland Research and Innovation Centre next door to one another, and collaborated on numerous research projects and workshop presentations.

Both were quite humbled with the awards, noting they learned as much from growers as the growers did from them.

WAYNE BROWN
Wayne Brown was quite persistent in his problem-solving. “Wayne became fully immersed in our industry, bringing his keen sleuthing skills to any production problems a grower could throw at him,” said Blom, the award presenter.

Brown completed his master’s degree at the University of Guelph and headed west to teach at Olds College in Alberta. A year later, he applied for and was selected to be OMAFRA’s greenhouse floriculture and mushroom specialist.

He took over from Blom, who had transferred to the newly created position of floriculture scientist at the Horticultural Research Institute of Ontario.

Brown started his new duties late in the summer of 1979. In November of that year, the Canadian Greenhouse Conference debuted at the University of Guelph.

“This did not give Wayne much time to devote to planning the first conference,” Blom noted, “but he has been very actively involved in the CGC board for every conference since. Even in his retirement, Wayne still serves on the executive and trade fair committees.”

Brown has always found growers to be hungry for new information and keen to look at new technologies. However, some of the new systems were developed without the plant in mind. He was able to work with growers to adapt the way they grew plants so that the technologies worked for them.

Brown is well known for his annual poinsettia and vegetative annuals variety trials. The poinsettia trials began in 1999 when poinsettias were the number one potted flowering crop in Ontario and were also grown by the largest number of growers.

It was more than a job or a career to him, and what stands out most are the many friendships that developed over the years. “There is a real sense of community,” Brown said. “When I was working with growers to solve production issues, their issues became my issues.”

In addition to his extension work, Brown served on many committees and was constantly involved in research projects. Though he retired early in 2015, he still coordinated that year’s poinsettia trials.

GRAEME MURPHY
Graeme Murphy was a key OMAFRA resource over the years until his retirement in late 2014, said award presenter Lou Schenck, of Schenck Farms and Greenhouses.

“His expertise provided support to growers when new and invasive pests arrived. He still remembers, as many of us do, when western flower thrips were not a big concern here in Ontario.”

Murphy developed and delivered one-day and two-day IPM courses for growers and Canadian Food Inspection Agency (CFIA) staff. As well, he was involved with FCO’s night school program for growers for many years.

Murphy has written extensively in grower trade publications throughout North America, including Greenhouse Canada. He has also spoken at numerous conferences and workshops, both locally and internationally.

When Murphy began at OMAFRA in 1988, it was all pesticides, all the time. However, today almost all growers go to biocontrols as their first line of defence. “His expert entomological experience and knowledge helped many growers in Ontario as they managed that transition.”

Schenck noted that Niagara is widely regarded as a world leader in biological controls. This is largely due to a lack of registered chemicals in Canada, but also to the research at the Vineland Research and Innovation Centre, along with the dedication of industry suppliers, and to “Graeme’s leadership.”