The long-time cut flower grower specializes in stem tinting, and has marketed a product line called “Brilliance” to the floral trade. The process involves placing a dry-cut into a colouring solution for absorption of an array of colours. 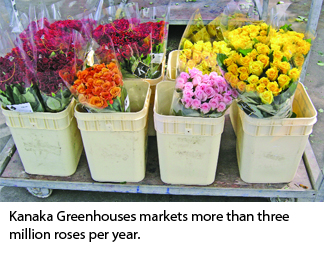 KANAKA GREENHOUSES
Next on the itinerary was a visit to Kanaka Greenhouses. The company, which has operated for some 37 years, grew English cucumbers for the first 20 years or so, before it began moving over into cut flowers.

Until about two years ago, it was all cut roses. However, the company has since introduced a new product line of patio plant standards, called the “Patio Garden” collection.

The number of rose growers in B.C., said Martin, has dropped from about a dozen or so in the 1990s to about four at present. “The market has become a lot tighter with competition from South America and other imports.” However, local growers have a major advantage – freshness. South America “can’t compete with us” on that, he noted.

Kanaka uses artificial lighting to allow them to grow year-round, as well as influence production during peak sales seasons such as Valentine’s.

They have both standard and spray rose varieties, and produce in excess of three million stems per year.

They harvest every day, with the exception of Christmas and New Year’s Day.

Production is highly organized, with employees given their own sections in which to work. This allows them to specialize in only a few varieties, instead of having to work with all 28 of them. In total, the company has 20 employees.

Rose plants are replaced every four to five years. The first year, as the plants are being established, they produce at about 60 per cent of full production. They then achieve full production for the next three to four years. “By the fifth year, the production and quality will begin to decrease.”

They use 12-litre pots with a mixture of coco fibre and perlite, topped with sawdust. Drip irrigation is used.

“There haven’t been a lot of changes in growing techniques over the past 10 years,” explained Martin.

Crop maintenance includes regular pruning of blind shoots, those no longer producing flowers. This is particularly a problem during winter months when the lower light levels mean there is not enough energy to produce buds with every stem. Some varieties are more susceptible than others. The goal is to have a balance of growing points and leaf mass on the sides.

CO2 lines help boost levels within the crop. The CO2 is captured off the boiler system.

Kanaka also specializes in stem tinting and has marketed a product line called “Brilliance” to the floral trade. The process involves placing a dry-cut into a colouring solution for absorption of an array of colours.

The most popular consumer choice is “Electric Blue.”

Pest management is a major challenge. There aren’t a lot of chemical controls available, so growers rely on biological controls. Spider mites are the easiest to control biologically, compared to whiteflies or aphids.

“It’s always a balancing act of spot spraying difficult areas while not affecting the predators working so well in other areas,” explained Martin.

Growers really have to do their homework in selecting new rose varieties. Variety considerations include not only colour and fragrance attributes, but also production levels. “It’s the number of stems per square metre that can make or break you.”

Sometimes a variety has a beautiful petal or is especially fragrant, “but they may open too quickly or may not have a good vase life. The ideal rose variety for growers would produce high quantities, and be thornless, fragrant and long lasting.”