Pieter and Anita deBruin of Devan Greenhouses have been among the first to embrace new technologies. 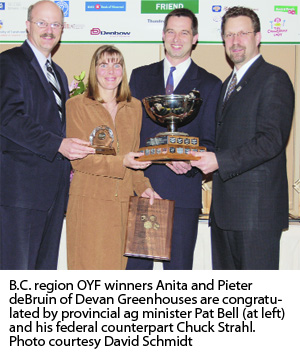 Pieter and Anita deBruin of Devan Greenhouses in Abbotsford were named this year’s B.C. Region Outstanding Young Farmers at the fourth annual Agricultural Gala in Abbotsford.

After working in a Richmond greenhouse since childhood, Pieter decided to start his own greenhouse shortly after getting married. In 1993, the deBruins sold their Richmond home and used the equity to buy an old Richmond plastic-roofed greenhouse, which they dismantled and reconstructed in Chilliwack. After building their business for six years, they relocated to undeveloped land near the Abbotsford-Langley border where they built a glass greenhouse with an ebb-and-flood system, which allowed them to recycle their water. This was the second area greenhouse to use Russian ECA technology to produce environmentally friendly, biologically active solutions electrochemically.

Because they are now located on the busy Fraser Highway, the deBruins have added a growing retail section. With the retail centre, Devan now employs 30 to 40 people.

During the spring and summer, Devan grows a wide variety of annuals marketed through their retail centre or the United Flower Growers auction.

Also reaching the 2006 OYF finals were Grant and Justine Keefer of Yellow Point Cranberries of Ladysmith, Kevin and Annemarie Klippenstein of Klippers Organic Acres in Cawston, and Bob and Marianne Maljaars of Inline Nurseries of Chilliwack.

A judging panel of retired senior banker Bruna Giacomazzi, Abbotsford appraiser Glen Lathrop, and dairyman and 1984 BC OYF winner Louis Schurmann selected the winner. “It was a very difficult job to nail it down to one winning couple,” Giacomazzi said, noting all four finalists “started with very little and built their enterprise to what it is today.”