Michigan symposium clearly illuminates what we know and don’t know about lighting for plants in controlled environment. 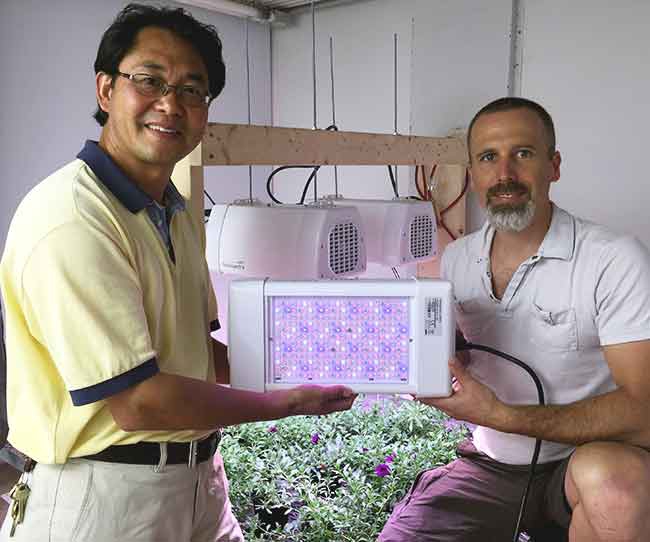 October 2016 – Lighting is one of the most important inputs in controlled environment (ex. greenhouse and plant factories) plant production that we have the ability to manage in order to achieve our production goals. There is an astounding variability in how plants utilize light for photosynthesis as well as perceive and respond to their lighting environment.

However, the strategies and effects of modifying the lighting environment (i.e. intensity and spectral quality) in order to achieve specific production outcomes are often poorly understood or even misunderstood.

In this article, we will summarize some of the interesting points, including some challenges to old ideas, that were discussed at the VIII International Symposium on Light in Horticulture, May 22-26, 2016, Michigan, U.S.A., that are particularly relevant to crop production.

At this symposium, there were 245 participants from all over the world with most of the world’s horticulture lighting experts and suppliers gathered under one roof. It’s almost unbelievable how much more we have learned from horticultural lighting research in the past decade, and how much more we still do not know. We were also struck by how many concepts about crop/light interactions found in textbooks are now being challenged. Many of these advancements have arisen directly from recent developments in LED technologies, which have opened the doors to practically limitless research and application opportunities in spectral science.

To make this article easy to read, we will do it in point form.

For some basic horticultural lighting background you may like to read our previous article in this magazine’s March 2016 issue entitled “Are LEDs the right choice for my operation?.” Among other topics, this article highlights the differences between HPS and newer LED technologies.

In conclusion, there has recently been a rapid increase in plant lighting research thanks to the invention of LED lighting technologies; however, there are many things we still do not know. What is clear is that extreme caution should be exercised when extrapolating lighting research results from one cropping scenario to another. We strongly advise growers to search the (scientific) literature to find out the light requirements of their own crops. It is also highly advisable to take what can be learned in the literature and apply it to trials in their specific cropping setting. It is best to understand the influence of a specific lighting regimen (i.e., intensity and spectral distribution) before scaling up to a full production scenario. This is especially true for growing plants under 100 per cent artificial lighting.

Dr. Youbin Zheng (yzheng@uoguelph.ca) is an associate professor and Environmental Horticulture Chair at the University of Guelph and is also a researcher at the Vineland Research and Innovation Centre; Dave Llewellyn (dllewell@uoguelph.ca) is a research associate at Dr. Zheng’s Guelph lab who has extensive experience working with lighting technologies in research and production environments.