Perhaps not the first vegetable that comes to mind, greenhouse eggplants garner a premium over their field-grown counterparts. 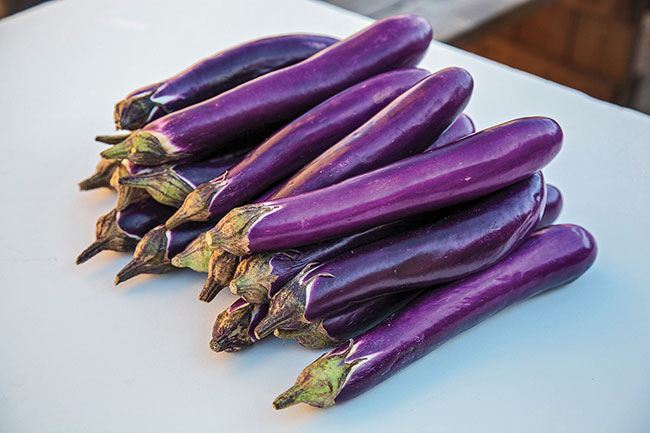 While popular as an emoticon, the humble aubergine may not be the first Ontario-grown vegetable that comes to mind. And yet, approximately 16 per cent of eggplants sold in the province are grown locally. While competition from foreign growers with lower price points presents challenges, the Greenbelt Foundation has released its Plant the Seeds: Opportunities to Grow Southern Ontario’s Fruit and Vegetable Sector report that outlines how Greenbelt-area growers could increase production, providing over 18 per cent of all eggplants sold in Ontario.

The eggplant is an example of a “world food” that, when grown in southern Ontario, competes with imports from the US, Mexico, Central America, and some Caribbean countries. Given that it is a warm-climate crop, there is particular opportunity for production expansion among Ontario greenhouse growers who can achieve a longer, uninterrupted growing season than field growers. Whereas most field-grown eggplant can only be transplanted to the field after May 24th, greenhouse growers or those who use high tunnels to prevent frost damage, can bring plants to maturity more quickly and capture higher, early-market prices.

The highest price for Ontario-grown eggplants is achieved through direct sales to food retailers, with the Ontario Food Terminal (OFT) offering slightly lower returns. In 2019, prices for Ontario field-grown eggplant ranged between $0.64/lb and $0.95/lb in the September to early November period. In 2018, prices at the OFT ranged between $0.90/lb and $1.50/lb for sales starting in July. Greenhouse-grown eggplant, on the other hand, garners significantly higher prices that range between $2.50/lb to $3.50/lb.

Ontario growers are competing with US operations that have a longer growing season and lower labour costs, resulting in lower per unit costs. The USDA reports farmgate values of eggplant at approximately $0.55/lb in Canadian dollars. These figures suggest that Ontario growers should strive for a more competitive cost structure. With that said, greenhouse-grown eggplant has a well-established premium over field-grown eggplant. Consequently, greenhouse-grown eggplant may be sold competitively at a higher price-point.

Major food retailers prefer to work with one or two suppliers to achieve necessary volume requirements throughout the year. With field-grown eggplant available for up to three months and greenhouse-grown product available longer term, growers and industry associations can work together to assemble a critical mass that meets retailer’s needs.

Additionally, to supply major retailers, growers may be required to be part of a North American supply chain that fulfills accounts in Canada and the US from a number of sources. Alternatively, Ontario field growers could align with greenhouse growers to be part of a 12-month local supply offering. Whichever the case, a critical mass of product is required to supply individual retail accounts. Smaller growers must aggregate with others to reach this necessary critical mass.

With 450,000 acres of Canada’s most productive farmland and in close proximity to the province’s biggest market, the GTA, any significant expansion in eggplants would likely happen within the Greenbelt. As a result, the Greenbelt Foundation is supporting agri-food producers in collaboration and knowledge-sharing to achieve expansion opportunities.

Michael Young is the communications advisor for the Greenbelt Foundation.

1 Comment » for Expand into eggplants: A unique greenhouse opportunity