Eggplant consumption – particularly exotic varieties not previously grown in Canada – is forecasted to increase 130 per cent by 2030 to 55 million kilograms. 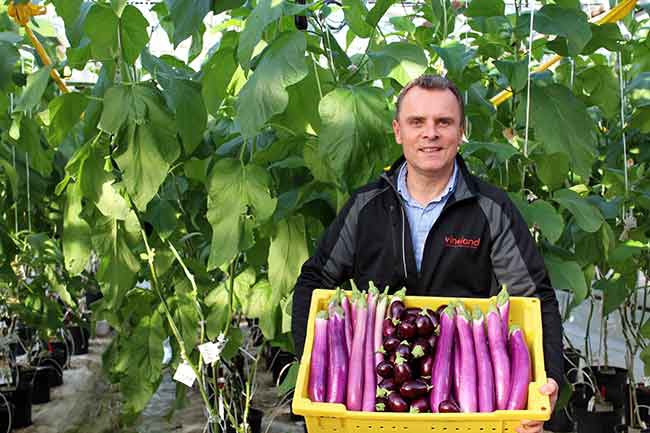 March 2016 — With the highest per capita immigration rate in the world, Canada’s produce consumption is continually evolving.

Based on Statistics Canada reported patterns of growth over the last five years, eggplant consumption – particularly exotic varieties not previously grown in Canada – is forecasted to increase 130 per cent by 2030 to 55 million kilograms.

This is a market currently largely supplied by imports.

A team at Vineland Research and Innovation Centre (Vineland) is investigating varieties with commercial potential for production in Canada to meet this growing consumer demand and replace imported produce with local.

Dr. Viliam Zvalo (below), Vineland’s research scientist in vegetable production systems, and his team initiated simultaneous research trials on both Chinese long and Indian round eggplant during the 2015 growing season.

Grafting onto tolerant tomato rootstock is an effective technique to overcome soilborne disease for field eggplant and to improve vigour and yield for greenhouse eggplant.

Using a Maxifort rootstock, the Vineland team achieved an 84 per cent increase in yield for the Long Purple hybrid in a greenhouse setting. On the other hand, when grafted onto Maxifort rootstock for field production, flowering and fruit set were delayed, which is undesirable.

Farm trials on different rootstocks will be undertaken this year.

“We have also used row covers in field production to obtain an earlier harvest,” says Zvalo. “Modifications of the growing environment through the use of row covers and black plastic mulch are necessary to grow eggplant in Canada.”

As with any new crop, it takes some knowledge and experience to be successful in eggplant production.

Since eggplant is in the Solanaceae (Nightshade) family, insect and disease pressure can be expected to be similar or perhaps slightly higher than other crops in this group (such as tomato and pepper). The major pests are thrips, mites, aphids and whiteflies. Powdery mildew may need to be monitored and treated.

In a high-wire greenhouse, Chinese long eggplant will need to be lowered as the growth rate is high, especially when grafted on Maxifort rootstock.

Following two variety screening trials in a low-wire greenhouse in 2015, the project moved into a newly constructed high-wire greenhouse. Four hybrid varieties of Chinese long and Indian round eggplant were selected and grafted on six different rootstock with the objective to identify the best combination of rootstock and scion (variety) for high yield and quality. This trial is scheduled for 2016 and 2017.

This research project is funded by Agriculture and Agri-Food Canada’s Agricultural Innovation Program, Growing Forward 2 (GF2), a federal-provincial-territorial initiative and with support from the Ontario Fruit and Vegetable Growers’ Association and participating growers across Canada.

Dr. Viliam Zvalo joined Vineland Research and Innovation Centre in 2014. In his role at Vineland, he investigates field and greenhouse production of world crops and other new crop opportunities for Canadian growers. He brings a wealth of experience after spending 13 years at Perennia Food and Agriculture Inc. in Nova Scotia where he provided support to vegetable producers and managed numerous research projects in new vegetable crop development, cultivar testing, pest management and evaluation of different production systems and methods. He holds a PhD in plant physiology/soil ecology from the Slovak University of Agriculture in Nitra, Slovakia, and an Executive MBA from Saint Mary’s University in Halifax.