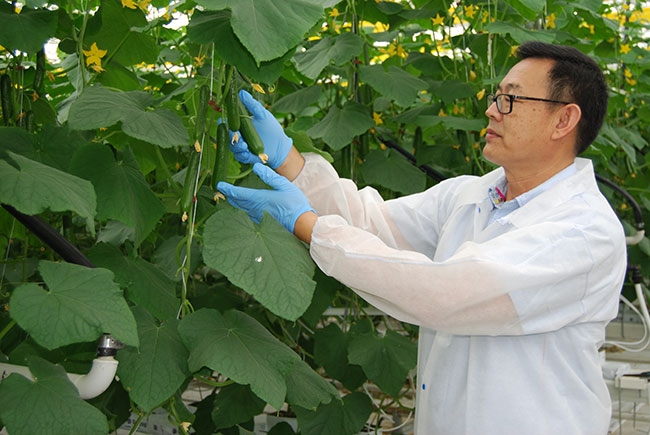 With dark, short days in winter months, growing in Canada isn’t easy – even in controlled environments like greenhouses. To keep providing markets with high-quality produce, supplemental lighting is top of mind for many greenhouse vegetable producers.

That’s why projects like Dr. Xiuming Hao’s are so important. Based out of Agriculture and Agri-Food Canada’s Harrow location, the researcher focuses on year-round vegetable production using supplemental lighting.

But it’s not as simple as hooking up lights in a greenhouse.

“Light is just one form of energy,” he says. “Once you put in light, the whole greenhouse’s energy balance is changed. The microclimate is changed.”

HPS lights generate so much heat that half of a greenhouse’s heating requirements can be met by the light fixture itself. This reduces input from the heating system, decreasing natural gas use. But that’s not necessarily a good thing.

The lights run on electricity, and heating the greenhouse with electricity can get expensive, Hao says. Because the heat is in the form of long wavelength radiation (called ‘thermal radiation’), the crop canopy heats up substantially, which leads to higher transpiration. The result? More irrigation.

In contrast, LEDs produce less thermal radiation and more heat though convection. Rather than sending direct waves of heat to the plant, they warm up the air around the light fixtures. This results in lower leaf temperature and comparatively lower transpiration.

“They are more efficient in electricity use,” Hao says of LEDs, “but because they produce less waste heat, you need to heat [the greenhouse] a little bit more compared to high pressure sodium.”

It’s about balance
“Energy lost from the greenhouse and energy going into the greenhouse is the same,” Hao says. “During the winter, we lose heat because the outside is cooler. So then we need to use the boiler to produce hot water to heat the greenhouse.”

There are other forms of energy as well, including light. Light fixtures like HPS also produce waste heat, affecting the rate of transpiration – a form of energy conversion.

“With water evaporation, it absorbs a lot of heat,” says Hao. The amount of heat needed to transform one gram of liquid water to water vapour is enough to cool one cubic metre of air by two degrees Celsius in the greenhouse. “So the plant is somehow the best air conditioner,” Hao says. “All the energy in the greenhouse, including solar energy, half of it goes through the transpiration process.”

That’s great for sunny days in the summer, but when HPS fixtures increase transpiration, you could use some way to recover that heat for later use in the winter.

We could use a dehumidification system to recover and store the heat, all while reducing humidity and improving energy management, Hao explains. “The heat we store, we can use later when the light is off.”

Improving the microclimate
There are two different types of microclimate in the greenhouse. The first is localized to the greenhouse environment itself, which includes indoor air temperature, humidity, light intensity, air movement and CO2 concentration. The second is known as the ‘plant microclimate’. That includes crop temperature, condensation on leaves, leaf surface humidity and so on. Neither stay consistent across the greenhouse or along the crop canopy.

“The microclimate is not uniform,” says Hao, “especially if you’re working with greenhouse fruit vegetables like tomato, cucumber and sweet pepper.” They are really tall crops, so temperature, humidity and lighting will differ along the height of the crop – at the head, in the middle and at the bottom.

During the day, the sun distributes the most light to the top of the canopy, raising the temperature. At night, the bottom of the canopy is warmer from the heating pipes.

This has profound implications for humidity in the plant’s microclimate. With the sun or HPS lighting at the top and heating pipes at the bottom, the middle of the canopy ends up with the lowest temperature and the highest humidity – which could lead to condensation and disease.

Because of the lower impact on leaf temperature, LEDs can be safely used for intracanopy lighting, placing them in the middle of the canopy to help even out temperature and humidity. HPS would be too hot.

If we can improve the microclimate and prevent condensation on the leaf’s surface, we can reduce disease, lower pesticide applications and improve quality, says Hao. Plus, the middle and bottom leaves will have access to more light, improving the photosynthetic capacity of the crop as a whole.

He’s also worked on something in the past called a ‘grow pipe’. “It’s just a small heating pipe. You put it inside the canopy,” he says, to warm it up and reduce humidity.

Growing more fruit
It’s not just the middle of the canopy that’s affected. With HPS, a higher temperature at the head of the crop impacts plant development.

“Especially for cucumber, it’s really interesting how fast the plant development is affected by the head temperature, because that’s the area that produces new leaves and the cells divide into more cells,” Hao explains. The crop becomes tall, skinny and produces a lot of small leaves. They also become more generative, which is good for fruit production.

With LEDs, the growing point has a lower temperature, which causes the plant cells to divide more slowly. Because each cell has more time to grow, there are larger but fewer leaves on shorter plants. While this would be advantageous for growing leafy greens, it’s less ideal for fruit production.

Experimenting with beefsteak tomatoes, Hao’s found that some varieties are more suitable for HPS than LED, and vice versa.

For more vegetative cultivars with larger leaves, HPS reduces leaf size but leaves grow well, he says. “If you put LED, you have even more leaf growth, but the fruit don’t do that well.”

Hao is working with students at the University of Guelph on light recipes that could promote the export of photoassimilate – the sugars produced during photosynthesis – to the fruit.  “You don’t want to keep them in the leaf, you want to send them to the fruit.”

Once tomatoes and cucumbers reach their full canopy, Hao starts to de-leaf and lower them, so the height of the fruit remains about the same and the LED bar’s positioning remains unchanged. For peppers though, the interlighting’s height is adjusted as the plant grows.

The plant needs to be at about one metre in height, so at least you have a half metre of canopy above the interlighting, Hao says. Prior to that, there’s no canopy above it and you would be wasting light, he chuckles. “But the top light you can start after planting.”

“The wall of the pepper grown under supplemental lighting is much thicker and much crisper than the one without lighting,” he says. “You have more [of the] edible part.” The tomatoes taste better because of the higher sugar content from the light. For cucumbers, he says “the skin colour is much darker, you have a higher chlorophyll content”, especially for those with direct interlighting. The cucumber fruit is firmer, tastes better and you have potentially longer shelf life, he adds.

Integration is key
Hao has also found that plants grown under HPS tend to develop faster and senesce faster, so they need more calcium and nitrogen to maintain vigour throughout the year. With LEDs, the plants grow quite vigorously already, and don’t require the extra nitrogen supplement.

“We need to look at all the aspects,” Hao says. When growers add lighting or switch to a different kind of light, it affects the microclimate and crop growth, as well as requirements for heating, watering and nutrition.

There are also a lot of positives for the environment.

“Reducing the heating energy use, that means I reduce natural gas usage, that means less combustion, less emission of CO2 or other gases to the atmosphere,” Hao says. “For fertigation, I use water and nutrients more efficiently,” and less waste fertilizer goes to the environment.

Acknowledgements: This research is supported by Ontario Greenhouse Vegetable Growers, the Agri-Innovation program of the Growing Forward 1 and Growing Forward 2 programs, and internal funding from the peer review program at Agriculture and Agri-Food Canada.