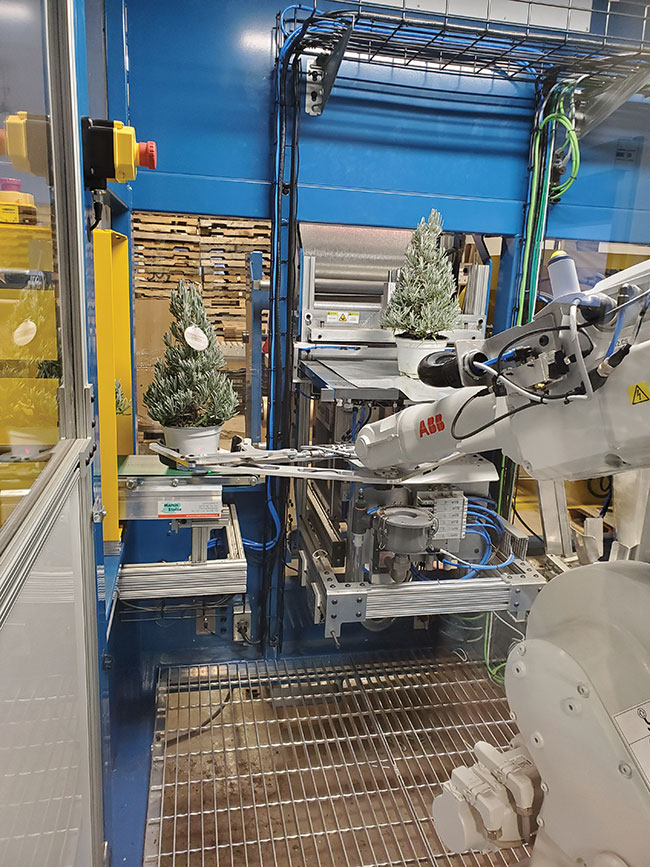 Inside the cell, a robotic arm grasps one pot while mylar is fed and cut to size beneath another.

Operating from the heart of Ontario’s greenhouse ornamental sector, a robotics developer is building automated solutions to handle the packaging process. But rather than building one machine for each crop, they’re building a separate module for each task, allowing greenhouse operators to pick and choose the functions they need.

“Every grower has their own unique way of doing things and different issues they’re dealing with,” says Bill Vandenoever, who co-founded Bold Robotic Solutions with colleague Willem Bijlsma just over three years ago. Combining their respective skills in mechanical development and automation gained from the steel and lumber industries, the pair set out to alleviate a rising need for labour solutions in the greenhouse sector. It wasn’t long before they connected with Rodney Bierhuizen, owner and operator of Sunrise Greenhouses in Vineland, Ont., who recognized the need for flexible automation in the sector and offered them a working space in his warehouse.

“One of the biggest challenges is we’re typically much more diversified in North America versus Europe,” says Bierhuizen. European greenhouses tend to be monocrop, allowing for more specialized high-throughput mechanization. In comparison, North American ornamental producers are driven by the markets to supply a wide array of items, with fluctuating volumes depending on the season. “This creates a challenge with payback if equipment is only used for limited periods of the year, usually associated with holidays,” he explains. Adding to this challenge is the volumes that the equipment must process during this period to make a profit. 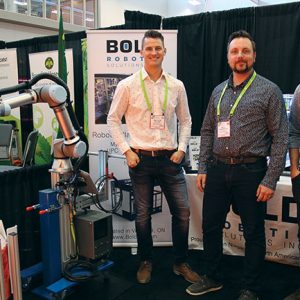 [Left to right] Willem Bijlsma, Bill Vandenoever and Josh Schuurman of Bold Robotics at the 2019 CGC. 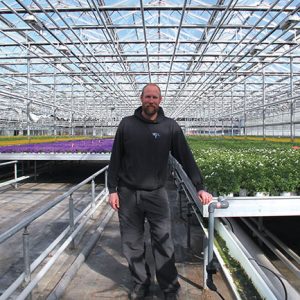 A bold new direction
Balancing flexibility with costs, Bold Robotics set out with their first greenhouse project – the mylar packaging machine. For Sunrise, Bold developed a working prototype that could handle 12 to 16 different products along with their individual packaging specifications. 4” or 6” pot, the particular crop, sleeve or no sleeve, location of the UPC – all the recipes are programmed into the controls for the operator’s ease of use.

“The robot picks the pot out of the tray and puts it on a belt. Robot arm grabs it, puts on the mylar, UPC, sleeves, and it’s ready for the box,” Bierhuizen says. Though the entire process sounds seamless, each step is a separate module, allowing growers to add, customize or remove each one. “We developed a pot cover module for this machine as well,” says Vandenoever. That way, operators can utilize the UPC printing and other modules to capitalize on their investment.

With all the modules in place, the packaging machine can whip through an average of 1,000 pots per hour, managed by just one staff member or more optimally, two. To optimize economy and packaging price, Bierhuizen has the machine running almost all hours of the day for one specific customer who orders daily and in high volumes.

“It’s not as beneficial if you have an order of around 200,” Vandenoever explains, particularly when it comes to switching between product sizes. “It’s not difficult to change the set-up, but you have to stop production.” While programmed controls will make most of the necessary adjustments automatically, some manual adjustments are required for different sizes. This downtime could be more costly for smaller runs.

Switching between crops is much more efficient as fewer manual adjustments are needed. Bold repeatedly tests each program for every greenhouse product, optimizing the settings before shipping out. “If we’re running tulips, we change the acceleration of the robot a little bit, just so it doesn’t snap the stem off,” says Vandenoever. “Same with the hyacinthe – especially if it has the bulb on. If you move it too fast, it’ll fall right out of the pot.” More robust plants, such as rosemary or lavender trees, allow them to increase the preset speeds on the controls, and further optimize efficiency.

With the core processes down pat, Bold is now turning their attention to flexible solutions intended for lower volume orders, as well as other repetitive tasks around the packaging process. 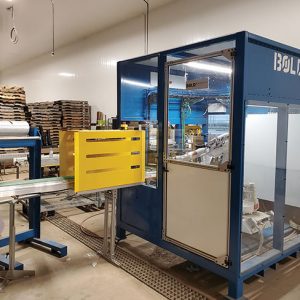 An outside view of the cell holding the robot. 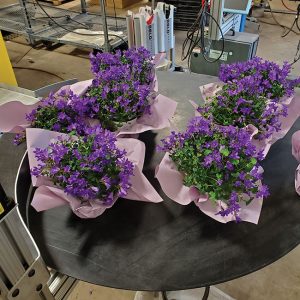 The completed product is ejected from the cell of the packaging machine.

Uncharted territory
“If I look at my production side in terms of potting, spacing, trimming – they’re all one-person operations,” says Bierhuizen, who’s already automated a number of steps in Sunrise’s production process. “I want to see that expand to my propagation and our shipping and processing.”

With a keen eye for identifying gaps in automation, particularly around repetitive tasks, Bierhuizen approached Bold about creating a machine for labelling pot covers. It would complement Sunrise’s newly acquired software, which automatically uploads purchase orders onto the cloud. To achieve this, Bold paired a pot-cover separating robot with a UPC application module. The result was a high-speed labelling system, capable of pulling purchase order data from the cloud, printing the information onto the UPC, and labelling each pot cover at a rate of 1,500 per hour. “Straight out of the box, they can put the pot covers into a conveyor. That will separate them, put the label on, restack them, and out comes a completed labelled stack of pot covers,” says Vandenoever. Capable of running unsupervised, it even comes with a barcode scanner to verify the information. “You can put multiple boxes worth of pot covers and just let it run overnight.”

Two other Bold originals are currently in use at Sunrise. The first is a bale hydrator that injects an adjustable amount of water into each bale of soil, typically around 50 to 60 gallons for optimal hydration. “You pull in the skids, four prongs come down from above the skid into the bale and the right amount of water is injected,” says Bierhuizen. Not only does it loosen up the soil and maximize the bale’s capacity, the machine reduces the space required compared to using a conveyor. “It’ll slowly release the water into the soil for an hour or so,” adds Vandenoever. From the console, the operator can control the volume of water and rate of flow based on their needs. “Just put the bale in and press play.”

The second is a robot called the Watchdog, which helps keep an eye on the potting stages. “The sensors monitor the system and look for anomalies,” explains Bierhuizen. “Say, if a pot hasn’t passed in four seconds, but passed previous sensors, the operator will get a warning, and a bell and light will go off.” Depending on the alarm’s severity, Watchdog shuts down the entire system unless the operator pushes a bypass button. “[This way], you don’t have dozens of pots falling off the belt before you realize something’s wrong.”

Several of Bold’s creations have been sourced by other producers and the team has received a high level of attention since debuting at the Canadian Greenhouse Conference last year. It’s their understanding of producers’ needs and the flexibility built into their customizable off-the-shelf solutions that set them apart.

“We look at automation as the ultimate solution, but you lose flexibility a lot of the times,” says Bierhuizen. “We’re looking for automation that’s flexible.”


Related
Transplanting takes a robotic turn
To water or not to water, ask the computer
Defining a technological future
State of the industry: Great expectations for the year ahead