Features Structures & Equipment Water and irrigation
To water or not to water, ask the computer 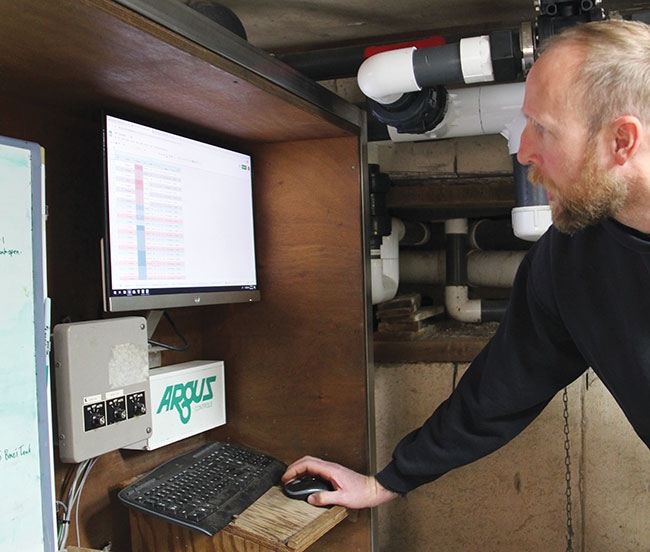 With so many other tasks requiring attention, modern greenhouses are beginning to integrate automated systems for crop moisture assessment.

At Sunrise Greenhouses, the operation runs on a self-developed, automated irrigation system. Each of the 13 underground concrete tanks feed into different crops, allowing the entire facility to use recycled irrigation – including the fields – and still have separate return drains for each zone. There’s also added flexibility in terms of fertilizer, compared to just one or two feeds.

“Prior to this, all of our tank selections were manual,” says Rodney Bierhuizen, owner and general manager of the greenhouse operation. Needing around 100 valves at a price of $600 to $800 each, the cost barrier alone would have been prohibitive. By using pneumatic valves and modifying the existing manual ones to a pneumatic cylinder, they were able to drop the price down to around $50 per valve.

But what really drove Bierhuizen to make the switch, was the retirement of his full-time grower of 35 years. With three irrigation units, Bierhuizen himself manages watering for half of the greenhouse, while an assistant grower oversees the other half. Before, they would need someone to manually select tank suction, return, feed and monitor levels. “Now this is all managed automatically,” Bierhuizen says of the Argus-managed system. All pumps were converted to variable speed frequency drives. “It’s more energy-efficient, and we get rebates from Ontario Hydro.”

Bierhuizen also attributes the project to funding from the Greenhouse Competitiveness and Innovation Initiative (GCII). Prior to this, he says, only certain projects would receive money, but with GCII, growers became eligible based on square footage. Those who didn’t have the financial resources previously to take on this technology became able to.

A computer spreadsheet helps manage their irrigation frequency, showing historical averages of the number of days between watering sessions at any given time of the year. While growers still walk the crop, the system provides an added layer of confirmation and efficiency, directing the grower to valves which are due for water or flagging possible valve malfunctions. For a third layer of confirmation, iUNU’s automated cameras monitor changes to plant health.

While the historical model works well for Sunrise, the greenhouse operation has also collaborated on an artificial intelligence-based smart irrigation project at Vineland Research and Innovation Centre (Vineland) that allows for predictive modelling in potted crops.

“Vineland came up with the core engine – the AI decision support system,” says Darren Ward, along with methods for training and running it. As the research institute’s manager of business planning and commercialization explains, “The grower would let the system know every time they water, and also put in a height measurement,” from the time they start on the crop until the time it’s shipped, training the system over a minimum of one growing cycle.

The system also connects to a network of wireless sensors for soil moisture and climate. Existing climate computer data can be used. All the information is fed into the AI-training algorithm, hosted on the cloud-based management system LetsGrow.com. “LetsGrow will send an email or text message, and from there, the grower can trigger their own water,” says Ward.

Slated for release this fall, the system has garnered positive results from tests in commercial facilities so far. One particular case reduced water use by 15 per cent and saved about $2,800 per acre per year on labour. The ornamental potted crop developed better root structure and quality overall, leading to more product shipped at QC.

As Ward explains, basing decisions on hard data rather than grower perception helps avoid unnecessary irrigation. “We noticed that this was something that happened during our testing. A grower might err on the side of caution and provide a little extra water during really hot periods, but the data itself may dictate that’s not the right thing to do.”

Whether historical or predictive, both systems have one thing in common: users still make the final call on watering.