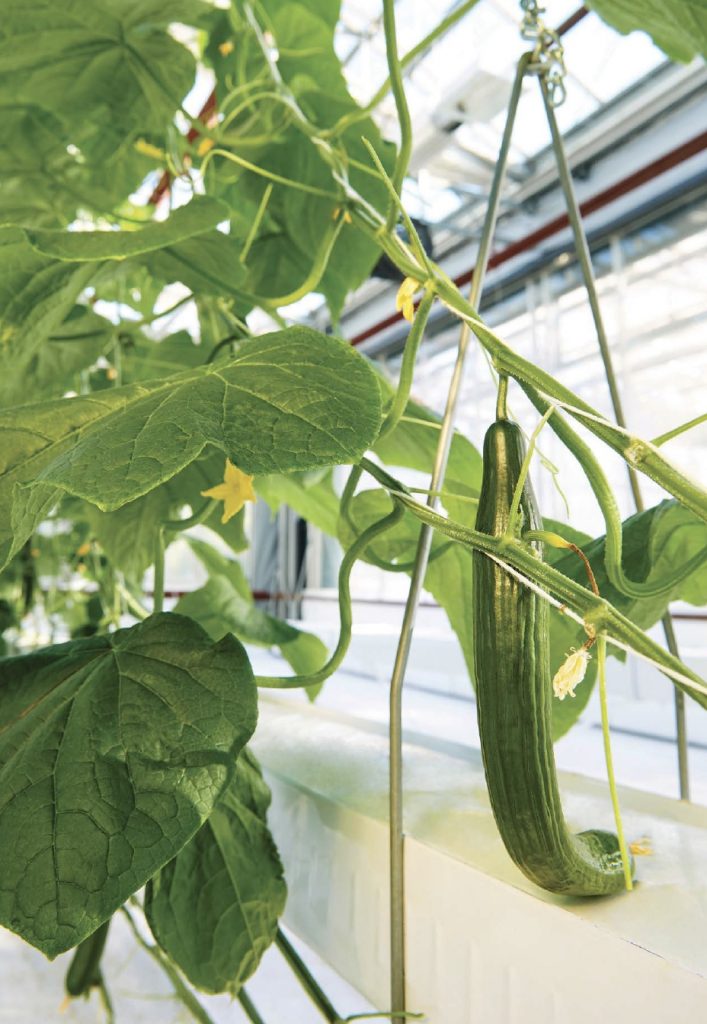 Canadian cucumbers are a hot commodity. Canada is the world’s fourth largest cucumber exporter with a farmgate value of cucumber production at roughly $326 million in 2014.

Amidst this strong production outlook, human labour — both cost and availability — are holding the industry back. Human labour accounts for roughly 30 per cent of total costs in cucumber greenhouses and harvesting — the most labour intensive production task — accounts for roughly 20 per cent of all work required to produce the crop. This translates into approximately $27 million spent annually on cucumber harvesting alone.

This has Canada’s cucumber greenhouse operators looking toward an automated workforce of robots to maintain or increase production even as labour pools shrink and labour costs grow.

With help from Agriculture and Agri-Food Canada funding, Vineland’s robotics and automation team is working to develop an autonomous robot capable of harvesting cucumbers in a greenhouse environment. By creating efficiencies and reducing labour costs, automated cucumber harvesting is expected to save a 40-acre operation roughly $1 million annually.

The challenge is to develop a robot that can harvest cucumbers as well as, if not better than, humans.

“It is not just a matter of picking an individual cucumber — the robot has to do it quickly along a whole row,” explained Brian Lynch, Vineland’s lead researcher on the project. “The robot must reach through vines to grab the cucumber, detach it from the vine and pull it back out (and not anything else), which is challenging for a robot. It wouldn’t take much to snag a vine and drag down an entire row.” To match the speed of a human picker, the robot needs to harvest one cucumber per second — all without causing damage.

Greenhouse cucumbers in Canada are typically produced using the “high wire” method, in which cucumbers are grown in a vertical, hanging configuration. Vineland researchers have been busy since 2018 visiting local greenhouses, trying to understand the nuances and challenges of harvesting cucumbers grown in this environment. The team has also started to build computer models on how high wire cucumbers grow, incorporating information such as where cucumbers are most likely to be found, their spacing and their ripeness.

Although the automated harvester is in its early stages of development, Lynch envisions a system that will deploy mobile robots mounted between rows of cucumbers in greenhouses. The robots would use a vision system and a series of complex algorithms to find and differentiate a ripe cucumber from surrounding leaves and vines, to reach out and grab it, harvest it, then place it into a collection bin.

Lynch’s team has made the most progress on the computer vision system. “We are starting to investigate using different sensors to look at colour, infrared, 3D scanning and combining these to search for and locate a cucumber in an image, determine if it is ripe and calculate how far it is from the robot.” This is the type of information the robot will need to do its job. “By 2020, we will see the vision system come together and we will have results indicating it is working.” The ability of the system to detect cucumbers at certain thresholds and levels of accuracy will be key measures of success.

Apart from its integration into the automated cucumber harvester, Vineland intends to commercialize the vision system as a stand-alone device. “The solution we need to find cucumbers and characterize ripeness can easily be applied to any fruit or vegetable with enough water in it, such as tomatoes, apples or peppers,” explained Lynch. In addition, “the applications of the vision system are also not just limited to harvesting. The system can be used for crop monitoring, for example.”

The Quebec-based National Optics Institute (INO) is an important partner in Vineland’s efforts to develop the vision system. Once Vineland completes the prototype, INO will take it and make it work as a more commercial-ready product.

The design of the robot will be improved by 2020. The plan is to explore different robotic arm designs, as well as gripping and cutting strategies, to see which designs work best in a vine environment. A prototype that can reach out and pick a cucumber will be ready by spring 2020.