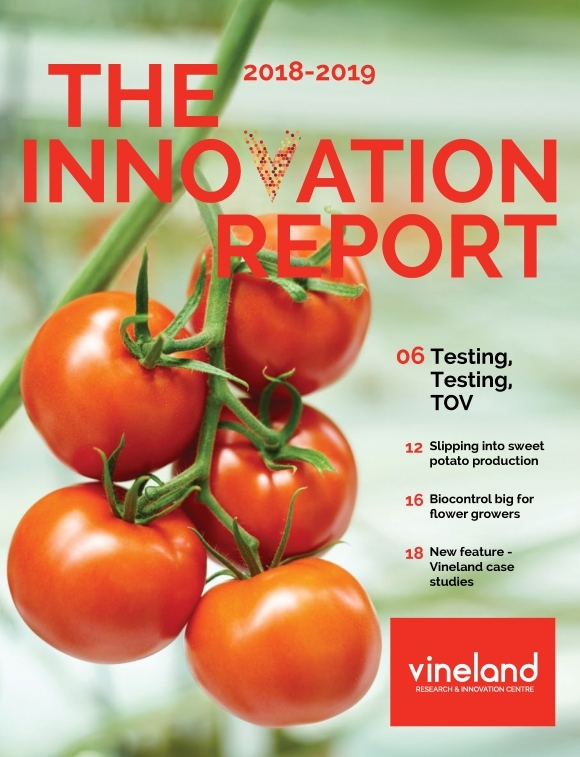 It’s no secret that horticulture faces labour challenges, but what’s being done in the sector to address them?

“We’re at a critical juncture in our industry,” notes Jim Brandle, CEO of Vineland Research & Innovation Centre in their 2018-2019 Innovation Report. “We’ve created a solution to the labour force availability with the Temporary Foreign Worker Program and the Seasonal Agricultural Worker Program but it doesn’t address the labour cost issue.”

In fact, the report notes that labour accounts for approximately 60 per cent of horticultural production costs. With increases in minimum wage and competition from low-cost imports, attention and research dollars are being turned to automation and artificial intelligence. And Vineland’s latest ventures focus on just that.

With a grant from Agriculture and Agri-Food Canada in hand, the research centre is helping to oversee a national network of new developments in automation, artificial intelligence and precision technology. The goal? To create new technologies that will help supplement human labour, improve yields and production efficiency.

At the time that Vineland’s report was released, three experimental projects had received funding to move onto the prototype testing phase: a smart greenhouse irrigation system that decides when to water potted plants, an automated cucumber harvester and a robotic mushroom harvester.

“We see this as a win-win for agriculture and manufacturing,” notes Tania Humphrey, Vineland’s data mining & optimization research scientist. “It’s good for Canada, too. The expertise, the companies, the people are here. It’s getting the manufacturing sector to focus on agriculture.”

Bringing world crops to market
Remember when Vineland was testing Asian eggplant varieties in the greenhouse? According to the Innovation Report, there are 87 acres of greenhouse eggplant production in Canada. While greenhouse production offers a longer growing season and better pest control, nine-month production of the crop could prove expensive due to lighting and energy needs – but new technology could change that.

Deadline for the tasty tomato looms
Earlier this year, Vineland opened their doors to show the public where they were with their tomato research. The goal is to bring a new, tastier tomato-on-the-vine to market by 2022. Six varieties are being trialled in Ontario greenhouses with Ontario Greenhouse Vegetable Growers. They’re looking at a number of characteristics, including disease resistance, ease of growth, size and shape, and of course, flavour based on consumer preferences. Three varieties should emerge from the 2018 growing season, then whittled down to two in 2019. If they have a clear winner in 2020, the seeds will need to be produced and marketed by 2021. It’s an ambitious timeline, but the research group expects the benefits to extend beyond Ontario and into Alberta and the Yukon.

For more information on the latest from Vineland, see their 2018-2019 Innovation Report.


Related
An automated workforce to harvest Canada’s greenhouse cucumbers
To water or not to water, ask the computer
Canadian AI company partners with Dutch greenhouse supplier
Robotics and automation could address production challenges