In a small greenhouse on a U-pick farm north of Calgary, visitors fill up on pails of strawberries plucked from DIY towers. 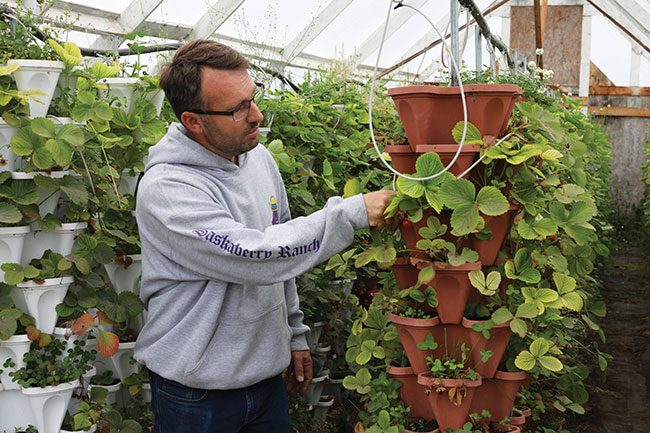 It’s an Alberta work-in-progress for sure, but it’s looking hopeful.

This year, the little homemade greenhouse located an hour northwest of Calgary held about 5,280 strawberry plants. ‘Amazing!’ was the most frequent remark as U-pick customers came through the entrance.

At eye-level, they were staring at towering, vertical rows of fat, bright-red berries and green leaves under the polymer roof. If any stopped to count, there were five rows of 24 towers. Each tower was stacked eleven containers high, with four plants per container, also known as pods.

During the first week of the season, picking was at shoulder level and above. By the end of the season, pickers were reaching down to collect strawberries at knee level or ankle level. Visitors could fill a pail on a single walkthrough in about five to eight minutes without putting a knee to the ground.

Business was booming at Saskaberry Ranch, a rare source of pick-your-own strawberries north of Calgary.

Operated by Phil and Christine Trenholm along with their four children, the mixed farm and U-pick ranch is on a 140-acre site they first planted in 1999. Phil is just three miles from where he grew up.

“We wanted something sustainable on a quarter-section for a family,” Phil says.

They started planting orchards of Saskatoons and raspberries, started raising a few small animals for meat and built a pair of greenhouses.

In July and August, streams of customers arrived with pails for U-pick and shopping bags for other products. Some fresh produce is available in September and October, including a second crop of strawberries, then the gates close for another season. Phil delivers about twice a month after that to designated locations. 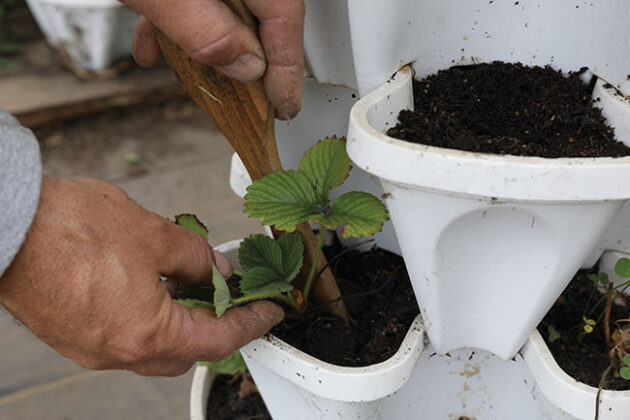 Each growing pod is 13 inches wide and is shaped like a four-leaf clover. One strawberry plant goes into each cup-shaped leaf.

Filling a demand
At Saskaberry, most U-pick is outdoors. It has about nine acres of Saskatoon production and a new orchard of raspberries is about to come into production.

Phil and Christine planted their first strawberries about ten years ago. On the website, Phil writes, “Initially we did not intend to grow strawberries, due to the labour involved, but because of numerous requests we started growing strawberries.”

At first, they provided elevated strawberry beds on four-foot-tall straw bales. The berries grew in soil-filled frames on top of the bales. It was low-density, vulnerable to hail and “too much work.”

That was when the Trenholm family decided to try vertical strawberry production. One 28×56 ft. greenhouse was available. It was covered with woven poly to protect the tender fruit and tall enough for vertical production.

Woven poly, Phil explained, is heavy, resists hail and diffuses the sunlight. The plants wouldn’t scald and would have light from all directions.

Phil needed to devise a vertical system for intense greenhouse strawberry production on the farm. He couldn’t find a Canadian system although two American companies were offering a possible option using pods of foam or plastic to hold the plants.

With more searching, he found stacking pods of UV-treated plastic available on Alibaba, the Chinese-based, ebay-type service. A shipping broker in Calgary worked with him to verify the transaction and eventually placed an order for enough pods to fill his greenhouse.

The shipment arrived during the 2018 growing season. Afterwards, they emptied and refurbished the chosen greenhouse. The A-frame structure has a pony wall on each side, about 5-feet tall. The triangular roof, with joists on eight-foot spacing, is attached to the pony walls. The steep angle minimizes hail damage.

As they set up for vertical production, they awaited the arrival of about 6,000 living, day-neutral Seascape strawberry plants from Nova Scotia. It came in April 2019. They ordered through the Alberta Farm Fresh Producers Association, a voluntary non-profit organization of direct marketing growers.

Production began in 2019
Phil decided to divide the greenhouse interior into five rows and seven walkways. The rows are 48 feet long. Walkways are about 38 inches between rows.

Growing pods are 13 inches wide and shaped like a four-leaf clover, with one strawberry plant in each cup-shaped leaf. A hole in the centre enables pods to be attached to a pole.

The entrepreneur attached 12 pods to seven-foot metal rods, on six-inch spacing. The towers are tied into a network (top and bottom) that supports itself but still has some ‘give’ as pickers work down the rows.

“We have the rods attached to guy wires across the top. That holds them all in line, so nothing gets knocked over,” he says. 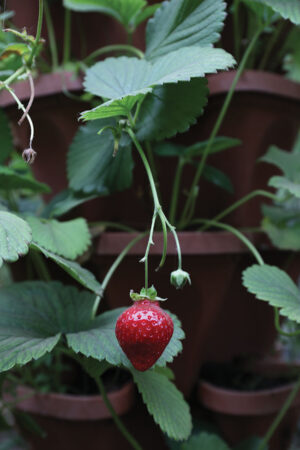 Strawberries grow in pods that are attached by metal rods and tied into a vertical system in the greenhouse.

Nutrients & water
Phil roots his seedling strawberries in a solid growing medium, a mix of peat moss and compost, differing from a liquids-only hydroponic system.

The compost is generated from sheep manure and bedding material that, a year earlier, was piled in spring and intensively worked so that the materials would rot down. He says, “We go from fresh manure to beautiful black soil in about a year, and it has no odour.”

Water for the greenhouse is collected in an outdoor storage tank. The family built an elevated framework of irrigation pipe and hose, hanging from the ceiling, to water the strawberry towers. Two emitters serve each tower, dripping into the top two pods of each column. The remaining pods are watered by top-down percolation.

The seedling shipment arrives in April and is planted by the Trenholm family in about two days. Labour for harvesting at least is not an issue. Their U-pick customers provide the labour, harvesting without the usual worries an employer faces.

Phil says, “With the U-pick scenario, you are going to take some losses. I have some damage with broken plants, some spoiled fruit, but I’m not having to pay labour. From what I hear from other growers, labour is their biggest headache and biggest expense. I’m willing to take a hit on production if I can avoid that [from] happening.”

Finetuning production
Phil made some modifications to improve 2021 production. “The first two years (2019-2020) we tried growing with just a peat moss/compost blend. It started good but it seemed like there weren’t enough nutrients in the compost to keep it growing all season,” he says.

The water volume required for sustaining good growing conditions in the lower pods meant that an oversupply of water was delivered to the top pods. And, he needed to compensate for the excess leaching in the top pods. Now, he injects some liquid organic nutrients.

“The biggest challenge for us would be more even irrigation,” he says. “The top has been almost over-wet. This winter (2021-22) I’m going to try modifying some pods so that I can get more water down into the lower levels without overly soaking the top. I’m hoping to achieve more even fertility with the organic fertilizer we drip through.”

He says, “Somehow my compost was loaded with clover seed this year. Any wild grasses, like quack grass, do not survive.” This winter they plan to steam the compost before filling the pods to see if that makes a difference in weed germination. 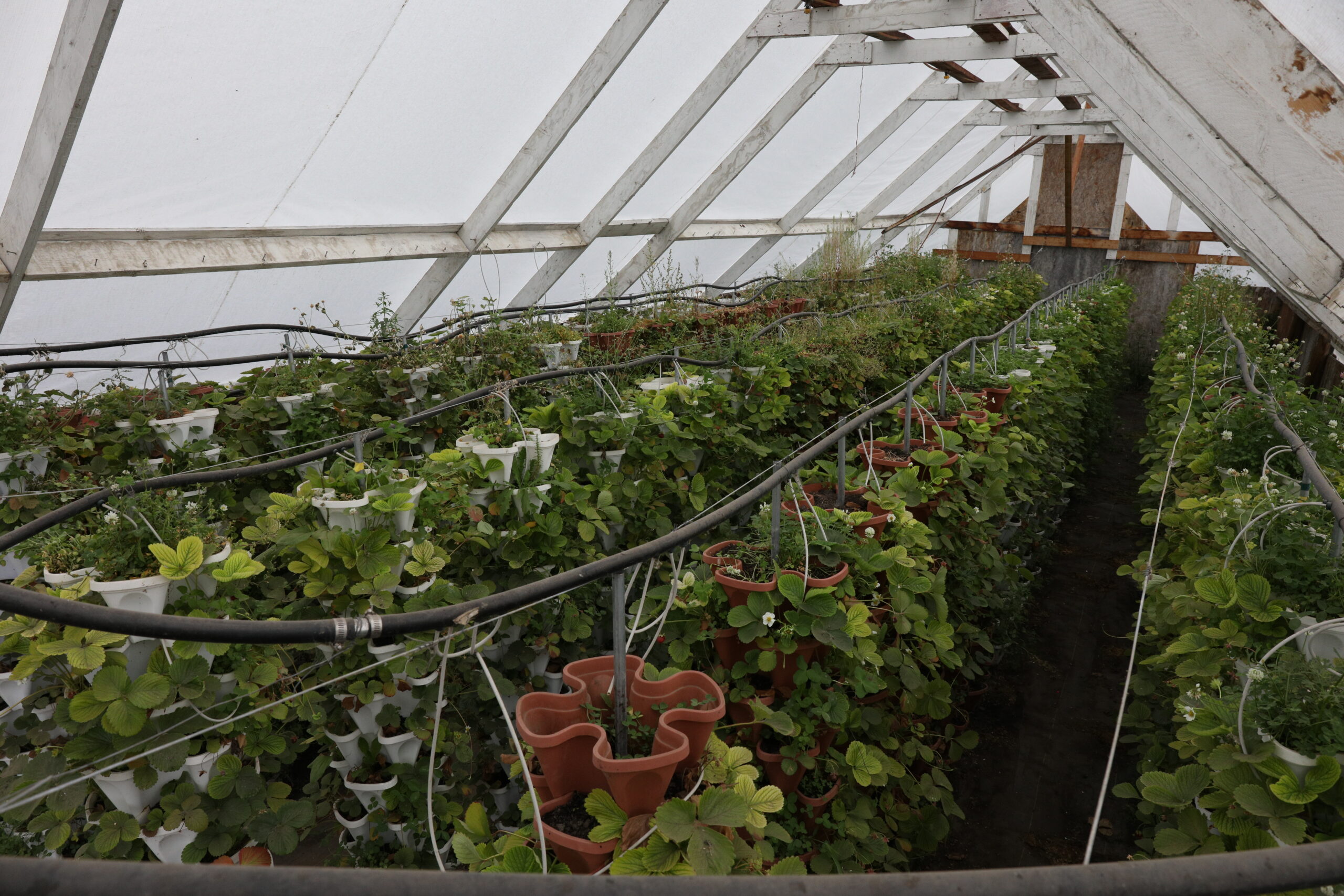 Work in progress
While their work increased on the small farm in the early years, Phil and Christine also raised four children. Today, the oldest is married and they have up to five helpers for the busiest times.

“We’re all involved. My kids help with planting, weeds and harvesting,” Phil says. “We are a fully functioning family farm. For the most part, everybody can do everything on here.”

Phil and his family foresee bigger things ahead.

“My kids want to get another greenhouse up,” he says. “I don’t think we have the time and energy for that now, so it’s likely that we’ll start expanding in 2022. I have a 30×70 greenhouse that’s all crated up and ready to go. I want to get the bugs out of the system I have, then we’re going to hit it and go.”

The vertical strawberry system is a work in progress. “We haven’t got it down to a science yet,” he says. “This year we’re a whole lot better than we were in 2020, so we are definitely improving our system.”

He adds, “Wherever you are, people seem to love strawberries. There are no other large U-pick strawberries operators around Calgary, so I have all the market I could possibly imagine. I believe this will work once we get the bugs out.”

John Dietz is a freelance writer based in Alberta.