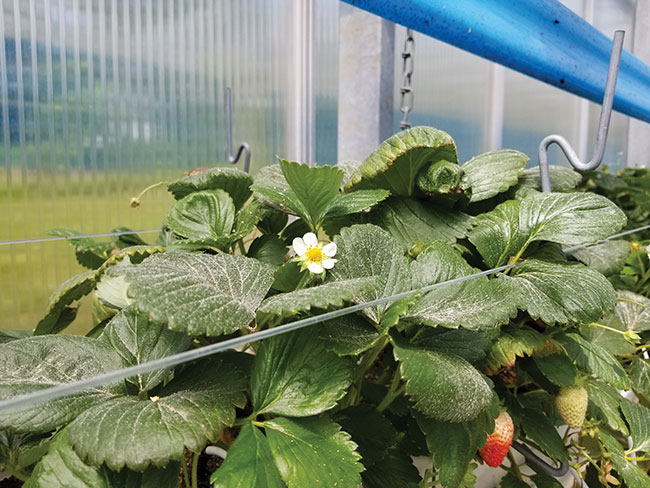 In recent years, greenhouse vegetable growers in Canada have had the benefit of combining managed pollination with the vectoring of biological control agents against pests and diseases – a bee-mediated technology known as apivectoring.

The technology improves both crop yield and quality, as proven for tomato and bell pepper production. It has also recently been adapted for soft and tender fruit protection against pathogens such as grey mold (Botrytis cinerea) in Europe, Colombia, Kenya and the U.S. So, when greenhouse-grown strawberries are attacked by pests, notably by the western flower thrips (Frankliniella occidentalis), it makes sense to exploit the hundreds of trips made by Bombus impatiens bumblebees, not only to improve strawberry crop yield, but to also distribute biological control products.

This technology was originally developed in Ontario and adapted for greenhouse application through collaborations between the University of Guelph, Agriculture and Agri-Food Canada’s Harrow Research and Development Centre (HRDC) and Ontario growers. Since then, a number of companies have also contributed to making it available to commercial producers around the world, including Biobest, BVT, and others.

One of the interests in this research has been to provide information required for label expansion of biocontrol agent products already registered with the Canadian Pest Management Regulatory Agency (PMRA) using this new dispensing mechanism. In Canada, apivectoring is currently registered for use with Botanigard 22 WP (Beauveria bassiana strain GHA). As a pollinator-vectored mycoinsecticide, it’s registered for use against whiteflies, thrips and aphids in greenhouse vegetables, ornamentals and herbs. 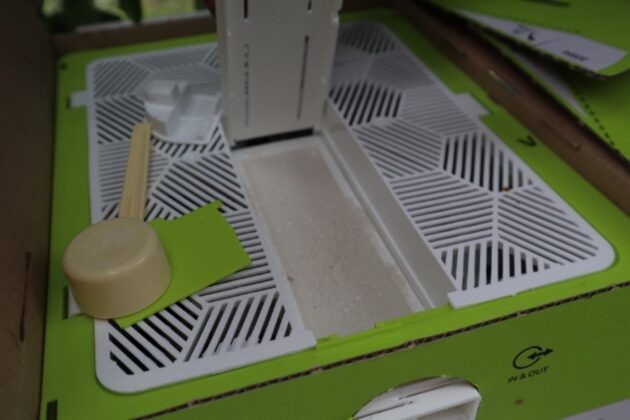 This Flying Doctors domicile has an entomopathogen carrying tray, where the bees pick up the product as they leave the hive.

In 2019, we embarked on a study to examine how apivectoring of biocontrol agents can be applied to protect the newly developing greenhouse strawberry sector in Ontario, a previously unexplored crop for this technology.

This study, supported by NSERC-Engage, assessed how well the biological control agent B. bassiana could be distributed by bumblebees to control thrips in soft and tender fruit greenhouse production.

The on-site study was conducted in a commercial greenhouse facility at SunRite Greenhouses in Leamington, Ont., which was complemented by laboratory microbiological assays at the HRDC. In the production greenhouse, a set of strawberry plants were randomly assigned for monitoring the effects of bumblebee pollinators serving as vectors of the thrips-controlling biocontrol agent. For comparison, control plants were placed in mesh screen to prevent bumblebees from accessing the flowers.

From the study plants, flowers and leaves were sampled and examined for the presence and levels of both thrips and the biocontrol agent. The level of B. bassiana infection in thrips was assessed by counting the number of colony forming units (CFUs) of mycelium that kill and grow from thrips collected from study plants.

The experiment was conducted three times over the growing season. The first two ran for one week, while the last was conducted continuously over five weeks. We assessed whether there were more thrips and thrips damage on flowers and fruit in the screened control areas compared to the treated areas in which biocontrol agent was applied via the bumblebee hive dispensers. 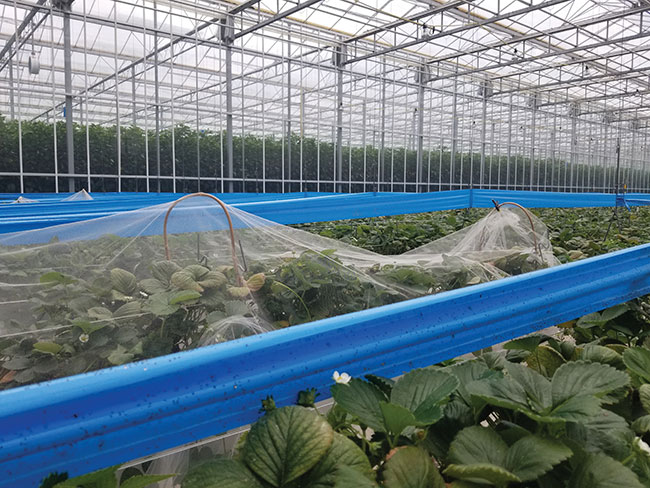 A mesh apivectoring exclusion zone was used as a comparative control to establish the effects of bee visits on the abundance of microbial inoculum in a commercial greenhouse strawberry crop.

Of the plant parts assessed for the presence of Beauveria, inoculum levels were highest in areas closest to the hive.

The first week-long trial recorded an average of 25,000 CFUs per leaf in two treatment zones closest to the bee hive. In contrast, only 83 CFUs were recorded per leaf in treatment areas that were more than five metres away from the closest bee vectoring hive.

For the continuous trial, inoculum levels on leaves were once again highest on the two treatment blocks closest to the bee hive, with an average of 6,500 CFUs per leaf. In contrast, no live inoculum was detected on leaves in treatment blocks that were more than five metres away from the closest bee vectoring hive.

Clearly, the distance from the hive is a critical factor affecting Beauveria presence and density. 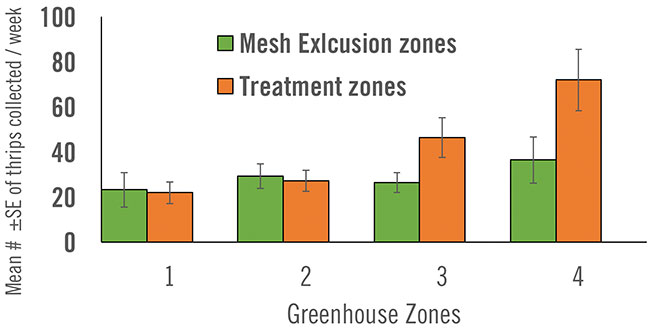 Interestingly, a small amount of inoculum also found its way into exclusion zones, possibly due to bee flight and inoculum loss over these control areas.

During the one-week long trial, only 175 CFUs were recorded in collected flowers from the exclusion zones, about six times less than those in the treatment areas at 1,075 CFUs. In the continuous trial, collected flowers from treatment zones returned an average of 660 CFUs, relative to an average of 700 CFUs recorded for the exclusion control zones. This difference between short-term and long-term trials suggests that conidial viability and thus detection are likely reduced over time.

As measured in the continuous trial, the impact of distance on inoculum abundance was clear for the exclusion zones as well. Leaves from the two closest exclusion zones had an average of 580 CFUs, while no viable conidia was found in the two most distal exclusion areas.

For both the week-long and continuous trials, there was a relatively high level of inoculum collected from leaves but a lower overall amount collected from flowers, possibly owing to their much larger surface areas.

For the first short trial, flowers yielded an average of 1,075 CFUs of Beauveria per flower. In this trial, leaves in treatment zones collected ten times more inoculum relative to flowers, surpassing 12,000 CFUs.

Similarly, for the continuous trial, levels of inoculum on flowers were lower relative to those on treatment leaves which carried on average 3,250 CFUs – almost five times higher than the flowers at 660 CFUs. 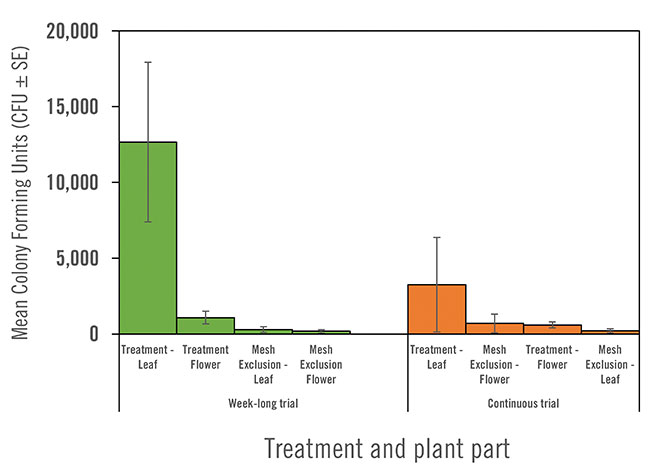 The average level of B. bassiana, measured as colony forming units (CFUs) on flowers and leaves. Samples were collected from within mesh exclusion areas (control) or open treatment zones after a one week trial (green bars) and after a continuous trial (orange bars).

In a second sampling period conducted during the continuous trial, flowers in the treatment areas carried an average of 380 CFUs, while those in the control blocks carried 150 CFUs. The number of conidia on these flowers was low. However, by this same date, so was the conidial count from foliage. For instance, leaves in the treatment zones had on average 42 CFUs compared to 1,000 CFUs in the control zones. Seemingly, as the bee vectoring period is extended to five weeks relative to the short one week period, the total amount of viable conidia remaining on the crop appears to drop.

While thrips numbers were too low in the first trial of this study to adequately measure the impact of B. bassiana on the thrips populations, thrips collected one week within the continuous trial yielded much higher levels of infection.

Among the thrips collected on that date, which died during a seven-day monitoring period, six out of eight (or 75 per cent) were found to be positive for Beauveria infection. With this however, also came a relatively high proportion of individuals among the dead control thrips also observed to be infected – six out of ten (or 60 per cent) were infected by Beauveria. It therefore seems that inoculum dropped by bees flying over top of the exclusion zones still affected thrips mortality.

We also sought to answer the question of whether microbial agents could affect pollinator health.

Of the 13 dead bumblebees collected directly from the crop range over the course of this study, only two of these (15.4 per cent) were positive for B. bassiana. Clearly, the task of vectoring B. bassiana was not an important factor in bumblebee mortality. 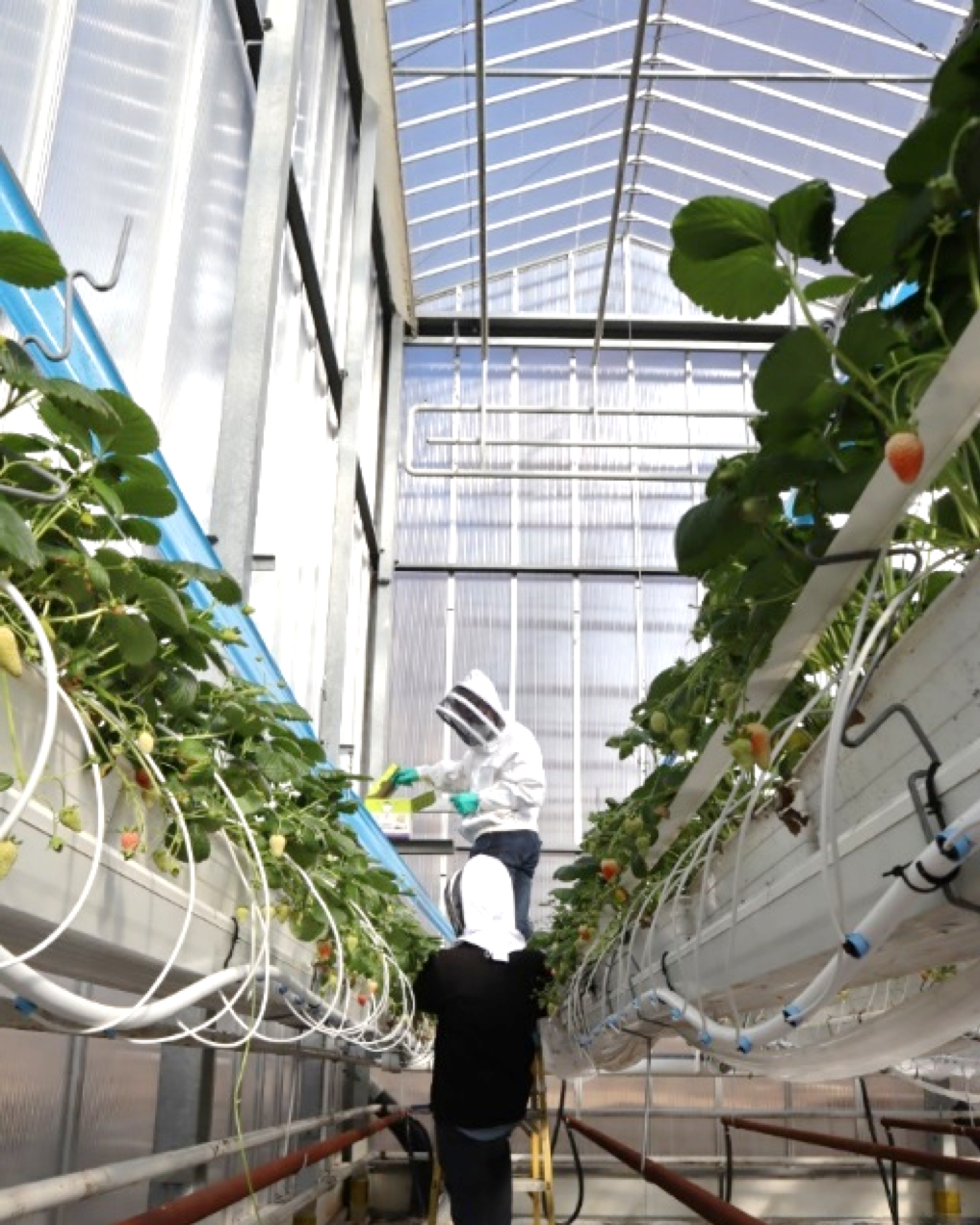 Overall, this research has shown that bee vectoring can be an efficient way to distribute entomopathogenic inoculum to strawberry plants, especially to foliage where there is a good chance that crop pests including thrips can become infected. However, there are clearly certain practices that should be established in order to maximize inoculum distribution and pest management efficiency of this delivery method.

First, hive placement and numbers should be maximized over a given crop area, with a minimum of three hives per half acre. Hives should be evenly spaced throughout the crop to ensure that inoculum is distributed everywhere. As we saw in our study, inoculum delivery is greatest within the area directly around each of the bee vectoring hives. In these locations, bee vectoring afforded the greatest level of crop protection. As bees travelled more than five metres away from hives, they delivered less inoculum to leaves or flowers. Possible future improvements to this type of technology would include incorporating more retentive or electrostatic carriers which would better adhere the biocontrol agent formulation to the bumblebee body, thus increasing the distance that inoculum can travel throughout the crop.

To date, the technology of using managed pollinators for the protection of crops from pathogens and pests has been successfully implemented under various cropping systems from orchards to a wide variety of outdoor-grown crops. However, this study was unique with respect to the target crop and delivery of the biological control agent. It also demonstrated that providing a consistent source of microbial inoculum can help reduce pest pressure over time. As a consequence, the insight gained from this research sets Canada’s greenhouse industry as a potential future leader in apivectoring technology with benefits to consumers in the form of higher quality production with fewer chemical inputs and residues.

Rose Labbé, PhD, is the greenhouse entomologist at Agriculture and Agri-Food Canada. Peter Kevan, PhD, is professor Emeritus, and Charlotte Coates is a research associate at the University of Guelph.

Related
Bioceres mycoinsecticide approved for greenhouse-grown crops
It’s all about the delivery
Beating the (pepper weevil) Beast
Taking on pests and diseases in cannabis: Vegetative to flowering