May 4, 2021
By Dr. Mohyuddin Mirza and Christie Pollack


May 4, 2021By Dr. Mohyuddin Mirza and Christie Pollack 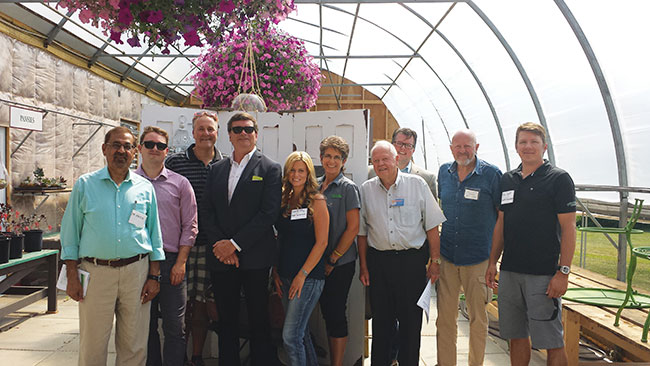 It was in May 1980 that the Alberta Greenhouse Growers’ Association (AGGA) was established.

Compelled by the vision of growing a profitable, globally competitive, and environmentally sustainable greenhouse industry in the province, the voluntary, non-profit organization emerged from a grower meeting held at what was then known as the Alberta Horticultural Research Centre, in Brooks, Alta.

Producers from across the province were in attendance, and many had been working with Dr. Mohyuddin Mirza, then provincial greenhouse crops specialist, to lay the groundwork for the AGGA.

“There was a diverse group of growers involved in the production of vegetables, bedding plants, ornamentals and nursery material,” Mirza recalls. “The needs were common [among] protected crops. Energy and marketing were two major motivators to have an association of greenhouse crop growers,” says the greenhouse consultant.

Bill DeVos, a cucumber grower from Redcliff, Alta. became the first elected president of the association and Mirza became secretary.

Over the next 40 years, the AGGA would become an essential body representing greenhouse growers from across the province. The organization is run by a devoted volunteer board of directors, made up of growers from all aspects of the industry along with key representatives from research, extension, teaching, and the allied trades.

Though the sector has evolved substantially, the association has not wavered in their mission to provide resources and assistance to its members in supporting research and technology transfer initiatives, marketing, education, and the profitability of the sector.

The period from 1980 to 1985 was a particularly challenging time for the industry in Alberta. Diseases and root knot nematode in soil led to drops in vegetable yields, threatening the sector’s economic viability. “Those early days were very interesting because greenhouse structures were very different. We were growing in soil, in dirt. There was no concept of hydroponics at the time,” Mirza recalls.

A sharp contrast from the climate in the Netherlands, Alberta researchers and extension specialists had to test and adapt techniques for their use. Through collaboration between the AGGA and Alberta Agriculture, soilless cultivation was adopted by 1985, turning the industry around.

As soilless systems and nutrient systems evolved, so, too did greenhouse structures. Hit by intense hailstorms, Alberta’s growers started turning from all-glass greenhouses to double poly. “But we are going back to tempered glass greenhouses,” says Mirza of recent years. Glazing materials have improved, allowing producers to harness more natural sunlight while standing up to the challenges of Mother Nature.

In the mid to late 80s, the AGGA and Alberta’s extension teams started a big push towards the use of biological controls, a technique widely adopted by the industry today. Combined with new varieties, advancements in production techniques, and innovations in energy efficiency, producers have been able to grow much more per unit area than they did in the past.

“It was 50 cucumbers per square meter. And now, our average is about 150, but our top growers are going 200+ consistently,” says Mirza, as an example.

In 1983, the value of the industry was estimated at $25 million. Nearly a quarter of a century later, a second report in 2005 put the value of Alberta’s greenhouse sector at $140 million. And the Alberta greenhouse industry continues to expand significantly, with vegetables at the forefront.

The first five acres of winter-lit vegetable crop emerged in Lacombe, Alta. 13 years ago, says Mirza, followed by expansion in southern Alberta. “We are now at over 60 acres of dedicated winter vegetable production.”

Advocating for the sector

In addition to supporting crop research and technology transfer activities, the AGGA actively lobbies on behalf of its members to government and industry, reacting to sudden events and effecting long-term change.

Relationships with provincial governing bodies have been very good, says Dietrich Kuhlmann, one of the founding directors and a past president. “Through the thick and thin of changes in political leadership and policies, we were able to convince the government that the greenhouse industry is a very important part of agriculture and thus needed support.”

In 1983, at the request of the AGGA, a greenhouse task force was created to examine and enhance the profitability and sustainability of the greenhouse industry, continues Kuhlmann. The resulting industry profile became a benchmark study for the Alberta greenhouse industry and many of the recommendations were later adopted by the province, leading to major improvements in energy conservation and resource sharing for marketing, extension and research. This also led to the creation of a greenhouse specialist position for Central and Northern Alberta, further unifying the industry across the province.

Since the first report’s debut in 1984, subsequent editions have been published every four to five years to help determine the health of the industry. The most recent industry profile was completed in 2019.

Energy has always been a key issue. In 1992, the AGGA played an instrumental role in developing and operating an energy conservation matching grant program. This helped growers upgrade their greenhouses and save on energy use. Then in 2019, following the introduction of a carbon taxation program by the provincial government, the AGGA was able to negotiate a carbon levy relief for its members, helping producers move forward with new investments and sustain their business.

At the peak of the first COVID pandemic wave, the AGGA advocated on behalf of ornamental producers and garden centre members for essential status. Their efforts were successful, setting an important precedent to the essential nature of ornamental horticulture in the province.

Ongoing education is a key mandate for the AGGA. Workshops and continuing education opportunities are top of mind.Photo credit: M. Mirza.

Education is a key mandate of the AGGA, and members not only benefit from workshops and seminars, but through multiple avenues of industry news. 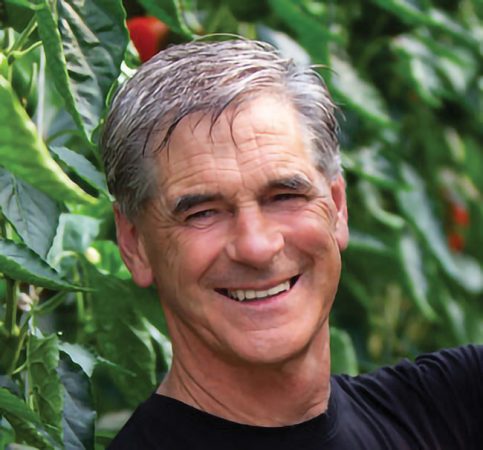 Albert Cramer, current president of the AGGA, notes that the founding members had profound foresight into the future of education and knowledge. As a result, members are regularly informed of research advances, advice, market trends, and association activities through a regular newsletter and members’ web site, and subscribed to national grower trade magazine, Greenhouse Canada.

In 1979, the AGGA collaborated with Alberta Agriculture’s greenhouse research program on a newsletter called Alberta Greenhouse Notes. Eventually, the AGGA started its own newsletter for members, which continues to this day. As the provincial government continues to consolidate horticultural resources, the AGGA newsletter remains a major point of connection for the industry.

In 1986, the AGGA board of directors at the time, which included then president, the late Ted Hole and secretary Dave Gourlay, successfully brought an international conference to Edmonton, Alta. Hosted by Bedding Plants International (BPI), the event put the Alberta greenhouse industry on the map and helped foster connections between growers in northern and southern parts of the province who experience vastly different growing conditions and cater to different consumer bases. The cost of registration was only $ 25.00 US.

From 1985 to 1992, the AGGA contributed its energy and resources towards the annual Alberta Horticultural Congress. Since then, the AGGA has joined forces with Landscape Alberta to hold the annual Green Industry Show and Conference (GISC). 2020 marked the first virtual edition of GISC, in light of COVID-19.

In 2004, the association established the Dr. Mirza Educational Scholarship Fund and the Dr. Ron Howard Research Fund, promoting horticulture among future generations and continuing to be a voice for new and established members. 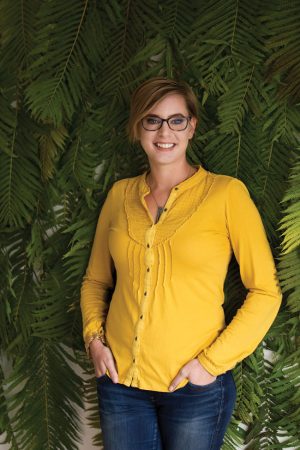 Christie Pollack is an active director of the AGGA board. photo credit: Jodi Sware.

For Christie Pollack, owner and operator of Christie’s Gardens and Greenhouses in High Prairie, Alta., she first joined the AGGA in 2012, even before she had built her operation. “My background’s in horticulture, but when you’re stepping into it, it’s so different!”

An active member of the AGGA, Pollack joined the board in Nov. 2017 and witnessed the impact of the AGGA’s work from another perspective, one that spurred her to appreciate the organization’s work even more.

With goals to reach a younger generation of growers, as well as diverse groups across the province, Pollack is spearheading a complete revitalization of the AGGA website that is slated to come online in late April. The new site will allow members to connect with each other and with the association, as well as access exclusive resources.

A growing role in consumer awareness

Through the COVID pandemic, the AGGA has watched the popularity of plants and gardens increase among consumers. A new and invigorated audience seeking plant material has reignited the energy of the greenhouse industry, highlighting a growing area in which the AGGA can play a key role.

“The idea is that we can bring the AGGA forward and now bring the consumer messaging piece that we’ve never had before,” says Pollack. Her passion for plants and approachable plant care expertise has earned her a loyal following on social media. Last year, she kicked off a month-long food growing challenge for consumers and recruited fellow AGGA board members Nadine Stielow of Thiel’s Greenhouses, Debbie Foisy of Deb’s Greenhouses and Jason Anderson of Kathy’s Greenhouses, to coach participants.

Areas such as Pollack’s neck of the woods are less greenhouse-dense, with perhaps one garden centre within a two-hour driving radius. That is also why the new AGGA website will include a public directory and map, promoting their members’ businesses among consumers in Alberta.

The COVID pandemic ushered in the need for growers to use digital products including e-commerce websites, webinars, social media, newsletters and more, in an effort to sell and connect with consumers. If anything, this moment in history has helped to unlock more opportunities for the greenhouse industry as a new age of digital-savvy growers expand the AGGA’s role and reach into exhilarating new territory.

The late Honourable Lois Hole was Lieutenant Governor of Alberta from 2000 to 2005. She was also a well-known horticulturist, book author, and educator. She played a significant role in the AGGA’s progression into a true, grassroots growers’ organization. 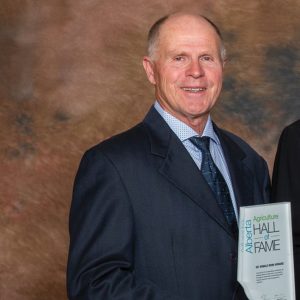 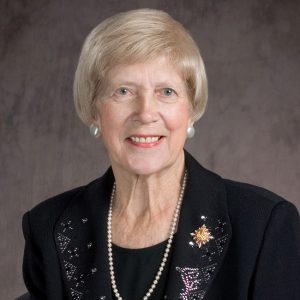 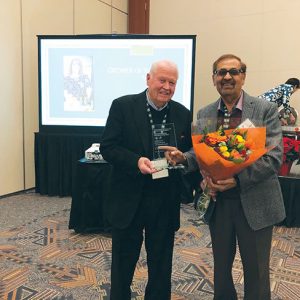 
Related
Inside View: Learning in a post-COVID world
Grower Day talks next generation and COVID planning
Building the Yukon’s future in local food production
Growers come out ahead in tumultuous times