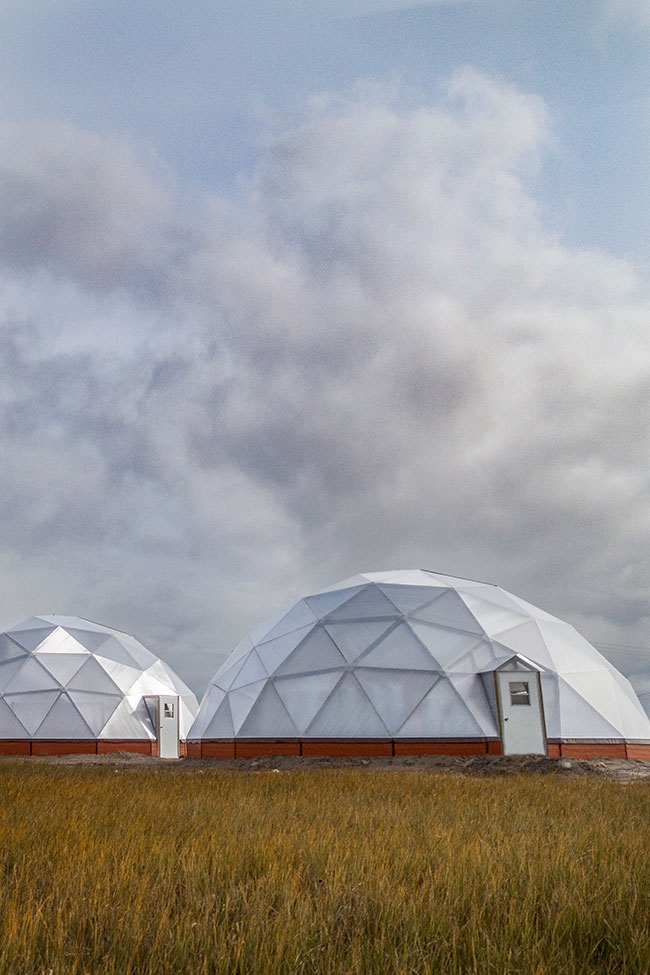 Growing North’s two new domes in Arviat, Nunavut are expected to be in operation for Spring 2019. Photo credit: Stonewood Collective

Eight-dollar heads of lettuce in Churchill, Manitoba. Twenty-seven-dollar bunches of asparagus in Fort Smith, Northwest Territories. Thirteen-dollar cauliflower in Iqaluit, Nunavut. For any Canadian paying attention, it’s no longer a dirty secret that food costs a lot more in the north than other parts of the country and that people are struggling to afford it.

This is particularly true in Nunavut, where, according to a 2016 report from the Conference Board of Canada, one in four people are moderately to severely food insecure. For Nunavut Inuit, that number rises to just over fifty per cent of the population. In other words, about eight thousand people in the region don’t have reliable access to a sufficient quantity of healthy food they can afford.

The reasons for these sobering numbers are complex and multi-faceted, ranging from high shipping costs to poverty to declines in plant and animal populations to climate and geographic challenges. Yet as seemingly impenetrable as these barriers appear to be, there’s a growing number of tech-savvy entrepreneurs who disagree. And they believe indoor farms and greenhouses are one of the keys to begin getting more nutritious, affordable food into the hands of people who need it most.

Growing North
One of those entrepreneurs is Ben Canning, who grew up on a farm outside of Toronto. While his family was able to produce their own food, he realized that this wasn’t the case for all rural Canadians – especially those living in very remote regions. About five years ago, he and Stefany Nieto launched Growing North as Ryerson University students. Their goal was to help northern communities — particularly in Nunavut — become food sovereign by building infrastructure that sustainably grows fresh produce.

“As we were doing our research and visiting Nunavut,” says Canning, “one of the things we kept hearing was that all the tech exists for this, and it’d be so easy to do it for even six months of the year, but no one was actually doing it. We got sick and tired of hearing that, and so decided we were going to do it.”

And what they did was purchase a Growing Dome greenhouse kit from a Colorado-based company called Growing Spaces and take it to Naujaat, Nunavut, an Inuit hamlet on the northern shore of Hudson Bay right on the Arctic Circle.

There they and a group of locals constructed the 1,300-square foot polycarbonate dome with a large tank of water on the north side that acts as a thermal mass, helping keep the internal temperature between 20 and 25 degrees Celsius. Water itself is trucked in from nearby freshwater lakes, though they save about 20 times more water than with traditional methods by using a feedback loop system.

They chose this particular greenhouse dome because it came with everything they needed and, more importantly, it can withstand winds of up to 170 km/h and seven feet of direct snow. It’s also culturally relevant (people in the community call it their “green igloo”).

Inside they use raised soil beds and 1.5-metre-tall vertical hydroponic towers to grow a wide range of leafy greens — kale, spinach, lettuce, chard — and other veggies like carrots, turnips, potatoes, beans, beets, radishes and cauliflower. It all gets sold at farmers’ markets and to a food bank at about half the cost of what’s available at local stores.

All of the technology has been working quite well, says Canning, but the biggest challenge has been figuring out how to best deliver education around growing food. What some may perceive as common knowledge — like where a bean comes from or potatoes grow underground — is not necessarily known due to cultural and geographical differences. To address these knowledge gaps, they’ve incorporated a few different educational pieces including an Arctic Farmers Program wherein they teach horticultural practices, entrepreneurship and healthy eating in the local high school.

Right now, the greenhouse is in operation for six months of the year, but this year will be their first foray into winter growing, which obviously has its own technological challenges to overcome (more on those in a minute). Two more year-round Growing North greenhouses are in the works for Arviat, Nunavut, about 700 kilometres south of Naujaat.

Growing North’s two new domes in Arviat, Nunavut are expected to be in operation for Spring 2019.

The Growcer
The Growcer’s year-round indoor farms couldn’t be more different than those of Growing North. Instead of polycarbonate domes, these are 40-foot-long enclosed steel rectangles — as in refurbished shipping containers once used for transporting food. Inside, it looks like a mini supermarket with a central aisle and shelves on the left and right where usually leafy greens, some brassicas and herbs grow. The difference is that LED lights are on the underside of each shelf.
Right now, the Ottawa-based company has eleven of their systems in the north: one in Kugluktuk, Nunavut, another in Kuujjuaq, Quebec, a third in Churchill, Manitoba, and eight more in Alaska.

Co-founder Corey Ellis says that they went with shipping containers because the economics made sense. “One of the big reasons why working in the north is expensive is just because of the remote nature of the work and the shipping costs. And so if we were able to eliminate that by giving the shipping company a standard platform that they’re used to seeing, we wouldn’t incur any higher costs.”

The base price for one of these is about $180,000, in addition to a two-day installation and a three-day training session. After a few months, most operators only need to spend about 12 to 14 hours per week managing the farm, says Ellis, because these are essentially “plug-and-play” systems. That is, they come with everything needed, and only require power, a 1,900-litre water refill every month, a 20-pound propane tank and an annual material replenishment.

For most communities, these are also commercial systems intended to generate a profit for owners. Which is another reason why they went with shipping containers, says Ellis. “We’re finding that as people make investments and earn money, they reinvest those and buy more systems that can be locked right into the other containers.” Some of those systems are commercial kitchens and dry storage units, which The Growcer also sells. “It’s kind of like Lego pieces coming together to adapt to each customer and what they’re trying to do.”

For northern consumers, who usually buy Growcer-grown veggies from grocery stores, it all means lower prices. That eight-dollar lettuce in Churchill, Manitoba, for example, now costs about half that.

Energy Challenges
As different as Growing North and The Growcer are in their technological approaches, both have a common foe: high energy costs. In the Northwest Territories and Nunavut, households pay, on average, more than 30 cents per kilowatt hour (kwh) — the Canadian average is about 13 cents per kwh. In Naujaat, Nunavut, where Growing North’s first greenhouse is located, residents pay over 70 cents per kwh.

The Growing North team is well aware of these numbers, and they know that if they want to use LEDs and still heat the greenhouse this winter, they need to come up with a financially sustainable solution. That’s why they’ve experimented with a few different options, including a combined heating and power unit designed by Ryerson’s engineering department that would take organic material like compost, coffee grinds and even clothing and convert it into power.

They believe a more likely solution, however, will be something that harnesses all of the sunlight the community gets in the summer, which is about 20 hours per day at its peak. “We’ve been talking with the energy company about net metering essentially, where we provide much more solar energy to them in the summer and then pull it back when we need it in the winter,” says Canning. “It’s not as green as we’d like it to be, but it could potentially work.”

With The Growcer’s self-contained systems, owners can also use solar power, or connect to the grid or use oil or natural gas. But Corey Ellis says that because the containers are so well insulated, they don’t need to be heated all that much until the outside temperature reaches about minus 25 degrees Celsius.

All of those LED lights also help with keeping things toasty inside, he adds. Before landing on the LEDs they did, they compared about three dozen suppliers. They went with these, which are at the higher end of the price spectrum, because they’re a lot more efficient than most they’ve investigated. “And even though they are expensive, those costs are recouped over time because you’re saving so much on power,” says Ellis.

How Secure?
The one downfall with The Growcer’s LEDs, however, is that they’re mostly conducive to growing leafy greens. And as people like the Northern Farm Training Institute’s Sheldon Frith has pointed out, in order for communities to have true food security, they need access to more calorie-rich foods like root crops, domesticated grain crops, tree crops, and meat and dairy products from animals.

“Genuine food security means that when the ice road is closed, or the airplane can’t fly, the community can still feed itself the staple foods needed for survival and basic health,” Frith wrote in a 2017 CBC opinion piece. “This means that northern communities need ultra-stable, and local, sources of calorie-rich foods.”

It’s a valid criticism, says Ellis, but he also adds that food security is not just about calorie-dense food. “It’s a really complex issue with socioeconomic layers to it as well. Despite bringing down the price of food, if people are still poor, they’ll still struggle to afford it even if it’s half price. So what we provide is a solution that will employ people, create economic opportunities and create a profitable business.”

Ben Canning thinks the criticism is a valid one, too, and he’s actually had conversations with Frith about it. Those conversations led Growing North to install more soil beds that can grow more calorie-dense root vegetables. They also led to an interesting idea that the Growing North team might put in place soon: focusing all or some of the proceeds generated from farmers’ market sales to hiring hunters who can provide meat for the community.

“It’s kind of taking it full circle that way,” says Canning, “and saying, ‘Yes, we’re growing plants, we’re growing vegetables, which isn’t necessarily a traditional diet, but we’re using it as an economic means to go and secure more food.’”

It’s clear that only through creative and somewhat non-traditional ideas like these — and like the technological ideas Growing North and The Growcer have put in place — that those appalling food insecurity numbers in parts of the north will begin trending in the opposite direction.

“This is not something that should continue any longer, and there’s no reason for it to continue,” says Canning. “We have all of this technology to do something, and the fact that people continuously say to us that it is possible is a huge kick in the butt for us to say, ‘Okay, let’s go do it then.’”