From sensor controls to vertical farming, this horticultural lighting expert and seasoned researcher reveals what’s new and ahead. 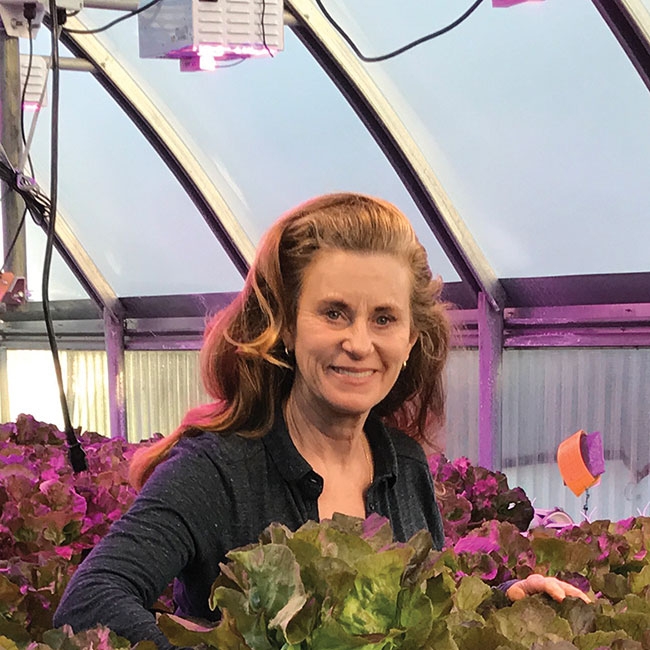 Horticultural lighting applications have increased exponentially over the past few years.

To better understand why and what’s next, Greenhouse Canada sat down with Dr. Melanie Yelton, vice-president of research at LumiGrow.

Q: Where do you feel the greenhouse sector is, in its current knowledge and use of horticultural lighting?

M: Greenhouse lighting is getting more and more sophisticated on multiple levels. Before, growers would put in what they could afford. But now we can do the math to understand how much it costs. If you don’t light or if you light in a subpar way, you’re not getting as much production as you could.

Q: We’ve heard the term ‘Daily Light Integral’ (DLI) a lot. In short, what does it mean?

M: Think about it like rainfall. If we think of light being raindrops of photons falling onto the earth, it’s a measure of how many photons fell down from the sun that day, measured in “moles”. Monthly DLI averages tell us how much supplemental lighting you would need in March if you want the same DLI – and by extension, the same growth rate – that you had in July.

The exciting thing happening in DLI work is with NASA data. We can now look at daily DLI averages for the past five years within 34 miles of any farm in the world. Perhaps a grower can’t afford to make their light levels like July all the time, but we can look at the economics of meeting their optimal DLI 75 to 80 per cent of the time. By supporting those plants through the winter, growers can commit to a grocery store or market and be confident that they’ll make that deadline.

Q: There seems to be a lot of adjusting going on. Can lighting be controlled automatically?

M: Traditionally, growers would set a turn-off point at a certain wattage for threshold control. From their growing experience, they would think about the weather today, the forecasted weather tomorrow, and when their lights should turn on and off. Some growers are quite good at it, but it’s time-consuming and takes them away from other tasks.

We have a light sensor that can measure the ambient light coming into a greenhouse and automatically respond to it. Say you’re growing lettuce and you’ve set a DLI at 17. If it’s been a medium-winter day and the sensor has received a DLI of 7, it will supplement another 10 moles of light to meet that need. Another thing our sensor does is it integrates and makes predictions. It uses data from the previous three days to predict what the next day will be. If there’s been a run of sunny days, maybe it won’t light as aggressively in the early morning. It’ll wait and see what the day looks like. If it needs to make up the extra light, it will. We’re looking to integrate more predictive data from weather sources in the future.

Q: There’s a lot of talk about underlighting. Can a plant ever have too much light?

M: Definitely. In an experiment we did at Harrow Research Station this past winter with Dr. Xiuming Hao (AAFC) and Shalin Khosla (OMAFRA), we had two rooms of tomatoes under traditional threshold control at a 300 W/m2 cut-off, and set two other rooms under sensor control at a relatively low DLI of 18. Traditional threshold control is designed to turn lights off when the light intensity outside exceeds the predetermined cut-off. At the end of the experiment, the average DLI in the threshold-controlled rooms was about 27. It was spot-on at 18 in the sensor-controlled rooms. As it turns out, there wasn’t any more production in the higher DLI areas compared to lighting at the right level. The plants can’t utilize it.

In the case of lettuce, overlighting is detrimental. That’s where shade curtains become very important. High-light plants like tomatoes and cannabis are more tolerant to overlighting, but lettuce is very tender and can burn very easily.

Another concern is temperature. HPS lights run hot. It’s more of a concern in cannabis, because they tend to grow closer to the lights. With LEDs, you can actually touch them. I’ve never seen burning, but I’ve seen a little spot of bleaching if the leaf is right on top of a diode, with the rest of the leaf appearing fine.

Q: Is there an advantage to using either HPS or LEDs with sensor controls?

M: With HPS, you had the ability to turn lights on and off and use a pyrometer at the top of your greenhouse to determine the light intensity outside. But to protect HPS lights, you have to let them cool down and warm up and be more cautious with how frequently you turn them on and off. With LEDs, you can turn them on and off in a microsecond without damaging them. They can respond very nimbly in response to the light levels in the greenhouse.

Q: More growers are taking advantage of vertical space these days. Would lighting be set up any differently?

M: For vertical growing inside a warehouse, you would need a software to designate a consistent DLI for each level. You set the DLI and forget it.

Another stacked situation that we’re seeing more and more of is where people are growing vertically inside a greenhouse, such as cannabis and strawberry growers. The top level gets more light because it doesn’t have the obstruction of the next level over it.

Ornamental growers have that experience with hanging baskets, using the natural differentiation in light levels to have their higher light plants on top and lower light plants on the bottom. If you don’t have those differences but you want to grow the same plants only on different levels, we can put a light sensor on the top level which will measure ambient light and adjust it. The second level is almost like a greenhouse that doesn’t have as good transmission, but the amount of light tends to be relatively consistent. Looking at how much shading occurs from the top level allows us to make calculations. You might have 90 per cent transmission on the top level, then half as much light on the second level of that stack. We can then adjust it to create the light that the second level needs. It’s utilizing the sun, but also being smart about using vertical space that’s available.

Stay tuned for part II of our Q&A with Dr. Yelton, as we look at how light spectrum can be used to tweak crop growth, improve quality and even deter disease.

[Editor’s note: responses were edited for length and clarity.]