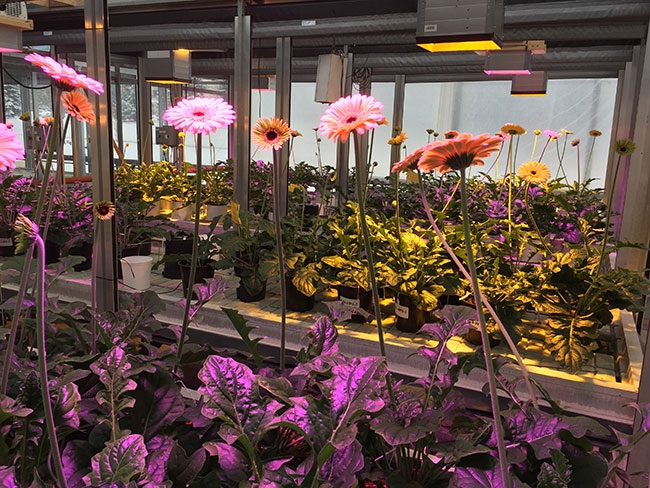 HPS users can still save energy by using various control strategies such as a timer and light sensor, turning on supplemental lights when natural light levels are lower or when electricity is cheaper.

Numerous articles have extolled the virtues of modern LED lighting technology for horticultural applications, particularly as a replacement for HPS in greenhouse environments. Various LED technologies have been proven to achieve comparable or better commodity-specific production metrics to HPS in many different greenhouse production scenarios.

Horticultural LED systems have been touted as having greater energy efficiency, longer functional life and spectral tuning capabilities (i.e., light recipes) which may enable growers to steer the growth of their crops without chemical inputs.

Less heralded benefits for LEDs in greenhouses are derived from their potential for infinite dimming, which HPS cannot do. Note that some HPS do have rudimentary dimming to discrete levels, for example turning a 1000W to 600W or 400W; however these are not widely used in greenhouses. While not all LED systems on the market have built-in dimming, this capability is fundamentally intrinsic to how LEDs convert electricity into light. Dimming capabilities offer the greenhouse grower two main advantages:

Energy savings
A major limitation of HPS technologies with respect to light control is that they are not instant on/off devices. They usually require a few minutes to warm up to full power and also to cool down before the lamp can be turned on again. With this in mind, HPS users still have various control strategies for saving energy by limiting the use of supplemental lighting during periods when natural light is sufficient. A simple strategy uses a timer (usually part of the greenhouse control system) to limit lamp operation to only the ends of the photoperiod when natural light is habitually lower, or to times of day when electricity pricing is cheaper. More advanced strategies employ some type of light sensor, usually located outdoors, to control the duty cycle of the HPS lights based on user-defined algorithms of varying complexity. The two most common sensor types measure:

Note that because the energy of photons depends on their wavelength (i.e., colour), it is not possible to directly convert between PPFD and radiation units when multiple light sources are combined. Using the two sensor types above, control algorithms usually depend on either threshold levels of natural light (instantaneous), accumulated light over time or a combination of both of these factors. With threshold control, a programmed value of ambient light triggers the HPS to turn on/off; usually accompanied by a 10 to 15 minute (or more) time delay to avoid rapid cycling on variable cloudy days. Accumulated light or light sum is usually measured over 24 hours and expressed as daily light integral (DLI, in mol·m-2·d-1 or kJ·m-2·d-1), but longer time periods are sometimes used that reflect a timeframe relevant to the crop’s production cycle. Supplemental lighting can then be provided (varying the length of time) at the end of the natural photoperiod in order to make up the difference and achieve a specific accumulated light sum target. Some algorithms are predictive as well, utilizing both instantaneous PPFD and trends of average PPFD and DLI from previous days.

PPFD control adjusts the supplemental light intensity in real time in order to maintain a constant PPFD at crop level. Picture the supplemental lights getting progressively brighter and then dimming again as a cloud passes. The main benefits of this strategy are reduced energy usage when supplemental light is not needed and more uniform crop-level PPFD. This reduces stress and maintains optimum crop productivity by minimizing fluctuations in light intensity. These benefits are seen daily during dawn and dusk, as well as on days with highly variable natural light. LumiGrow’s smartPAR™ system can utilize their fixture-mounted smartPAR Light Sensor Modules™ to monitor natural light just above the height of the fixtures (i.e., at gutter level), and then control the output intensity of their PRO325™ and PRO650™ lights in real time; effectively using the sun to manage the control for the supplemental light. LumiGrow has posted an excellent video on their website and on YouTube that very clearly demonstrates the capabilities of their lighting control system in a real-world setting.

HPS users can still save energy by using various control strategies such as a timer and light sensor, turning on supplemental lights when natural light levels are lower or when electricity is cheaper.

DLI control enhances the PPFD-control concept by integrating additional input factors such as upper/lower PPFD thresholds, time-of-day electricity pricing, latitude and historical PPFD data into a predictive algorithm with the goal of attaining a target DLI as efficiently as possible. DLI-control strategies have similar potential to enhance crop productivity by lowering fluctuations in canopy-level PPFD, while simultaneously minimizing energy use and cost. Further, balancing the amount of photosynthetic light the crop receives during each day allows the grower to maintain stable production schedules. This is critical for some commodities such as microgreens, vine crops and cut flowers, where the markets demand consistent production year-round. We beta-tested a DLI-control system from Heliospectra by growing cut gerbera (variety Alliance) during the 2016-17 supplemental lighting season (pictured above).

Experimental design
The experiment benchmarked DLI-controlled LEDs against conventional threshold-controlled HPS. Both treatments had similar mean supplemental PPFD, light distribution and photoperiod. The DLI-control treatment used Heliospectra’s HelioCORE™ feedback-control system with an integrated canopy-level PPFD sensor, to manage their LX602G grow lights. It was programmed to target a canopy-level DLI of 7 mol·m-2·d-1. For the HPS treatment, an outdoor radiation sensor managed its duty cycles using a threshold of 375 W·m-2. This was selected based on historical data measured in the same greenhouse to also target 7 mol·m-2·d-1 with an average daily runtime of about 8.75 hours. Each treatment was replicated in four separate plots all located within a single greenhouse section. For the whole trial, the overall mean canopy-level DLI were 7.8 and 7.1 mol·m-2·d-1 for HPS and LED treatments, respectively, with about 3.5 mol·m-2·d-1 coming from ambient light.

What we found
There were no differences between treatments on the number of flowers initiated and harvested, or per cent marketability. Flowers under HPS developed about five per cent faster, but had seven per cent lower fresh mass and four per cent shorter stems than those under LEDs. There were no treatment effects on leaf area or leaf dry mass at the end of the trial, indicating that vegetative biomass was similar for both treatments. While the cut gerbera plants were similarly productive under both supplemental lighting treatments, the DLI-controlled LED treatment utilized about 15 per cent lower lighting capacity. Light intensity is fixed at a set level for HPS, but this varied between 0 and 100 per cent for the LEDs due to its DLI-control algorithm.

Lighting capacity is defined as the product of daily run-time and instantaneous intensity settings, similar to how DLI is calculated from logged PPFD data. Speaking in terms of lighting capacity allows us to generalize for any lighting technology, regardless of the manufacturer, without the need to consider the efficacy (i.e., conversion of J of electricity into µmol of photons of PAR) of a given lighting technology. In other words, for a given lighting technology, a 15 per cent reduction in lighting capacity equates to an equivalent reduction in energy use. While this was a beta-test of an early prototype, this trial clearly demonstrated the potential for intelligently-controlled LED systems which manage light output on an ongoing basis in real time, to maintain or even increase productivity while simultaneously reducing energy use.

Note on fixture efficacy
Energy efficiency is a commonly-touted advantage that LED technologies have over HPS. However, these waters have been made somewhat murky due to the lack of standards as to how energy efficiency is measured and reported. Efficacy is the concept that relates the output of electromagnetic radiation (i.e., “light”) to the input of electrical energy. For horticultural applications, we (usually) measure light output as photosynthetic photon flux (µmol·s-1) in the 400 to 700 nm range and electrical energy as power (W or J·s-1). Note that both of these units have time components which should cancel when made into a ratio. Therefore, the units for efficacy should be micromoles of photons per joule of energy (µmol·J-1). However, many ambiguities and mash-ups of these units exist in the industry; creating confusion. Some things to note when considering fixture efficacy:

We are truly at the tip of the iceberg with our understanding of how light can be leveraged to improve production of various commodities, within both greenhouse and indoor production scenarios. We will be engaged in lighting research for years to come. We will keep you updated on our research projects as well as the development of LED technologies for horticulture applications from time to time. Stay tuned for part two of this article in the next issue of Greenhouse Canada, where we’ll explore the other advantage of LED dimming: adjustable spectra.

Disclaimer: The purpose of this article is to provide objective information to the end users of greenhouse lighting technologies. Several horticultural LED manufacturers/vendors and their various technologies are mentioned throughout this article as exemplars. Specific brands or technologies cited should not be construed as either endorsement or criticism.

Dave Llewellyn (dllewell@uoguelph.ca) is a research associate in Dr. Zheng’s lab who has extensive experience working with lighting technologies in research and production environments. This lab has focused on lighting in high-value crops (e.g., cannabis, microgreens and ornamentals) for many years. Dr. Youbin Zheng (yzheng@uoguelph.ca) is an associate professor at the University of Guelph.