The science of retail - Consumer psychology may be key to improving sales. 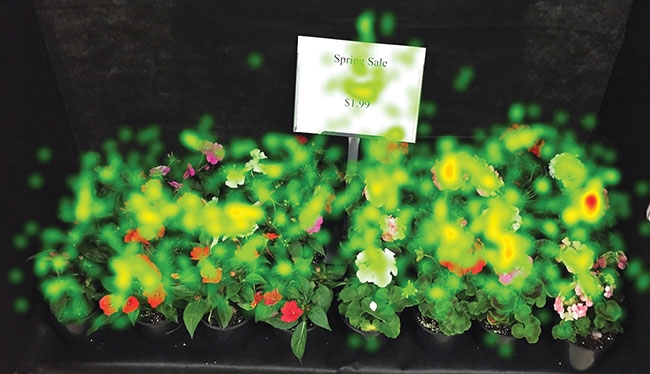 The longer someone interacts with plant material, the more likely they are to spend money, says Dr. Bridget Behe, professor of horticulture at Michigan State University. But she’s not talking hours or minutes – they’re mere seconds.

This is why there are classes, planting parties, wine and chocolate events, explains Behe, while speaking at the Green Industry Show in Edmonton last year. It’s capitalizing on the social nature of people while keeping them in the retail space, she says. In the US, over 80 per cent of the purchase decision is made at retail.

To better understand what draws – and keeps – consumer attention, Behe’s research group conducted over a dozen eye-tracking experiments using specialized glasses. Two cameras were positioned over each eye in the glasses, allowing Behe to tell what someone was looking at to the accuracy of her thumbnail.

In one study, participants were presented with several randomized displays, each containing either 6, 12 or 24 plants. As the number of plants went up, the percentage of plants viewed went down from 87 per cent to 46 per cent – that’s less than half the plants. “If you don’t see it, you can’t buy it,” says Behe.

What about the location of the product? Their research showed that people were more likely to buy from the right side of the display than the left, which makes sense since most North Americans are right-handed. Consumers were also more likely to buy from the front of the display (47 per cent) versus the middle (31 per cent) and last (22 per cent) rows. “They don’t even see three or four rows back,” says Behe. That front row has got to be really stellar.

Height is also a key factor. Behe’s research group looked at the effects of having a three-tiered display. Most bought from the top shelf, middle shelf came in second, and the bottom shelf was dead last.

What about the number of genera or species? Testing out displays with one, two, three or four genera, Behe’s group didn’t find a big difference in the percentage of plant views. While customers were more likely to buy from the integrated display, they weren’t looking at 80 per cent of the plant material. Customers found what they wanted, and they made the purchase. “So this tells me, we’re going to max out at a number of plants that people cognitively can handle,” says Behe. “We’ve got to simplify these displays.”

Signage is another important element and placement matters. “They found the high to medium prices on the left faster than moderate prices on the right,” says Behe, likely because nearly all North Americans read from left to right. So where should prices we placed? Buried on the right, she says, buying just a few more seconds to interact with the merchandise, especially when things are at a very high price point.

Acknowledgements: Funding for this research was provided by grants from the Horticultural Research Institute and the USDA Federal-State Marketing Improvement Program.