2021 is bursting forth with higher greenhouse plant sales than in 2020, but should growers prepare for a return to more normal levels of demand in 2022? 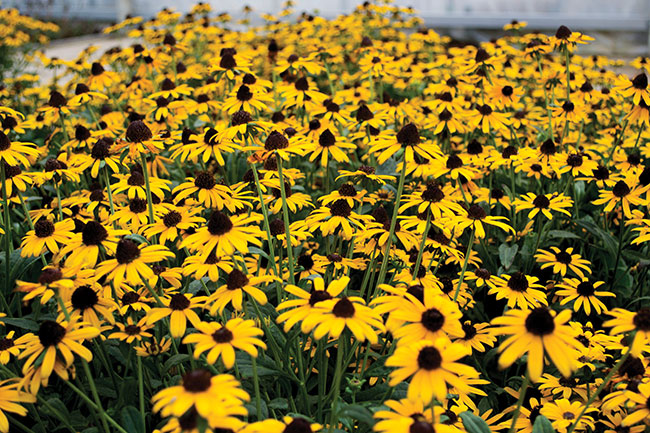 Consumers have been searching for plants that will attract birds, bees and butterflies to their gardens, such as this black-eyed Susan from the Sheridan Garden Classics Native Roots Collection. Photo credit: Sheridan Nurseries

In retrospect, the boom in landscaping and gardening across the developed world during the pandemic should not have been a surprise.

People had to, were encouraged to, or chose to spend most of their time at home in 2020. Once spring arrived, Canadians used their time to beautify their outdoor spaces. Trees, shrubs, flowering perennials, annuals, vegetables – you name it, people were buying it.

But it’s likely that this year saw more garden centre sales than in 2020. Brian Minter, a horticultural writer and broadcaster in B.C., reports that shortages have been widespread at garden centres in his province for many plants such as rhododendrons, azaleas and the ever-popular daphne ‘Eternal Fragrance.’ He says it’s also very hard in B.C. to find the many new compact flowering shrubs by Proven Winners, such as the ‘Bloomerang’ lilac that flowers all summer long and the new compact buddleias.

Minter adds that the unusual cold spell in Texas in early 2021 “has added enormously to the shortages of many annuals like geraniums, calibrachoas and specialty plants. Millions of plants were frozen and greenhouse growers are still suffering from not receiving their normal amounts of cuttings. Soils, seeds and containers are also in short supply.”

In this second year of the pandemic gardening boom, experts report that food gardening has reached a whole new level.

Ben Cullen has been particularly impressed with the sophistication of vegetable gardening on display this year. “We’re not seeing people buying a few tomato plants and sticking them in and hoping for the best, but a high level of food gardening infrastructure,” reports Cullen, who, along with his father Mark Cullen, is a well-known gardening industry author and expert. “There are vertical setups, sophisticated integration of food gardening with ornamental gardening, season extension with cold frames. And these gardeners are interested in the basic vegetables, but also exotic varieties and heirlooms. It’s been amazing to see people going for it.” Cullen also notes a growing movement to create food gardens in the front yards of Toronto, supported by initiatives such as ‘Food Up Front.’

At Sheridan Nurseries in Georgetown, Ont., Director of Marketing Victoria Mulvale notes that extremely high demand started over the winter of 2020/2021 for vegetable seeds, seed propagation tools and seedlings to grow indoors. This has continued right through the spring planting season. 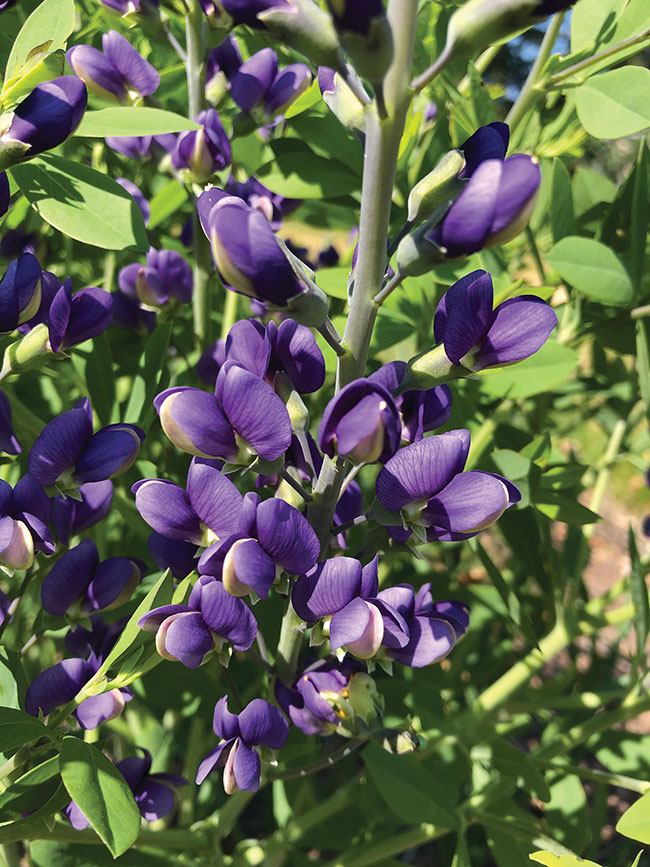 This Baptisia ‘Blueberry Sundae’ is one example of new native plants that have been introduced in recent years. Photo credit: J. Peter,

Interest in native plants, as well as those that aren’t native but otherwise support natural ecology, has been strong for years in Canada, but it’s still growing.

“Beauty is still the main motivator for our customers,” notes Landscape Ontario Executive Director, Tony DiGiovanni, “however, there is a strong move to use landscaping as a solution for flooding and climate change. Native plants and fusion gardens continue to increase.”

Jon Peter, curator and plant records manager at the Royal Botanical Gardens in Burlington and Hamilton, Ont., notes that gardeners are picking up on the ‘Doug Tallamy approach’ of replacing lawn with a diversity of mostly native, woody and herbaceous plants to support pollinators, native food webs and local watersheds. He also observes that many new cultivars of native plants have been introduced in recent years. “Just look at how many different flower colours are available for Baptisia,” he says. Baptisia is also known as false or wild indigo and features stunning tall flowering spires.

Peter adds that there are now a wide variety of drought-tolerant plants suited to gravel gardens and xeric gardens where little or no watering is needed, and therefore put minimal strain on local water sources. These include ornamental grasses like native switchgrass (Panicum virgatum) that now come in an array of leaf and flower colours as well as textures.

This year, Sheridan Nurseries launched an email and social media campaign on using different plants to attract beneficial bugs and to keep away pests. It’s had some of the highest levels of engagement rates the company has ever seen.

Back in B.C., Minter reports that demand for annuals is high across the board for all colours and varieties. “Interest in impatiens had been dropping off in recent years, but it’s back because of the mildew resistance offered by the ‘Beacon’ and ‘Imara’ varieties,” he says. “The superstars right now are the SunPatiens varieties that can withstand the hot sun.”

He adds that their whole cuphea line is popular, especially a Proven Winners variety called ‘Vermillionaire’ which he calls “an absolute magnet with hummingbirds.”

At Sheridan, demand for beech trees is off the charts, growing ever higher each year since 2018. Japanese Maples are also hot commodities, as are hardy roses. “[Since] March, the demand for roses has been very high,” reports Mulvale. “Normally rose sales don’t pick up until they start to come into bloom to show off what you’re getting, but this year, guests have been buying them before they even have buds.”

Minter reports big love for roses in B.C. as well, along with desire for colourful, compact shrubs like hydrangeas and azaleas. People are also looking for any tall, thin trees such as the sweet gum tree, Liquidambar ‘Slender Silhouette.’ And while sales of fruit trees have dipped slightly in B.C., likely because so many were purchased last year, sales of fruit bushes like blueberries are extremely high.

Perennials remain in high demand, such as this magnus coneflower.

Blueberry bush are examples of perennial choices that not only look beautiful, but serve a purpose. Photo credit: Sheridan Nurseries

As with many other types of plants, shrubs and trees this year, “people are going in every direction” with perennials, says Cullen.

Minter highlights the highest demands for anything that’s compact, has a longer flowering period or has a fragrance. “Lavender of any type is a superstar,” he adds. “People also want old-fashioned bleeding hearts and foxgloves. Shade perennials are also very popular. Brunnera, with its large, speckled, silver foliage and silver flowers, is one of so many new, visually-interesting varieties. Hardy fuchsias are popular, and so are the many colourful varieties of heucheras which blend extremely well with most other plants in containers.”

Tropicals remain a gardening darling in 2021. “The Millennials do so much online research and they want the new and unusual offerings,” Minter reports. “Price is no object. The fiddle leaf fig is popular, as are monsteras, Boston ferns and succulents such as ‘String of Hearts’ and ‘String of Dolphins.’ Folks see them online, and they want them.”

Gardeners are also self-educating about tropicals online, adds Cullen, and significantly more gardeners are overwintering these plants, wanting to keep them for many years. Mulvale says this concept – getting emotional benefit and enjoyment from caring for plants over the long term – has been strongly promoted online by social media influencers. “Demand is outpacing supply as the ‘plant parent’ lifestyle continues to take hold and younger audiences become more engaged,” she says. “Tropicals make great social media subjects – they are very photogenic and create shareable content which helps drive interest with new audiences. We recently brought in a Ficus triangularis which is starting to cause chatter on social media as this plant is hard to find.”

Minter also points to the extreme popularity of the ‘Black Raven’ ZZ plant. If garden centres can source any, he says, these plants will be gone by the following day. “People also love the many different colours of calathea,” he says. “Citrus trees, especially lemons which are greatly valued for their fragrance, are in high demand.”

Peter adds that although they are not tropical, there are numerous new swamp rose-mallow hybrids now on the market that feature large tropical-looking foliage and dinner-plate sized flowers. “We are experimenting with some new introductions in the SUMMERIFIC Series,” he reports, “like ‘Candy Crush’ and ‘Evening Rose.’” 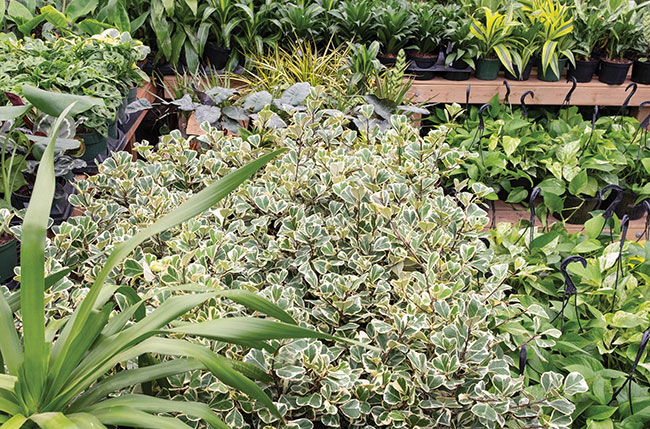 While no one has a crystal ball, Minter believes that by late summer or early fall, a return to normal demand at gardening centres is in the cards. He urges retailers to keep in mind that as the pandemic winds down, people will no longer be confined to their homes. Those who have forayed into gardening, or have intensified their interest in it, have already purchased so much in 2020 and 2021. They may choose to focus more attention on the many other activities in which they could not participate for so long. “It will be interesting,” he says, “to see how the rest of 2021 and 2022 unfolds in terms of gardening participation.”

For his part, Cullen is optimistic that interest in gardening will remain high. “I think there’s a temptation for ‘boom and bust’ thinking, but I think demand will continue to be strong,” he says. “People are always changing things and now that they’ve gotten really interested in gardening, even some of them making the effort to take out some lawn, I think you’ll see the interest continue.”

Treena Hein is a freelance writer based out of Ontario.


Related
2020: The year of the garden
Garden centres find new ways to retail and engage
Growers come out ahead in tumultuous times
Plans to move forward with COVID