Features Flowers Retail Trends
2020: The year of the garden

Garden centres – and their suppliers – are doing stiff business this year. From tropicals to edible ornaments, here's what's been selling exceptionally well. 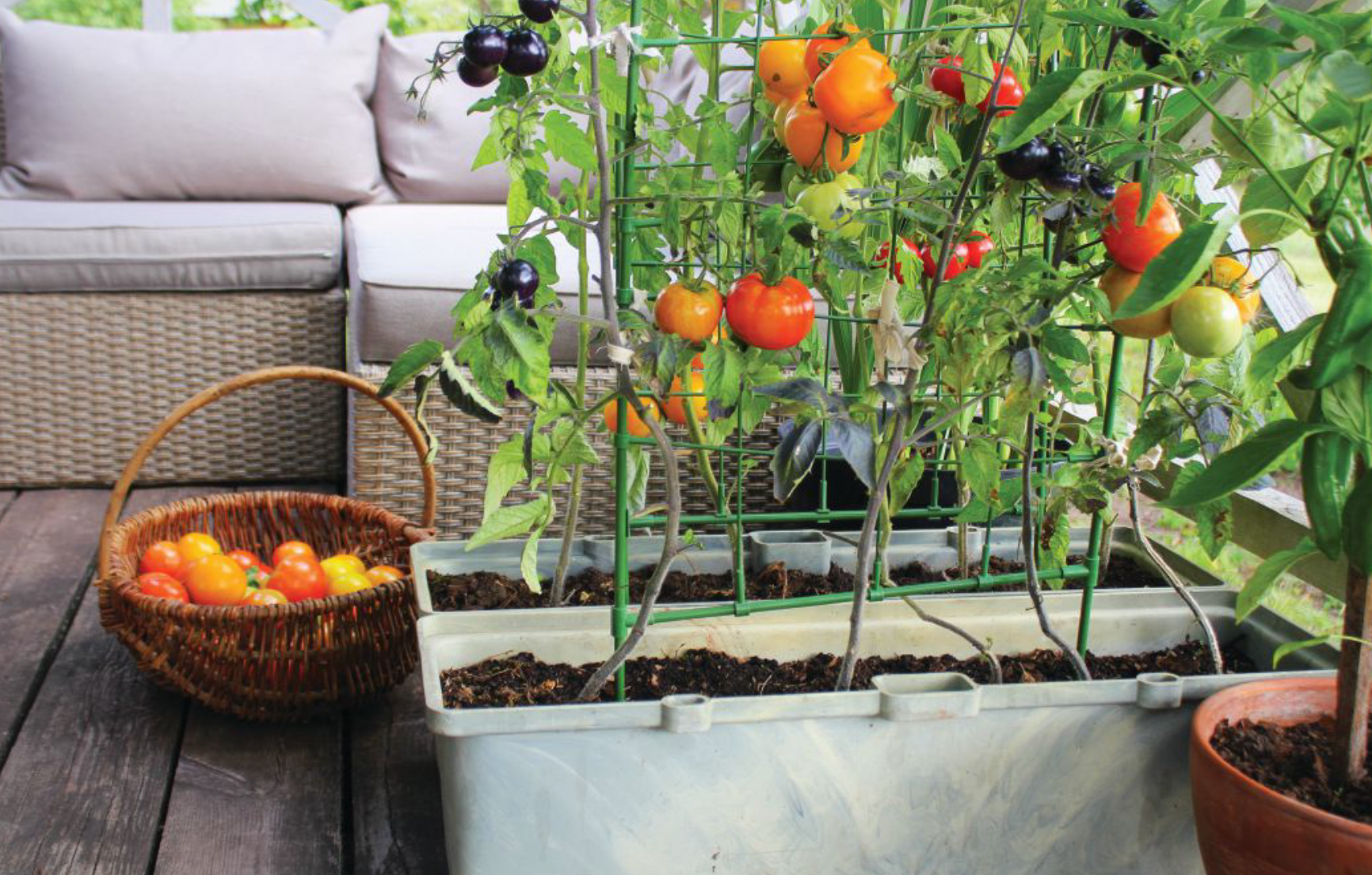 COVID-19 has affected, and continues to affect, many aspects of life this year, but one of the positives is an enormous interest in home gardening. The need to stay at home during this pandemic, along with the corresponding boredom, isolation and anxiety, has resulted in “outstanding and fast-paced changes” in the Canadian gardening market this spring, according to Mark Cullen, head of Home Hardware’s gardening division and owner of brand ‘Mark’s Choice’ with son Ben Cullen.

And what could be better than planting and growing fresh vegetables, herbs and berry bushes, especially with children at home and particularly when in March and April, there were fears over possible food shortages? Indeed, Ben says the incredible interest in vegetable gardening this year is being compared to the Victory Garden movement of World War II, where everyone was encouraged to grow as much food for themselves as possible.

“2020 will go down as ‘The Year of Fruits and Vegetables,’” says Sue Baker, vice president of merchandising and marketing at Georgetown, Ont.-based Sheridan Nurseries. She reported in late May that “whether it’s seeds, bulbs or potted, we can’t keep the product in stock. Potted product is selling as fast as we can receive it from our growers.” Selling exceptionally well at Sheridan Nurseries is their line of ‘Trellis Bowl’ vegetable planters – beans, peas, cucumbers and more – due to their ease of care. “Just bring it home,” says Baker, “water, fertilize and enjoy your vegetables.” This situation is exactly what Alberta Horticultural Association president Robert Spencer expects this year, that ready-made vegetable plant containers will be very popular “as some people just don’t have space for a traditional garden but want something edible.”

“Edible plants can be beautiful too,” adds Jon Peter, curator and manager of plant records at the Royal Botanical Gardens in Burlington, Ont. Peter says homeowners are beginning to incorporate tomatoes, blueberries, leeks and parsley and more into their yards, and in terms of trees, choosing plum, pear, apple and sweet cherry instead of ornamental cherries or flowering crabapples, which not only give beautiful spring flowers but also edible fruits. By May of this year, Sheridan Nurseries had sold more of its blackberry, raspberry and blueberry bushes than in all of 2019. Fruit trees are also selling very well, with demand for cherry trees and dwarf trees the strongest. 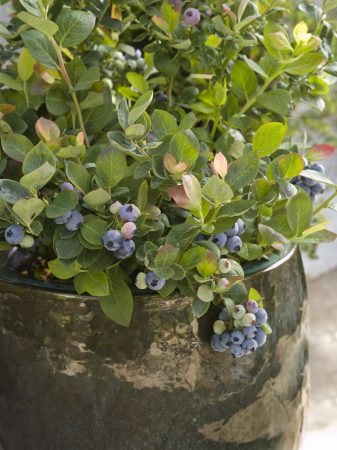 Edible and small fruit bushes and trees have been very popular. Photo credit: Bushel and Berry

As the years go by and trees age, demand will increase for plants that do well in the shade they cast, notes Mark Cullen. Gardeners who have shady areas may reach for more ferns this year, says Ben, as many ferns on the market are native species and come, “like hostas, in a wide range of colours, textures and sizes.”

Planting native species has never been more popular. Peter reports that today’s gardeners are increasingly using the ‘Doug Tallamy approach’ to replace lawn with a diversity of native plants. He also says gardeners are discovering the many durable and adaptable native sedges now available for shady areas and more. “If you have dry shade, plant Carex rosea,” he suggests. “If you want something evergreen, plant Carex plantaginea and if you have a wet ditch, plant Carex squarrosa.”

Strong demand for tropical plants also continues into 2020, with some consumers bringing them in during the winter and others buying them new each year. In Ben Cullen’s view, tropical indoor plants have been the ‘gateway to gardening’ for a generation of young people who live in condos and are inspired by images they see online. “As these people graduate into their first homes and gardens, they will no doubt keep their tropicals with them,” he says.

In addition, Peter says succulents, both winter-hardy and interior, are still highly-desirable this year for small spaces such as patios, balconies, containers and windowsills. By May, Sheridan Nurseries had sold more than four times their usual amount of succulents. “They require less time and effort than many plants and come in a variety of colours, textures, shapes and flowering types,” Peter explains. Furthermore, many succulents remain small in size, which people like, and they are also generally easy to propagate, making them easy for gardeners to share. 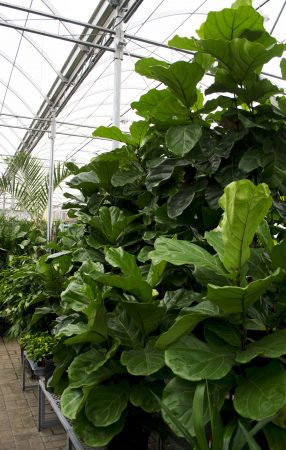 Ornamental grasses also continue to be popular in 2020. They “tick a lot of boxes,” says Mark Cullen, in the way they provide great value through their tolerance to insects, diseases and more. “With climate change, we see more rain, less often,” adds Ben. “Ornamental grasses are a secret weapon for dealing with wild weather – they absorb a lot of water during storms, preventing erosion and flooding, and hold up well during droughts.”

Peter adds that gardeners are trying out ornamental onions for their late spring/early summer blooms from bulbs planted in the fall. Some are taller with flower heads the size of softballs, such as the Allium ‘Gladiator’ while others have shorter stature, such as Allium ‘Ostara’. He recommends them not only because they look great, but they also release compounds into the soil which can help deter pests.

There are also edible ornamentals, says Peter, that can be incorporated into a meal. For example, the fresh flowers of redbud (Cercis canadensis) can go into a salad, the fruit of Kousa dogwood (Cornus kousa) or Cornelian-cherry (Cornus mas) in a dessert, or the fresh growth of Hosta or the fiddleheads of ferns in a stir-fry. “These plants,” he says, “can provide beauty at one time of year and provide fresh food at another.” 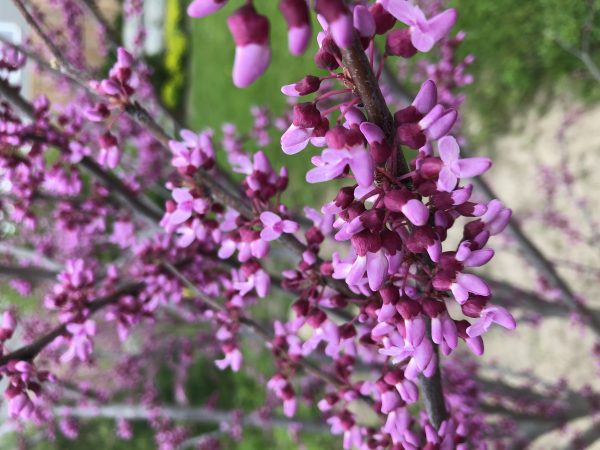 Edible ornamentals can be incorporated into a meal, such as the fresh flowers of redbud (Cercis canadensis). Photo credit: J. Peter, RBG

THE OLD STANDBYS: ANNUALS AND PERENNIALS

It’s not surprising that in this year filled with public anxiety and boredom due to the pandemic, consumers are looking for bright and cheery colours.

Baker reports that blooms in ‘Hot Pink’ and ‘Living Coral’ are selling out first, and that colourful standbys like Mandevilla, Bougainvillea and lavender are all selling above expectations. On the traditional perennial front, Peter notes that there are now many new perennial geraniums that bloom longer and come in new colours. He recommends that gardeners check out cultivars ‘Jolly Jewel,’ ‘New Hampshire Purple’ and ‘Tiny Monster.’ 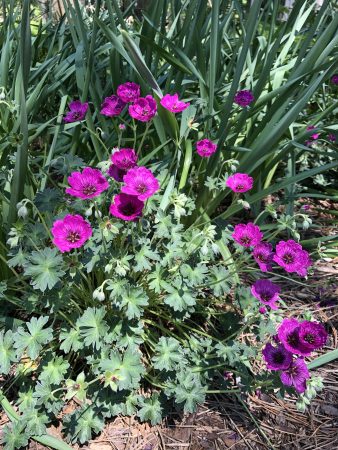 In reflecting on this extraordinary year in gardening and otherwise, Tony DiGiovanni no doubt echoes the sentiments of all greenhouse garden plant suppliers and retailers across Canada: hopeful but cautious. The executive director at Landscape Ontario notes that while COVID-19 has stimulated great interest in gardening in 2020, “let’s hope the interest remains. It is up to us as professionals to help the public be successful.”