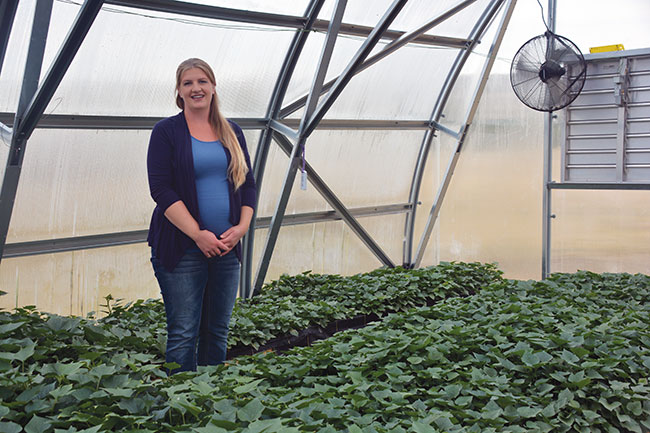 Doing something different to diversify ranch income in semi-arid southeast Alberta could be challenging.

Stephanie Lessner, a young mom with ambition, energy, and little ones at home, took on the challenge full-time in 2021 and had a good year. Finding success will take two more years, at least, but she may be sprouting a sweet potato niche (or industry) for western Canada.

Lessner, along with her husband, parents, two brothers, and their spouses, lives on short-grass Prairie along the Red Deer River near the hamlet of Jenner. The four-family J G Larson Livestock ranch has about 1,000 cow-calf pairs, 9,000 acres of crops and pasture, and a pair of farm-owned natural gas wells. It’s about 100 km to the nearest commercial greenhouse.

“We have been looking to diversify without increasing the land base or the farm operation for a few years,” Lessner says.

They had settled on building a small greenhouse heated with their natural gas in cold weather. Inside, they wanted a new-to-Alberta crop that would have good market potential.

Stephanie already had a management diploma from Lethbridge College. For the Fall semester, 2020, she signed on for a horticulture certificate course through Olds College “so we’d have a little information” about operating a greenhouse.

About that time, she learned that Vineland Research and Innovation Centre (Vineland) in Ontario was looking for entrepreneurs who would try greenhouse production of sweet potato slips.

“The thing that got us started was the slip production. They need to be propagated in a greenhouse but then they utilize the farmland as well,” she says.

Alberta already has a well-established commercial potato industry about 150 km south of Jenner. The industry has three processors. A processor could, in theory, shut down one production line for a few weeks to process sweet potatoes – if an industrial supply became available.

In February 2021, the family pitched in to build a simple 24×26-foot polycarbonate, half-circle, greenhouse on the ranch.

“We don’t need high technology. It does have high-pressure sodium lights, a louvre, a fan, a little water pump, and a furnace. For water, we fill a 1,000-litre tote because our water is not very good here,” she says.

With a production manual in hand from Vineland and hotline connections to Vineland as well as the Alberta Greenhouse Growers Association consultant, Lessner began her efforts to launch a sweet potato industry for Alberta and British Columbia. 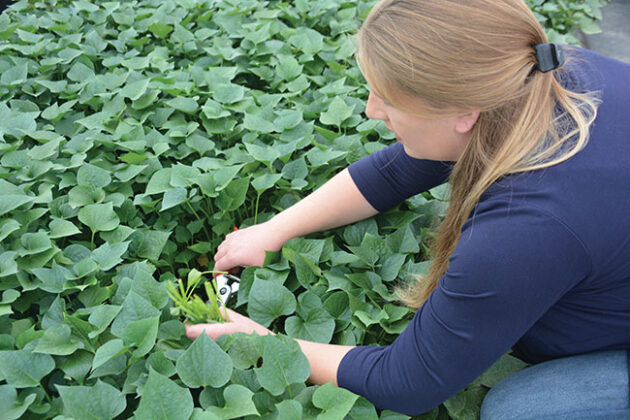 The production manual for best practices, Sweet Potato Slip Production in Canadian Greenhouses, rolled off the press in early 2020.

The publication culminated about eight years of research and development funded by the Ontario Ministry of Agriculture, Food and Rural Affairs, the University of Guelph and Agriculture and Agri-food Canada, and was led by Vineland research scientist and vegetable breeder Valerio Primomo.

It was about a new variety, and an idea intended to spawn a new horticultural industry in Canada.

Amanda Moen, Vineland’s business development advisor, explains how Vineland started developing a short-season sweet potato for Canada’s climate in 2012. The crop was being ‘discovered’ as a healthy alternative food on a global basis. Sweet potato already was popular among new Asian immigrants, but Canada was importing at least 70 percent of what it consumed.

At the time, Canada had about 1,500 acres of sweet potato production in southern Ontario and Quebec plus a handful of growers in Nova Scotia’s Annapolis Valley, BC Lower Mainland, and on Vancouver Island. However, the Canadian crop would always be ‘sold out’ right after harvest.

Canada’s first short-season sweet potato, Radiance (VSP001), was launched in 2018. It is about three weeks earlier to maturity than the competition.

“This variety is going to open the door to increasing cultivation because it de-risks production,” Moen says. The project aims to increase cultivation by building a network of producers.

“Access to quality slips coast to coast will make a big difference. With the combination of an early, high-yielding variety and availability of quality slips for it, we expect a huge increase in acreage.”

For the next step, Vineland needed a network of one or two licensed slip producers in each region of Canada. Qualified slip producers need a simple greenhouse, equipment, and land for field multiplication.

Today, Canada has established a network of six slip producers with the ability to serve Canadian growers coast-to-coast. Hope is in the air at Ontario’s Vineland Research and Innovation Centre. Their idea may be taking root.

For Lessner, their new venture began soon after the little greenhouse was ready. To grow slips, Canadian propagators use a greenhouse to bed seed potatoes or small in-vitro plantlets in potting soil and harvest the vines as they emerge.

Lessner and family laid seed potato down in the greenhouse on an inch of media or soil, and put another inch or two of soil on top, then added heat and water. By the end of March, roughly 6,000 Radiance sweet potato slips half-filled the little greenhouse.

“They like heat and moisture and grow very quickly. We were taking cuttings from the slips from late March through the middle of April,” she says.

The first 6,300 cuttings filled the other half of the greenhouse. They did a second cutting in May, sending those slips (about 9,000) by express shipping to buyers. At that stage, the sweet potato slips are unrooted vegetative cuttings. They are about 6 to 12 inches tall and ready for planting when delivered.

Meanwhile, in a nearby field, the Larson family built a specialized acre of raised, black mulch beds irrigated by drip lines. They ended up with nine rows of beds spaced at 36” between beds. Each bed had two rows of sweet potatoes on 12” spacing. Altogether, they planted 15,000 slips in the beds in mid-June.

The first field season turned out well, under the circumstances. Deer never jumped the fence and pests they expected didn’t arrive. The late planting was complemented by a long, open fall that enabled their first sweet potatoes to bulk up and mature. They harvested in mid-October.

Some tubers grew out farther than expected and were damaged by the digger before it was modified. Surprised livestock enjoyed the damaged sweet potatoes.

“We had a few more damaged than I wanted to see, but after being in grocery stores this fall, I think everybody had a hard time with sweet potatoes. We had set a very high standard on how they had to appear, and in retrospect, we would have been able to market most of the culls,” she says. 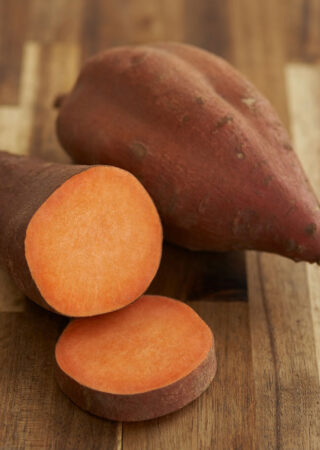 In February 2022, the small greenhouse was already bedded with sweet potatoes to supply retail greenhouses and garden centres with slips early in their season. A second greenhouse, 4.5 times larger, was being erected for commercial growers wanting slips in 2022.

“This expansion allows us to serve more commercial growers and be open for orders from greenhouse and garden centres,” she says.

The balance of their first sweet potato crop was in temperature-controlled storage in a reefer trailer. In early March 2022, it was to be bedded in the expanded greenhouse space to start a second cycle in western Canada.

Down the road, if all goes well, Lessner will need upgrades to the greenhouse, processor support for the new industry, and a major investment in specialized storage similar to potato industry sheds.

Lessner points to a few challenges ahead.

For one, there is competition from American slip producers. “They grow the slips outside in fields for less than our greenhouse expense,” she says. But her low-cost shipping offsets that.

On the positive side, she adds, there is every reason to see a good market outlook.

“I believe there’s a lot of demand. We had a lot of inquiries we couldn’t fill. We shipped some slips to Ontario, but most went to Alberta and British Columbia. We had inquiries from Saskatchewan and Manitoba as well. If there is enough heat, and if we don’t get an early frost, the sweet potato will grow very well here.”

Sweet potatoes are native to the tropics and are a member of the morning glory family. According to the FAO, with approximately 147,500 acres of sweet potatoes and 1,450,000 tons of production in 2019, the United States ranked 9th in the world. The USDA records that, the same year, North Carolina planted 98,000 acres, followed by Mississippi (28,000 acres) and California (21,500 acres).

“There’s a lot of interest and the crop is in demand,” says Moen. “Lessner, for example, stands out because she is making high-quality slips accessible in a region that was unable to receive them in the past. If she can scale up to a million-plus slips a year over the next few years, it’s going to make a big impact in sweet potato becoming a common root vegetable crop in western Canada.”

Based on what they know today, if the network scales up to planned capacity, it would be able to meet today’s sweet potato demand in Canada.

“We now have licensed producers in Alberta, Manitoba, Ontario, Quebec, and Prince Edward Island. And, we have a North Carolina farm that does field planting for slips. The people are in place, now they must scale up their stock and build their confidence,” Moen adds.