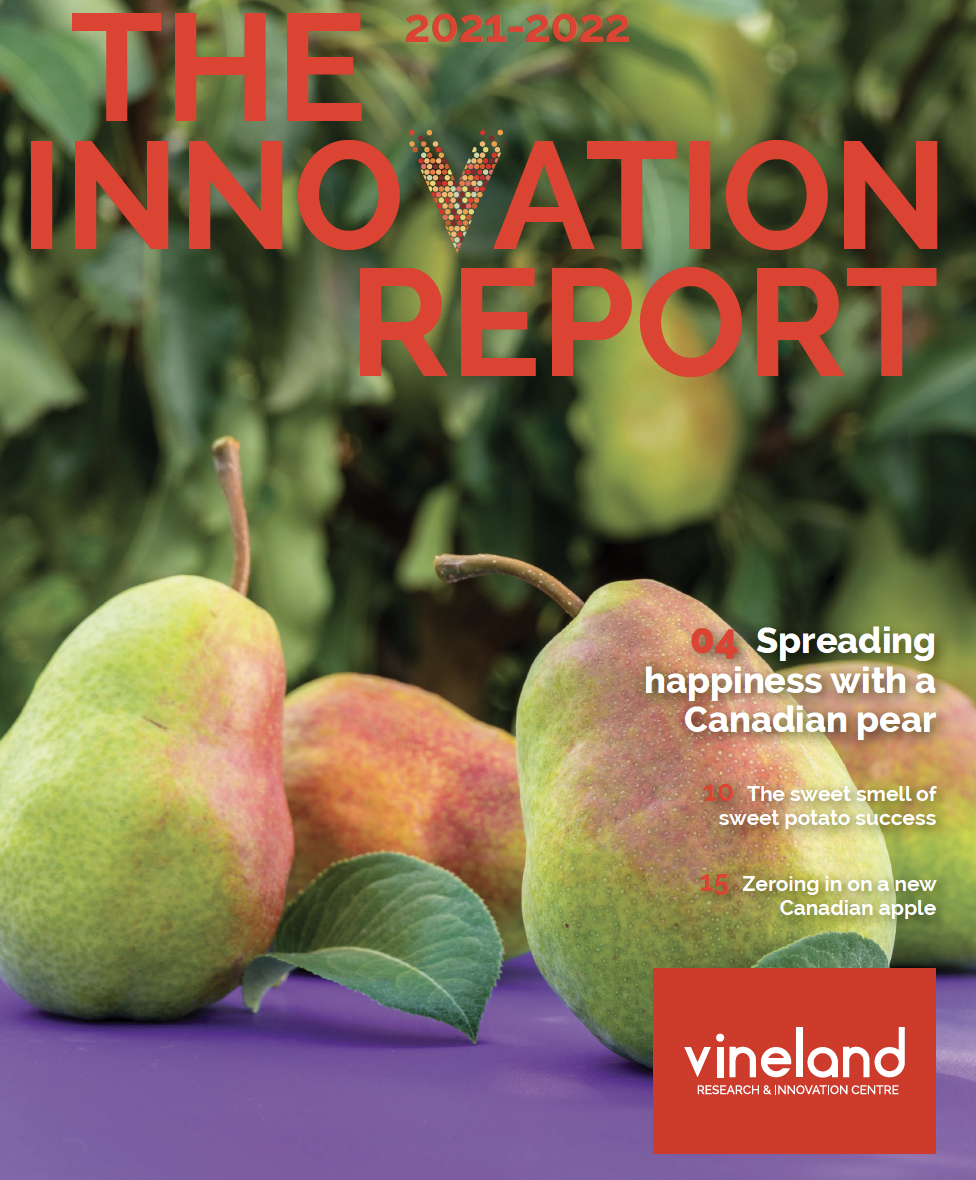 In its 2021-2022 Innovation Research, the research institution sums up the results of key projects, including new greenhouse predators, bred-in-Canada tomatoes and sweet potatoes.

“With the reimagining of Vineland in 2007, we continue the more than a century-long task of improving the economic viability, sustainability and competitiveness of horticulture in Canada,” says President and CEO, Ian Potter.

Greenhouse grown vegetables and flowers are susceptible to pests which can damage crops anywhere from five to 20 per cent, or even up to a total devastation of the harvest if the insect transmits a plant virus. That is why Vineland’s Rose Buitenhuis PhD, Biological Crop Protection is leading a study of three native Canadian predators.

“Our overall goal is to find new native-to-Canada predators that are generalists and will be a good addition to an Integrated Pest Management (IPM) program in horticulture,” says Buitenhuis.

Collaborating with Applied Bio-nomics Ltd. of British Columbia, Buitenhuis is testing three nabid predator species found in the Niagara region of Ontario with an aim to determine which one is best suited to control pests in greenhouse crops. The three species are tested for their predation rate, which common greenhouse pests they feed on, how well they survive on supplemental food and how well they perform in an IPM system with multiple pests.

Buitenhuis says all of the candidates are behaving in a similar way, but she hopes to pick the best of the three. As the research only involves indigenous predators, so no other regulatory approvals are needed. The hope is that growers will see an immediate impact by March 2023 when a biocontrol package is rolled out.

Vineland and Applied Bio-nomics have also collaborated to introduce predatory mite, Anystis, to the market. First discovered in the St. Catharines region of Ontario, the mite was tested on cannabis plants at Niagara College’s Agriculture & Environmental Technologies Innovation Centre.

Vineland’s research has put the spotlight on the genes responsible for different flavours in greenhouse tomatoes.

Collaborating with scientists from Université Laval and the University of Florida, Vineland has identified over 100 flavour-related tomato gene variants which can be used by tomato breeding programs across the globe to create tastier greenhouse-grown varieties.

More than 20 of those gene variants impact aroma and six contribute to specific flavours.

The patented DVS technology can identify tomato lines with distinct genes which influence aroma. Vineland grew and evaluated plants from a shortlist provided by spin-off company Platform Genetics Inc. and compared them to more common or wild-type varieties.

The result of the sensory studies identified at least six different lines with altered chemistry which were actually perceived by the sensory panelists as having different flavours,” says Amy Bowen, PhD. Program Leader, Consumer Insights.

Vineland will use sensory results from consumer studies to breed new flavour-differentiated tomato hybrids to its Canadian adapted tomato-on-the-vine (TOV) program in partnership with Eminent Seeds.

Vineland has adapted a new Canadian-friendly sweet potato variety to satisfy the country’s love for the vegetable.

Radiance was commercially launched in 2019 and has been steadily increasing its production to displace imported products.

According to Vineland’s report, Canada consumes approximately 1.3kg per person of the tuber every year and was the third largest importer of the vegetable behind the UK and The Netherlands in 2020.

Most of Canada’s sweet potato production is concentrated in Norfolk County, Ontario. According to Vineland, the most popular variety, Covington, struggles to thrive in the cooler shorter growing season of Canada due to its native North Carolinian origins. And so, Vineland launched a sweet potato breeding program in 2012 to meet the need for high-yielding sweet potato varieties to be adapted to the Canadian growing conditions.

Radiance was borne from the collaboration between Vineland and Louisiana State University. With its red skin and deep orange flesh, the Canadian-bred vegetable has higher yields, matures earlier than the Covington and Orleans varieties and stores well.

According to their research, the bright orange flesh is a hit with the Canadian consumer and together with its firm texture and sweet caramel-like flavour scored highly with Vineland’s trained sensory panel.

To establish a sustainable supply-chain, Vineland is pursuing licensing agreements with slip producers to develop a Canadian supply chain for Radiance . The advantage of home-grown sweet potato slips means there is less chance of slip deterioration due to shipping and border crossing delays from the southern United States. Currently, Vineland has five Canadian and one U.S. slip producer. The company hopes to build a network across the country to help fill the estimated demand of 165 million slips per year.

Canada has expanded production of Radiance from 10 acres in 2019 to 70 acres in 2021. It is hoped that production will reach 1,000 acres by 2023. This will satisfy consumer demand and offset imports. Vineland’s made-for-Canada sweet potato varieties could generate $25,000 per acre which would hugely impact the Canadian vegetable industry.

Aside from Canada, other cool climate countries in northern Europe are interested in adding sweet potatoes to their crop cycles. To address this opportunity, Vineland has signed an agreement with Volmary GmbH, a plant breeding and distribution business in Germany to distribute Vineland sweet potato varieties in Europe.

With files from: Vineland