“Coffee pitcher time,” Clazina Meyers (Oma) announces over the intercom
at Meyers Fruit Farms and Greenhouses in Niagara-on-the-Lake day of my
recent visit. Yes, Oma, at age 79, still prepares the coffee for
breaktimes and does the banking. Her husband Jim, equally youthful at
age 81, remains active in the day-to-day operations of the business. 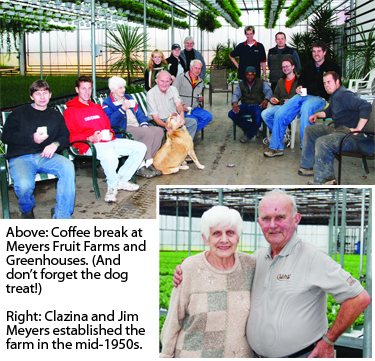 “Coffee pitcher time,” Clazina Meyers (Oma) announces over the intercom at Meyers Fruit Farms and Greenhouses in Niagara-on-the-Lake day of my recent visit. Yes, Oma, at age 79, still prepares the coffee for breaktimes and does the banking. Her husband Jim, equally youthful at age 81, remains active in the day-to-day operations of the business.

Jim and Clazina started Meyers Fruit Farms and Greenhouses in the mid-1950s, and remain involved in this successful family business today.

Jim was borne in Veere, a small community in the province of Zeeland in the Netherlands. He studied agriculture before serving in the Dutch army, and later gained experience at the government experimental farm for fruit and vegetables.

I’ve known Jim since 1987, and more closely since 1992 when I started working with his company in a consulting capacity.

His agricultural education and work experience in the Netherlands provided a firm foundation for his subsequent venture to fulfil his bigger dreams, when he emigrated to Canada. It was in 1951 that Jim and Clazina, who had then only been married for three weeks, went on a honeymoon cruise across ‘the pond’ to Canada to start their new life together in a new country.

He began by picking fruit and pruning grape vines, and also worked at the dry dock on the Welland Canal in St. Catharines.

Opportunity soon came knocking when Jim met a local fruit farmer. Their friendship soon developed into a business relationship. In 1955, Jim purchased the farm, which included a home on the property, for $40,000, with only a $1,000 down payment and a loan with an interest rate of six per cent.

Things weren’t entirely rosy those early years. The weather was less than optimal for their fruit trees, and the income was less than they expected. However, they remained determined and Jim augmented the farm’s income by working with landscapers and in greenhouses. Their patience was rewarded, as it wasn’t long before the farm was turned into a profitable operation!

In 1967, the fruit farm focus was expanded with the construction of a greenhouse. This was used for tomato and cucumber crops that were grown on straw bales with dirt on top. However, after two years, they switched production over to growing geraniums in the spring and mums for Easter and Mother’s Day. They sold their flowers to Lakeshore, a wholesale broker.

All four of their children began helping out with the farm from a very early age. By age 18, Fred showed interest in farming, and an additional 50 acres of orchards were acquired. After he completed horticulture studies at the University of Guelph, another acre of plastic greenhouse was built. This marked the start of poinsettia production. In 1980, Easter lilies were added to their crop rotation. They began with 30,000 lilies, and have since expanded to 170,000 lilies.

In 1986, a 20,000-square-foot glass structure was added. After about 10 years of restructuring and solidifying their production and marketing systems, expansions continued at a quicker pace so that by 2006, Meyers Fruit Farms and Greenhouses had grown to 10 acres of greenhouses and 300 acres of orchards.

Fred is now the operations manager.

His sister, Elly, was a teacher for a while before returning to the farm to take care of the office, which has become quite involved because of the size of the business and the shift of the flower operations into exporting. Elly coordinates the paperwork required for shipping, ensures the computer programs are running smoothly, and also handles human resources, all of which keeps her extremely busy. She loves working with the family business, an environment in which she was born into and raised and which she enjoys immensely.

Fred has maintained his passion for farming. This is a continually challenging business. It requires considerable business foresight, the ability to quickly respond to changes in weather or to machinery breakdowns, and a dedication to customer service and keeping them satisfied. This is an environment he enjoys. He also knows that to accomplish everything required for a successful business, he must surround himself with extremely qualified help from family and those outside of the family.

Since 1972, the company has been utilizing the offshore labour program in its orchards. And with the change in regulations in recent years, the program is now a great asset for both orchard and greenhouse production. Two of these key employees have worked with the Meyers family for 27 years, three for 19 years, and more than seven others have been with them for 16 to 17 years. They have definitely become part of the family, and they have a great deal of respect for everyone, especially Opa and Oma!

Fred credits the success of the business to their dedicated employees who care for every job as if the business was their own. Arnie Vlaar began working at Meyers right out of high school 20 years ago, and remains a key production team member. Nick DaMore, who has been with the company for 19 years, keeps the machinery operating properly and coordinates every construction and expansion project with dedication and enthusiasm.

About five years ago, Fred decided it was time to market directly, instead of working with wholesale brokers. So it was that James Ward joined the company, bringing with him his sales experience and industry contacts. His expertise and the company’s ability to produce quality products has been a successful combination. To supply customers with products they don’t grow, the company is now a broker for other growers.

The latest round of expansion meant more important roles needed to be filled. The family was thrilled when Elly’s son, Aron, and Fred’s son, Jimmy, decided to join the company.

Aron, a teacher, decided that the greenhouse provided a great career change opportunity. He was initially torn between the two professions. But it was his love of physical labour, the ability to be directly involved in every process in a business, the chance to work with family – which, to him, is a great privilege and reward – and the challenges and variety of greenhouse work that outweighed the daily routine of teaching.
Jimmy graduated from the University of Guelph with a degree in political science and history. Coming back to the family farm was a well thought-out plan. He knew he could contribute to the continuing success of the family business, and he always enjoyed the pleasant environment of working in the greenhouse along with other family members. He especially enjoys working with his Opa, and joined him at the Toronto Market the past two seasons. He enjoyed every minute of the Market experience, and the chance to learn from his Opa.

Fred loves the chance to work with his parents, from whom he continues to learn every day. The business benefits greatly from their experience, and they serve as role models of how successful family businesses are created and maintained. Fred can build on that heritage, which he has already taken to another level. The business is fuelled by the energy and excitement everyone brings to work each day.

Jim and Clazina built this family business success story from very humble roots, and I could easily see their joy of accomplishment and satisfaction when I talked with them about its history. Jim is in the greenhouse every day, and it was only six years ago that Clazina stopped doing the books, though she enjoys her walks through the greenhouse to keep up with everything that is going on.

I have been involved with the greenhouse business for the last 28 years. I’ve always found that the businesses that remain successful for two or more generations are those with a pleasant working environment. These are also companies in which employees are respected for their hard work, and in which they can have fun at the same time.

Yes, Jim, the days of one-cent-a-gallon oil are long gone, but what you and Clazina built as a family – a business in which a third generation has found a home after trying other careers – is something of which you can be very proud. Yours is a great example of a successful family business, and an inspiration to many others.

Melhem Sawaya of Focus Greenhouse Management is a consultant and research coordinator to the horticultural industry. Comments on this or any other article are always welcome by e-mailing him at
focussawaya@kwic.com.