In the early 1990s, an Ontario farm, that for more than a quarter century had cultivated a loyal following among fruit and vegetable consumers, recognized and pursued new market opportunities. The result? It has since become a dynamic player in North American cut flower and dried arrangement markets. 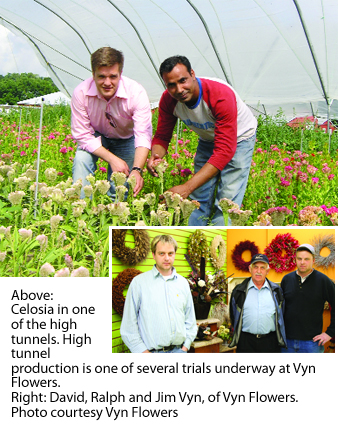 In the early 1990s, an Ontario farm, that for more than a quarter century had cultivated a loyal following among fruit and vegetable consumers, recognized and pursued new market opportunities.

It has since become a dynamic player in North American cut flower and dried arrangement markets.

And while still based in Hamilton, this family business recently expanded the scope of its operations with the opening of a cut flower subsidiary in Colombia.

Vyn Farms, established in 1966 by Jacob Vyn and his son Ralph, has grown into one of Canada’s largest outdoor producers of cut flowers. While the elder Vyn has retired, Ralph remains as company president. Joining him on the management team are sons David, who looks after marketing, and Jim, who is in charge of production.

Ralph remains a hands-on manager, “a guy with dirt under his fingernails,” noted national sales manager Lawrence Hopman. “He works harder than anyone else here.”

Vyn Farms stopped growing produce in 1992 and immediately began growing field flowers for the dried cut flower market. It now has 150 acres in production in Ontario, and is one of Canada’s largest producers of cut sunflowers. “Our entire team works hard at developing value-added, retail-ready dried floral products,” said Hopman.

In 2005, the Vyn family acquired the Colombian farm. Flowers from there are flown into Toronto and Miami twice weekly for distribution throughout Canada and the U.S. “This move has catapulted our company from being a seasonal grower into a year-round producer,” Hopman explained.

The company’s tradition of innovation is being expanded under the direction of horticultural specialist and production manager Ahmed Bilal. He received his M.Sc. with Honours in plant breeding and genetics in his native Pakistan, before continuing his studies in Germany in the field of biotechnology.

Among his duties are applying integrated pest management strategies with field-grown cut flowers, and fine-tuning production techniques for the more than 40 crops grown by the company. There’s a fair amount of research involved with his work. With several trials underway, Bilal and Vyn Flowers are doing a fair amount of trail-blazing with their field-grown cut flower research.

Unlike greenhouse production where the environment can be controlled, field production is much trickier; Mother Nature plays a much larger role and can be quite fickle. That’s why soil management is so important, said Bilal, as growers must maximize this environment for optimal crop performance in both yields and quality.

Management of diseases and pests can also be challenging. Pest management controls, for example, must not harm the natural predators, allowing them to help keep pests in check. “We are looking for the appropriate technical and chemical controls with which to grow profitably.”

Some possible controls may already be in use in Canada in field vegetable crops or in greenhouses, but application must be made with appropriate regulatory departments for registration on field cut flowers. Vyn Flowers has been assisting with a number of registration applications.

Bilal adds that some chemicals registered elsewhere simply don’t work here on those same crops. That’s why trialing is so important.

The company’s weed and pest control strategies have been successfully fine-tuned, resulting in very few problems with which to contend. (Indeed, a sample sunflower we viewed had a welcome guest … a bee.)
This part of Ontario, located just a few kilometres from Hamilton, is well situated for cut flower production. The soils, however, are low in organic matter, about 1.7 per cent compared to the 2.5 per cent that would be ideal. Careful cropping practices and field rotations involve animal manure and green manure applications. These rotations have satisfactorily boosted organic material levels, resulting in quality crops with few stresses that might make them susceptible to disease or pest pressures. Inorganic fertilizers are added to improve the soils.

By way of comparison, organic matter concentrations in soils at their Colombian farm are about 25 per cent. The lab conducting the tests thought the soil was from compost.

Some crops are seeded in the fall. A good snow-covering helps insulate the seedlings until germination the following spring. Many crops also require cooler temperatures in the early spring for germination. If it’s too warm, germination is affected. However, mild winter conditions can leave the beds largely exposed and the crop can be lost. “We rely so much on the weather,” said Bilal.

Hoping to buffer some of that environmental influence, the company is trialing high tunnels. The greenhouse-like structures result in temperatures that are about 4ºC warmer than the surrounding fields, and that means growers can extend the season earlier and later.

“Those producing flowers earlier and later are the market winners,” said Bilal.

Hopman agreed, saying the units might mean another four to six weeks of sales with some crops.

They are now trialing about three-quarters of an acre with the Haygrove tunnels. “The jury is still out,” cautioned Hopman.

They will be testing various varieties of cut flowers under tunnels to see which of them benefit and by how much. The structures provide not only warmer conditions, but an element of environmental control. For example, said Bilal, watering can be more precisely managed. The drier foliage should mean fewer disease and insect problems.

In another trial, they are adding coconut fibre to some soil beds to increase their water-holding capacity and organic concentrations. This will hopefully improve the porosity of the soil. It will be a few years of testing to determine which concentration of added coconut works best for the various crops.

Vyn Flowers uses its own seeds for some of its crops. Bilal collects seed from only the best performing plants, thus ensuring greater quality control in subsequent crops. They are looking for plants with great vigour, that are true to their type and colour, and that have improved germination.

They also apply their own seed treatment to ensure the plants get off to a good start, with reduced disease or pest pressures.

The major crop is sunflowers, with 40 to 50 acres grown each year. Vyn Flowers is well-known for all its crops, but sunflowers in particular.

“Word of mouth (endorsement) is so important,” said Hopman. This year they began branding their flowers, and it’s paying off. Consumers and retailers are asking for Vyn flowers by name. “Our name is on those flowers,” he said. “If they last longer and look better, people will ask for them. Consumers and florists remember us.”

The branding concept for cut flowers is quite new. To the best of his knowledge, Hopman believes there are very few cut flower growers branding their products for retail sale.

The business is split 50/50 between fresh cut flowers and dried arrangements. The creativity of their designers is a major reason for the company’s success in the dried arrangement market, said Hopman. And thanks to dyeing capabilities, it’s not just the mix of flowers that makes these arrangements unique, but the vivid range of colours.

Staffing levels at the Canadian farm rise to 30 people during the peak cut flower season. They also have seven office employees, and 20 people employed in drying flowers, completing dried arrangements, and shipping.

The Colombian operation, with 15 employees, includes a one-hectare greenhouse and two hectares of field production.

The company is enjoying its cut flower and dried arrangement success, but it faces constant reminders of its roots. Even though it’s been about 15 years or so since they last grew pick-your-own produce, “we still get people asking about picking strawberries,” said Hopman. “People still stop by to ask about our potatoes.”