One of Canada’s leading greenhouse entrepreneurs, well known for his boundless generosity, has received special home town honours. “We thank you for demonstrating in your life and vocation a commitment to helping people in need here and around the world.” 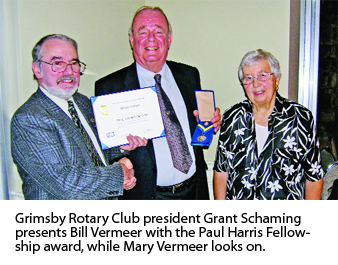 Bill Vermeer, founder of the Westbrook Group of Companies, has received the prestigious Paul Harris Fellowship from the Rotary Club of Grimsby, Ontario. The award recognizes his many years of community support and charitable gift giving, ranging from minor sports teams to hospital expansion projects.

Rotarian and fellow grower Bob Martin said the award is well deserved. The Rotary Club, he noted, is based on business and community people “who tend to view things a little differently than others in the community.

Westbrook is held up time and again as a company that works hard, is very successful, is good to its employees, and is a good corporate citizen.”

Echoing similar sentiments by several other local politicians, Grimsby Mayor Bob Bentley said the community has long been the benefactor of the family’s generosity. “A lot of things you do are behind the scenes.”

Rotary president Grant Schaming said Vermeer “exemplifies the humanitarian and educational objectives of the Rotary Foundation. We thank you for demonstrating in your life and vocation a commitment to helping people in need here and around the world.”

The Vermeer family had, for generations, been greenhouse growers in the Netherlands. Bill soon followed suit after a few years in construction and factory jobs. He and Mary worked and sacrificed until finally in 1959, Bill had the opportunity to work for Deny DeJong at Westbrook. He soon became a partner in the business, and acquired full ownership in 1971.

The initial 24,000 square feet of growing space has grown to 1.5 million square feet. The company currently employs 350 people, with the number doubling during the spring season.

Longtime friend and company CEO Rej Picard said the growth of the company was based on the founder’s “entrepreneurial spirit, his foresight, and his ability to find the right people and let them do their job.”

Vermeer’s compassion for others was evident early on, and has continued to the present, noted Picard. “While Bill was growing his family and building his business, he was making sure that integrity and high values became part of our business philosophy, that we were a caring company, that we were good neighbours, and that we supported our community to the best of our means and ability.”

Vermeer encouraged others to share in those philosophies. “He has been very successful,” said Picard, “in instilling those qualities in all of us that are associated with him.”

Vermeer said he was almost “speechless” in accepting the award. He shared the accolades with his wife. “Mary has always been there,” he said. “She has done a tremendous amount of work.”

He also thanked their children for their love and support, and also paid tribute to “all the people who work for me.”

Rotary International, the world’s oldest service club organization, has 1.2 million members in 32,000 clubs throughout 140 countries. Chicago businessman Paul Harris was the founder. Rotary’s motto, “Service Above Self,” exemplifies the humanitarian spirit of the organization.