Not only have Niagara College researchers identified three native plants ideal for green roofs, they also came up with best practices in irrigation, and identified an effective growth medium to properly nurture the plants. 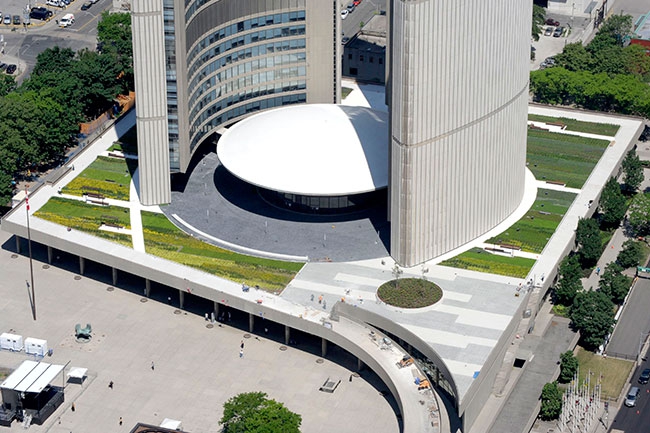 March/April 2015 – While green roofs have become an increasingly popular approach to replacing the vegetation taken away by urban construction in southern Ontario, there remain challenges to making them sustainable.

To address some of those challenges, including biodiversity, affordability and longevity, a Niagara College horticulture team has spent the last several years undertaking a multi-phase and multi-year research project on the subject.

Not only has the team identified three native plants shown to be successful in the long-term for a roof setting, it has also come up with best practices in irrigation, and identified an effective growth medium in which to properly nurture the plants for better endurance.

The five-year journey began in 2008, in the greenhouse production course at the College’s Niagara-on-the-Lake campus, during one professor’s casual conversation with a local company, St. Williams Nursery and Ecology Centre.

HELPING CITIES BECOME MORE SUSTAINABLE
“You put a green roof on a roof to cool a city, to absorb the carbon dioxide pollutants and to produce more oxygen,” explains Bill MacDonald, faculty member and one of the lead researchers on the project. “The plants produce more oxygen, they slow down the rainwater, and act as a buffer that puts less water into the storm sewers.”

However, adding a green roof of traditional sedums does not necessarily replicate the biodiversity of what was there before the building was erected, MacDonald notes.

Because of their variety, availability, hardiness and drought-resistance, the many varieties of low-lying sedums are often the preferred choice for green roofs.

But horticulture experts see a fundamental flaw in this approach: “You have taken away a whole ecosystem, so you aren’t doing anything for biodiversity,” MacDonald explains.

“Sedums cool the air and slow down water going into the storm sewer, but otherwise they aren’t encouraging the development of an ecosystem that is similar to what was there before. St. Williams suggested to us that we look into using native plants, and therefore attract other native species, birds, insects and pollinators.”

After an initial research phase, consulting recent publications and the work of others on green roofs in the same climate, the applied research phase began.

With funding from the federal government, outdoor platforms were built on college property near the greenhouses, several native species were identified as the potential “best performers,” and testing began. In the end, the top three performers were the Nodding Wild Onion (Allium cernuum), Upland White Aster (Solidago ptarmicoides), and Prairie Smoke (Geum triflorum), also known as Old Man’s Whiskers.

However, for these top three species to perform at their best, the questions of irrigation and of the best growth medium became just as important to address in finding the formula for success.

The research team consulted with Dramm Canada to determine the most cost-effective and productive method for irrigating a green roof.

“We discovered that in the long term, the plants that were irrigated lasted longer,” says Tanya Blankenburg, another faculty member and lead researcher.

“Dramm came to us and said that they were looking for research to show that irrigation works. When companies are cutting costs, (an irrigation system is) the first thing that goes, but if it is done right, it really isn’t that expensive.”

The team therefore went back to the platforms to test various methods of supplying moisture to the three preferred native species.

The research, which has included students in courses and part-time student research assistants at every stage, revealed that even a low volume of water could still be effective when using a slow-drip system.

With the best native species identified, and best practices in place for irrigation, the next step involved discovering what media would work best. Green roofs add significant weight to the roof of a building, Blankenburg notes, because of the combination of adding containers, plant material, the soil (or growing medium), and the necessary moisture. Therefore, a lightweight soil would be ideal. Yet at the same time, a lighter growth medium has the potential to erode on a windy rooftop.

“We looked at a traditional shale-slate material with low organic matter, which is very, very heavy, before looking at a mulch with high organic matter, and finally an ultra-lightweight media made from recycled materials, which is like a Styrofoam with lower water-holding capacity.”

Again, by consulting with industry partners such as St. Williams Nursery and Ecology Centre, and Gro-Bark, the research team figured out a way to mix the lightweight media with a natural cover to weigh it down, slowing or altogether stopping the erosion.

Throughout the project, student involvement was key to conducting each research phase, including analyzing the results, and even presenting the results at industry conferences, the researchers say, for local, regional and national audiences.

More than 60 students per school year, as well as nine paid research assistants, were able to work on the project, adding that real-world experience to their resumes, and helping them land industry-related jobs upon graduation. Not only will the industry partners – and anyone utilizing or considering a green roof – benefit from the knowledge of this research project, but the graduates are now equipped with the latest best practices for green roofs as well.

The green roof project was funded by the Natural Sciences and Engineering Research Council of Canada, through a grant to the Agriculture & Environment Innovation Centre at Niagara College.

The Centre, as with other centres in the Research & Innovation division, provides real-world solutions for business, industry and the community through applied research and knowledge transfer activities. Research teams conduct projects that provide innovative solutions, such as producing and testing prototypes, evaluating new technologies, and developing new or improved products or processes for small- and medium-sized businesses. With funding support from various provincial and federal agencies, students and graduates are hired to work alongside faculty researchers to assist industry partners leap forward in the marketplace.

Carolyn Mullin is the dissemination and outreach officer with the Research & Innovation division of Niagara College.
Print this page