If you’re looking for new customers, how about checking the farmers’ markets in your region? In addition to increased sales, market feedback on new products is immediate. 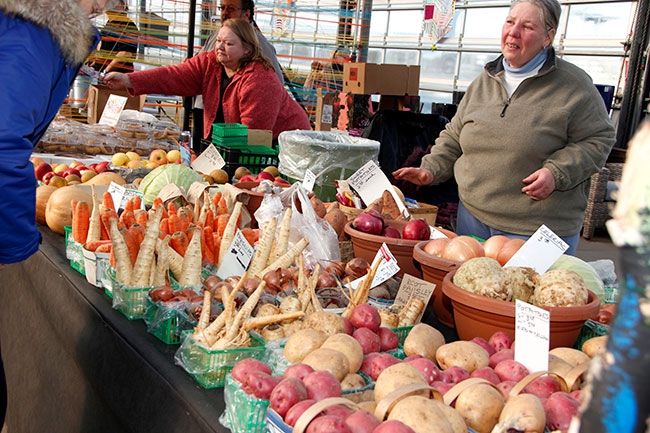 For some greenhouse growers across Canada, the benefits of selling flowers or vegetables at farmers’ markets is clear.

They’re reaping many benefits from the practice, and have learned what strategies and techniques give them the best results for the time and effort they invest. Because at least some greenhouse growers are finding success with this sales avenue, Greenhouse Canada has looked at whether more should consider the idea, as well as pitfalls to avoid in moving forward.

We first went to Robert Chorney, executive director of Farmers’ Markets Ontario, and past-president at Farmers’ Markets Canada, for information on how Canada’s roughly 600 farmers’ markets are faring across the country. Briefly put, they’re definitely on a roll.

Chorney believes farmers’ markets have become more popular because they allow growers to gain the substantial benefits of direct sales and customer interaction. As well, more consumers want to know area farmers and are keen to buy locally produced food.

Chorney notes that the term “farmers’ market” should only be used for markets where growers sell their harvest and “there is produce in abundance.”

Some greenhouse operators — such as Salisbury Greenhouse in Sherwood Park, Alberta — host a farmers’ market on site.

“It’s a full service, year-round market that occupies the parking lot from early May until around Thanksgiving, and moves indoors for the winter,” co-owner Rob Sproule explains. “We have up to 50 vendors with a huge array of products.”

Sproule attributes the success of the nine-year-old market to the fact that it’s a separate entity, run by a dedicated group of people with expertise.

“Salisbury Farmers’ Market operates independently of Salisbury Greenhouse,” he adds. “It’s provincially approved (there are many benefits to that) with its own board and management. Salisbury Greenhouse is the host. The farmers’ market’s independence allows them to operate as they would see fit, not how we see fit; we’re greenhouse operators and not market operators. That being said, of course we work closely together on issues from marketing to lighting.”

The market attracts up to 500 people a week, many of whom Sproule believes would not come to Salisbury Greenhouse otherwise.

But having the farmers’ market on site is not just about increasing foot traffic for this business. “The market’s brand is that of freshness, health and quality,” says Sproule.

“It’s exactly the same as Salisbury’s brand promise, so our reputations help each other as both entities evolve. The people who shop at farmers’ markets are often young families interested in healthy lifestyles; in other words, they are our target demographic…Over time, the presence of the market has increased our new customer count, helped lower the average age of our customer, and played a role in increasing our sales overall,” he says.

With the market running every Thursday evening, Salisbury Greenhouse typically kicks off weekend sales at that point.

“In the middle of winter, when the greenhouse industry is getting very little traffic flow, it’s pretty awesome to fill up the parking lot every week,” Sproule adds. “I believe that our two businesses have achieved a mutually beneficial relationship that can serve as a model for other greenhouses to follow. For three quarters of the year we have the extra space, so let’s fill it up!”

The owners of TERRA Greenhouses in Ontario think similarly. TERRA hosts its own “vendor market” at its Milton location in the winter only, because as their marketing director Bill Bown explains, the facility is full of TERRA products during the spring, summer, fall and Christmas.

This is the third year for the “TERRA Home Winter Market,” and the selection of products has expanded with each anniversary. Beyond produce, there are many meat products for sale, as well as fermented tea, candles, bath products, maple syrup, baked goods, wine, smoked fish, spices, jewellery, kettle corn, kitchen products, condiments, artisan cheeses and much more.

There are also a variety of food trucks operating on site.

“They are held in a large greenhouse environment providing an outdoor feel for the vendors and customers alike,” he notes. “We invest in advertising and marketing to support the market, and social media engagement is encouraged and supported.”

To keep things fresh, they use a different theme each year. For 2015, it’s “Urban Market.”

As it is for Salisbury Greenhouse, for TERRA, their vendor market is definitely worth the effort.

“Although it’s difficult to completely quantify traffic generation, we did have over 250 cars in our parking lot on a Saturday in January,” Bown says. “This is extremely good traffic for our industry in southern Ontario.”

As Salisbury Greenhouse has found, TERRA’s market has brought TERRA a different customer who would not necessarily have responded to other marketing efforts or previously discovered the brand.

“Exposing this customer to the environment we offer provides return visitors in our other seasons,” Bown says.

He adds another bonus to their vendor market involves “working with other small business owners, farmers and producers to create an opportunity for them at a time of year traditionally void of market opportunities is a great way to stay connected to your customers and the communities in which they live.”

SETTING UP SHOP AT THE MARKET
Gull Valley Greenhouses in Blackfalds, Alberta (see grower profile cover story in March/April 2014 issue) has no farmers’ market on site, but has done a lot of sales through the Old Strathcona Farmers’ Market in Edmonton (for close to 15 years) and the Calgary Farmers’ Market (10 years), in addition to wholesale marketing.

Company owner Phil Tiemstra says having a stand at these markets provides his family with an “excellent” return.

“It is wonderful to be paid a fair price for our produce and be able to pay our bills at the end of the day,” he notes.

Gull Valley had a stand at the Old Strathcona market from its beginning, starting with a few varieties of tomatoes and adding many more over time, plus several types of hydroponic lettuce and fresh herbs, coloured sweet peppers and beans.

Some of the spinoff benefits have been the opportunities to supply restaurants in Edmonton and Calgary.

Doef’s Greenhouses in Lacombe, Alberta (see grower profile cover story in December 2013 issue) is another operator that has been selling at farmers’ markets — in this case, for over four decades.

“We started by selling just our tomatoes and long English cucumbers at a small start-up market in Red Deer, which has since become one of the biggest markets in central Alberta,” business co-founder Helen Doef says.

“We have, over the years, expanded our line to include everything that we grow in our greenhouse: tomatoes [vine, cocktail, cherry, yellow cherry, beef], cucumbers [long, English, mini English, salad], eggplant, sweet peppers, hot peppers, lettuce. We’ve added these various crops as customer demand has indicated,” she says.

At the market, employees remind customers that their greenhouse-grown veggies are also available at many local grocery stores, and about other markets at which Doef’s produce can be found.

The family loves the customer interaction provided by the farmers’ market sales.

“There is a bond of trust between them and us — they know that they’re getting the freshest, tastiest, safest locally-grown product from our family farm,” she explains.

Besides increased sales and enjoyment of customers, the family finds other aspects of value in their farmers’ market involvement. Doef notes it’s a very good avenue for trying out new crops and gauging interest in others whose popularity is declining.

They’ve also learned over the years “that it’s always good to have at least one family member working at our booth on a market day,” Doef says.

Tiemstra also places importance on having a knowledgeable person present to answer questions.

Overall, Doef notes although it’s rewarding, selling at farmers’ markets is also very time-consuming, and they’ve learned to not stretch themselves too thinly by attending too many markets in one week.

Tiemstra agrees. “Marketing this way has a huge impact on our social life in that every Saturday during the production season is taken up with attending the market,” he says.

While it has its challenges, it’s clear that selling greenhouse-grown produce in a market setting is working well for some in the industry across the country. And their success may indicate this to be a growing trend.

Making your market stall stand out
There is a great deal of advice on the Internet about how to attract customers to a market stall, so do your research, but here is a roundup of basic tips. Your extra touches may also attract the attention of other sales avenues, such as restaurants.
•    Include a sign and perhaps a sandwich board in front explaining what’s fresh and new. And remember that witty quips or interesting facts about your operation are appreciated by customers!
•    Include pictures of the outside and inside of your greenhouse within your booth. They attract the eye, and will spark conversations.
•    Hand out recipe cards or a one-page newsletter with each purchase.
•    Include a sign-up sheet for follow-up calls (if you have run out of something, for example) or for your emailed newsletter. Have business cards on hand as well.
•    Display your product attractively and in package sizes that are most popular for the market clientele.
•    Wear a t-shirt or polo shirt with your logo on it. This is professional, and will also attract the eye of customers.
•    Take along a small cooking appliance to provide samples and attract more customers with the aroma of freshly sauteed veggies.