The award not only recognizes business success, but also Robert Bierhuizen’s selfless dedication to advancing the industry and helping others. 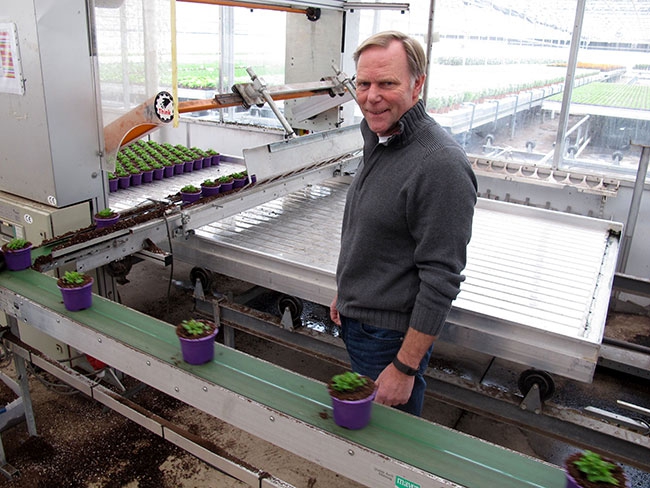 In an industry know for commitment to life-long learning, Robert Bierhuizen has always been an eager student.

The veteran innovator and mentor has been recognized with the 2014 Lifetime Achievement Award by Flowers Canada Ontario.

The award recognizes a grower, distributor or retailer who:

“I’m so very humbled to be honoured this way by my colleagues,” said Bierhuizen in accepting the award.

Born and raised in Rotterdam, Bierhuizen’s first experience with greenhouse crops was with an after-school job picking tomatoes.

EXTENSIVE HORTICULTURE STUDIES
The work clearly made an impression on him, because prior to joining the Dutch armed forces, he completed seven years of study in horticulture.

Bierhuizen and a friend established a successful landscaping and greenhouse tomato and lettuce farm.

In 1976, he visited Canada, and drove through the Niagara region. He met with local industry leaders Bill Vermeer and Andy Olsthoorn, who both encouraged him to move to Canada.

The following January, Robert and his wife Francis – married only a month – moved to Ontario.

“Love must indeed be blind,” Robert quips, “ because we arrived in Canada during the worst winter in many years. There were mountains of snow as we drove from the airport.”

(Editor’s note: the Niagara region was particularly hard hit by “The Blizzard of 1977.” Stong winds combined with a heavy snowfall to create drifts in some areas 14 metres tall, notes the Wikipedia recap.

“The winds were accompanied by Arctic-cold temperatures, making it feel like −60 °F (−51 °C) outside.”

Hardest hit were the communities of Port Colborne and Wainfleet. The travel conditions were so bad and deteriorated so quickly, some 2,000 Niagara region students had to spend at least one night stranded in their schools during the storm!)

Bierhuizen began working at Olsthoorn’s new greenhouse operation, and quickly established strong partnerships and a solid base to begin his new farm. He and Francis established Sunrise Greenhouses in 1982.

“There were some tough times during the early years,” he now recalls. Interest rates were high for a time early on, among other challenges, but “we always bounced back.”

The business grew steadily over the years. Their three children have grown up in the family business, with rowing and horses balancing their work life.

COMBINING INNOVATION WITH STRONG MARKETING
Sunrise has long combined innovation with strong marketing. The Bierhuizens early on saw the potential of specialty items and steered clear of commodity plants.

“We sought new products all over the world,” said Bierhuizen. “Now the breeders are coming to us because of our reputation of being able to introduce new products successfully into the North American market.”

In addition, they also invested keenly in new technology to improve efficiencies and reduce operating costs.

The Lifetime Achievement Award not only recognizes business success, but also Bierhuizen’s selfless dedication to advancing the industry.

“Rob has always been active in the sector,” noted award presenter William Ravensbergen, “seeking ways to work together for everyone’s common good.

“And with his innovative and progressive way of thinking, and his membership on boards and committees, Rob has been a driving force behind many of the association and industry fixtures we think of as commonplace today.”

STRONGER INDUSTRY VOICE WITH GOVERNMENT
Bierhuizen worked for many years with industry colleagues to ensure the industry developed a stronger voice with government departments and agencies, and other farm groups.

That leadership was reflected in his being appointed by federal agriculture minister Gerry Ritz to the Minister’s Program Advisory Committee on business risk management programs. There are only two appointees from each province, and most represent the cattle, grains and oilseeds sectors.

He was involved in meetings with AAFC’s AgriStability processing centres and Agricorp, which led to a better understanding of inventory evaluation and the quicker processing of claims.

He was also instrumental in creating F&V Energby Co-op when there was an opportunity for growers to benefit from an open market for natural gas and its transportation through pipelines.

In 2000, he received the Research Innovation and Application Award from Flowers Canada.

ON THE VINELAND RESEARCH AND INNOVATION BOARD
He was appointed to the first board of directors of the Vineland Research and Innovation Centre, and remains a board member today.

Sunrise has worked closely with Vineland researchers in the development of robotics and new varieties.

“Rob has always been at the forefront of new product development and has recognized the need for constant change in production practices and marketing,” said Ravensbergen.

Sunrise has invested in projects at the University of Guelph, Niagara College, and at Vineland.

Bierhuizen has always believed in partnerships to help advance the industry “for the common good.”

The support of his family has allowed him to dedicate so much of his time to industry studies, committees, delegations and leading edge research projects.

“Without the support of Francis and our children, I wouldn’t have been able to spend so much time with these committees.”

For more grower profiles, visit the “Business” section at greenhousecanada.com.