Plants behave differently, even when it comes to nutrient uptake. In the case of iron, some plants can be more or less efficient than others, leading to toxicity or deficiency. 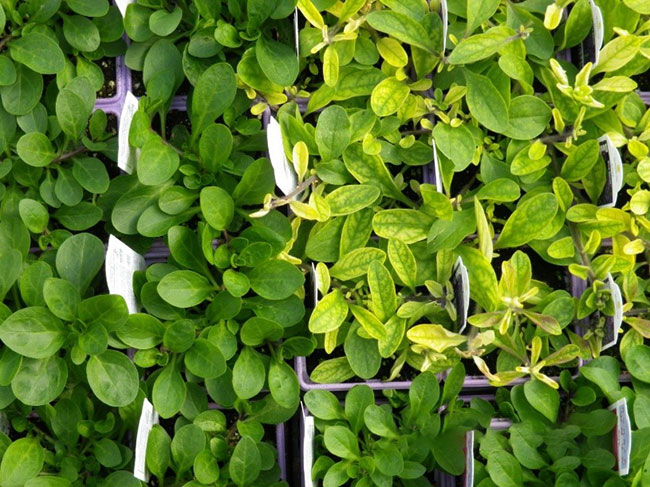 Iron-inefficient plants are fast-growing but start to show symptoms of iron deficiency at high pH, despite enough iron in the feed.

During this COVID-19 pandemic, familiar workshops and conferences are being held by virtual means, which is a good alternative, but face-to-face interactions about plants do become limited.

Growers are always innovative, so they send short videos and cell phone pictures through text messages, WhatsApp or the many other platforms available. Soon, we will be getting ready for the 2021 bedding plant/ornamental season, so let’s take this opportunity to review symptoms of a common nutrient deficiency – iron.

There is a group of plants known to be iron-inefficient, and it includes petunias, pansies, bacopa and calibrachoa. They are fast growing, require regular levels of nitrogen above 200 parts per million (ppm) and tip the pH of the growing medium towards the alkaline side. However, once the pH starts going above 6.2, these plants begin to show symptoms of iron deficiency. That is what is shown in the first picture.

It is obvious why this group is called iron-inefficient. They quickly show symptoms of iron deficiency despite the fact that there is enough iron present in the feed. Most of the time when iron is deficient, manganese is also deficient. A sharp eye, experience and a tissue test can confirm that. Typical iron deficiency occurs in the youngest leaves where the major veins remain distinctly green and the interveinal area (between the veins) turns yellow. In the case of manganese, even the smaller veins spread across the leaves start losing their green colour and a “netted” pattern of yellow becomes more visible.

Many times, growers have asked why plants pictured on the left, in the first photo below, are perfectly green and not showing any signs of deficiency. It is not that I selected these plants from other trays and put them there for comparison. The reason appears to be in the growing medium. Sometimes, when lime is added to the peat moss to raise the pH, the media may not have been adequately mixed by the grower and thus, the pH of the starting medium was lower to begin with. The growing media manufacturing companies add enough lime to guarantee a certain pH (e.g. 5.0). This added lime also takes time, needing about two to three weeks to react slowly after wetting. I always advise growers to add potassium bicarbonate at a rate of 1 lb/3.2 ft3 bale, which raises the pH to the desirable range of 5.8 to 6.0

In the second photo (next page) is a picture of a geranium, an example of a plant that is iron-efficient. When pH drops to the acidic side, the uptake of iron and manganese increases by almost four times, thus resulting in toxicity. The speckling seen on the leaves is an accumulation of iron and likely manganese as well. Once speckling symptoms appear, the damage is done and the affected leaves have to be removed. The desirable range for geraniums is between 5.8 and 6.4. Below a pH of 5.8, iron toxicity starts. Above 6.5, a deficiency of iron and manganese also occurs. Other examples of iron-efficient plants include impatiens and marigolds. 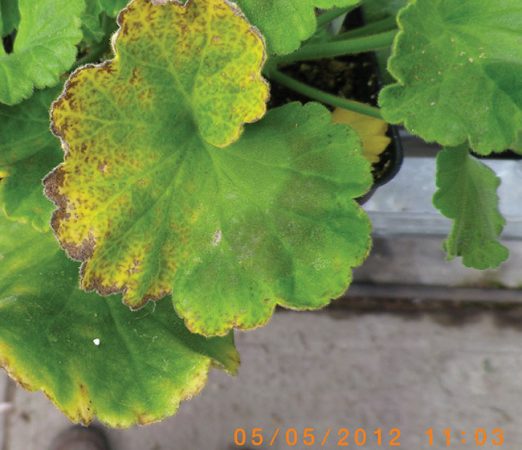 The iron efficiency of this geranium causes symptoms of toxicity when pH drops to the acidic side.

Here are steps which can be taken to correct the pH. That should be the priority. Most of the time, there is enough supplied through irrigation, though I have seen some poorly designed fertilizer programs with iron less than 0.5 ppm in the feed. Some growers have a tendency to foliar feed iron chelate or iron sulfate, which may not be effective.

When taking corrective actions to bring the pH down or up, it may take two to three weeks before a target pH is achieved, and that is very important in timing the saleability of the plants. Take the example of the geraniums in the second picture above. The picture is dated May 5, a time when customers are coming into the greenhouse. If you’re starting remedial measures at that time, it will take about 15 to 20 days to bring the pH to the desired levels. So monitor the geraniums and other plants regularly, and watch for any trends in pH – whether up or down – before symptoms appear.

For the group of plants in the “iron-inefficient” category such as petunias, bring down the pH by adjusting the pH of the feed solution or water. The lowest you may go is around pH 5.5. Many growers use ammonium-based fertilizers for some time, which helps to bring down the pH.

In the case of “iron-efficient” plants like geraniums, the pH needs to be brought up. I have seen cases where the pH has gone as low as 4.5 and damage was significant. Potassium bicarbonate is commonly used to bring up the pH. When pH is that low, it is recommended that growers stop fertilizing because the plants are not going to take up certain nutrients and further toxicities may occur. Some precautions are suggested with the use of potassium bicarbonate, such as washing the leaves after application. Potassium can also increase significantly in the root zone. Watch the electrical conductivity (EC) closely, and leach with water if needed.