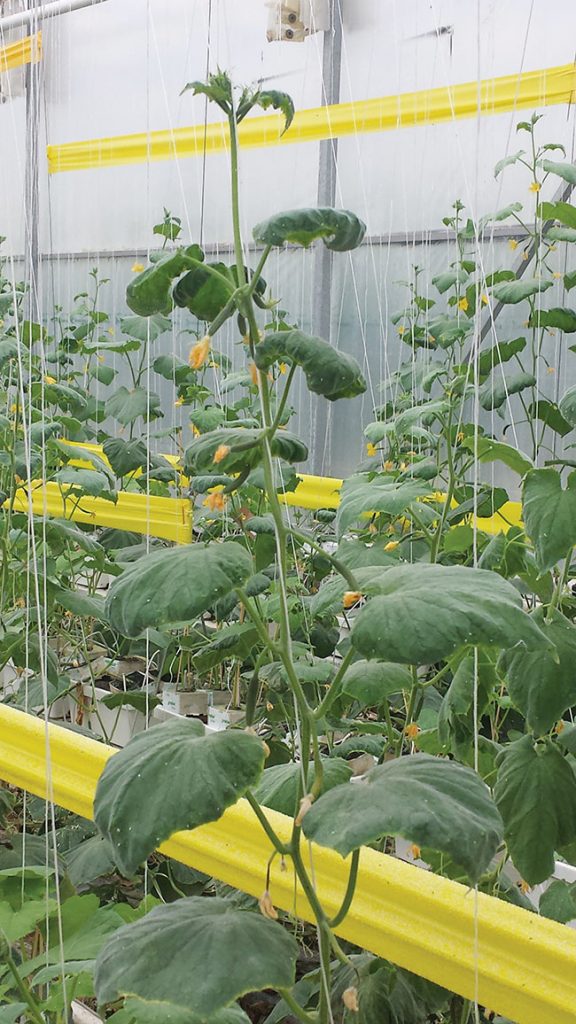 These cucumber plants are showing signs of calcium deficiency. Can you recognize them? Photo credit: M. Mirza

Sixteen elements are considered “essential” nutrients for proper growth of plants. We know enough about how to deliver them and in what quantities and ratios at different stages of growth. But in spite of this, we still encounter deficiencies sometimes.

There is one particular deficiency that I have seen in some fall crops. Pictured here is a cucumber crop planted in early October and expected to go through winter under supplemental lights. What’s also shown is a typical case of calcium deficiency in cucumbers. Here are some key pointers for diagnosis:

Calcium is a macronutrient and typically needed in larger amounts. Once absorbed through the roots, it is moved to actively growing cells and fixed in the cell walls as calcium pectate. This gives strength to cell walls and holds them together, but it also means calcium is immobile. When deficiency occurs, symptoms are first seen in newer, younger growth.

Because calcium is a cation with two positive charges (Ca2+), plants work harder to absorb it compared to potassium (K+) or sodium (Na+) which have a single positive charge. This fact has important practical implications as calcium absorption strongly depends on the movement of water from roots to leaves through transpiration.

Once a calcium deficiency has been diagnosed, consider potential reasons so that corrective action can be taken quickly:

First check that enough calcium is being fed to the cucumber plants. A range between 150 to 200 ppm is considered adequate.

See if there are any pH issues. If the pH goes above 6.4, then calcium can interact with phosphate and sulfate, thus precipitating out and not be available to the plant. This can happen in the irrigation lines and one may see white deposits at the ends of the drippers.

During fall weather, one big factor could be the climate. Since venting is reduced, relative humidity can build up easily. With relative humidity above 80%, transpiration can be reduced. This, in turn, reduces the flow of water moving from the roots to the tops of the plants, reducing calcium supplied to the growing points.

If your computer is able to do so, calculate vapour pressure deficit or moisture deficit (VPD or MD). A VPD of less than or equal to 1 g/m3of air will reduce transpiration and thus calcium supply. This can happen on cloudy days and during low venting conditions. In this case, the corrective measure would be to create what is called an “active” climate by reducing the relative humidity, promoting more aggressive air circulation and avoiding condensation on leaves and fruit.

Under high VPD conditions in the summer when the temperature is high and relative humidity is low, plant transpiration rate increases but at the same time, the plant also reduces the absorption of nutrients and takes up water only. Plants have the ability to do that. Under such conditions, calcium deficiency can also occur.

To summarize, it is especially important during this time of year to maintain an active climate. Keep VPD in the desirable range between 3 and 7 g/m3 of air or between 3.9 and 9.3 mbar.

Plants get carbon, hydrogen, and oxygen, from carbon dioxide and water. Ambient air contains around 400 parts per million (ppm) of carbon dioxide and the rest is oxygen (O2) and nitrogen. We have learned that CO2 can be depleted by plants if fresh air is not replenished into the greenhouse, and plants will stop growing at around 200 ppm of CO2. As for water deficiency, you know what happens. The leaves become very dark green and smaller in size, fruit size is reduced and many other symptoms appear like wilting and brown spots.

Aside from these three elements, plants also need, nitrogen, phosphorus, potassium, calcium, magnesium and sulfur. They are called “macronutrients,” meaning they are needed in relatively larger amounts, anywhere in the 30 to 400 ppm range. Then we have what we call “micronutrients” or trace elements, like iron, manganese, copper, zinc, boron, molybdenum and chloride. The importance of silicon is becoming recognized more and more, and many cucumber growers regularly use silicon in fertilizer programs.

Mohyuddin Mirza, PhD, is an industry consultant in Alberta.