One of North America’s leading producers, they grow over 10 million cut flowers each year, along with about 500,000 of the increasingly popular ‘Samurai’ potted varieties in both 4" and 6" pots. 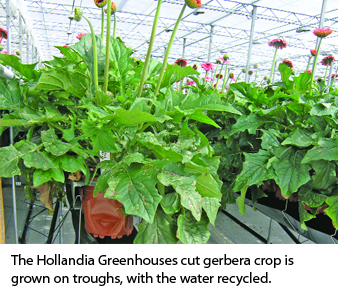 Hollandia Greenhouses is one of North America’s leading gerbera producers, growing over 10 million cut flowers each year, along with about 500,000 of the increasingly popular ‘Samurai’ potted gerbera in both 4" and 6" pots.

Head grower Terry Pastorek led the tour that began with a view of the company’s new bunching machine. It was installed last July by Cybutec Packing and Manufacturing of Abbotsford. The machine is capable of processing up to 3,000 bunches per hour and is fully automatic, cutting and bunching all on the one line.

The company is scaling back poinsettia production with about 24,000 pots grown last season, compared to more than double that amount just a few years ago. The poinsettia crop, he said, is “not a real money maker, but it keeps us busy.”

What does keep them hopping is their acres and acres of gerbera production. The only slow period in production is from November to late December, “and that’s about it,” said Pastorek.

With the larger varieties, they get about 200 to 250 blooms per square metre per year. The minis produce about double those levels.

The company has embraced all the leading computer-controlled environmental and irrigation technologies to ensure optimal growing conditions. The new greenhouses are 4.5 metres to 5 metres tall. CO2 enrichment is an important part of gerbera production.

Gerbera are popular with much more than just people, and Hollandia has to deal with a variety of pest and disease pressures. “We face just about everything,” Pastorek quipped. Leafminer can be a particular
challenge in late summer and early fall once hay cutting in nearby fields begins. The company has enjoyed considerable success with biologicals. “We spend a lot of time and money on biologicals, but they’re effective.” They only spot spray when necessary. “We never had leafminer until four or five years ago, and now they’re quite prevalent.”

Other pests include thrips and whitefly.

The company has recently begun looking to export their product further afield to new markets, beyond just the Pacific Northwest area of Canada and the U.S. “They love our quality,” Pastorek explained.

At the present time, the gerbera are shipped both in wet pack pails as well as in boxes after the flowers have hydrated in water for a few hours in specialized water tanks.