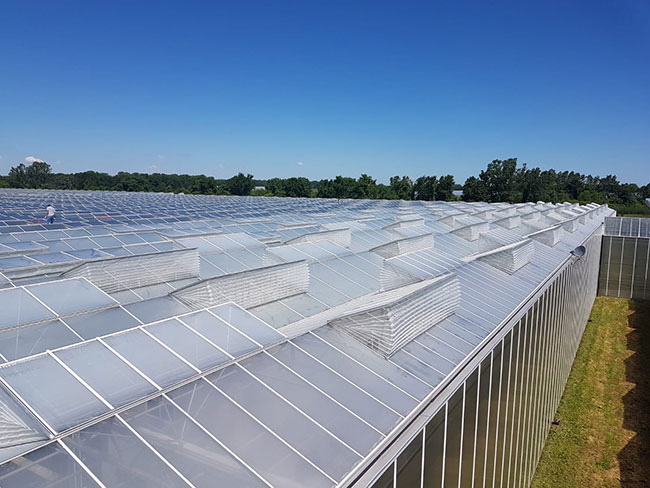 Gene Ingratta, owner and operator of the vegetable greenhouse operation in Ruthven, Ont., says they not only covered the pepper production area, but screened every point of entry into the farm as well. “It’s the first, last and only line of defence to properly control pepper weevil,” he says.

Since the majority of its lifecycle takes place inside the pepper fruit, the weevil isn’t just hard to spot, it’s extremely difficult to control by any means, says Ingratta. “You can scout for it but that’s an uphill battle in the middle of summer when fruits are developing fast, and workload is already at its peak.”

According to Ontario Greenhouse Vegetable Growers (OGVG), a surge in the pepper weevil population led to losses of over $67 million for Ontario’s greenhouse-grown peppers in 2016. “This is a relatively new adoption in our area [that was] largely triggered by the pepper weevil” says Cara McCreary, greenhouse IPM specialist with the Ontario Ministry of Agriculture, Food and Rural Affairs. “Prior to 2017, there were very few operations that had netting. The select few who did were more organic producers because their tools were limited to begin with.” Screen installations promptly rose in the two years following the pepper weevil outbreak.

Unexpected benefits
At first, growers were hesitant to install insect netting screens, concerned about their impact on the greenhouse climate. Depending on the size of the mesh, screens can reduce airflow within the greenhouse and lead to a rise in temperature and humidity. This was of particular concern, given how hot and humid it can be in southwestern Ontario. However, McCreary notes that the positive feedback she’s received from growers have far outweighed the challenges to climate control, which can be managed to a certain degree with fans and forced ventilation.

For Allegro Acres, Ingratta specifically chose mesh dimensions that offered pepper weevil exclusion without compromising the greenhouse climate. “Anything smaller or tighter in size would start blocking too much airflow,” he explains. “And anything smaller than that [size] can be fairly easily controlled with biologicals.”

The screens have also helped block the rain and some of the wind, allowing Allegro to open the vents more while minimizing plant movement. “On rainy days without screens, the vents would be open 10 per cent. With screens installed – 55 per cent,” he says. They experimented with vent openings over the course of two to three months, increasing them a little more each time. “If it’s not a driving wind, those vents could be 70 per cent open.”

There’s been a positive impact on light-induced plant damage as well. The screens are able to diffuse direct sunlight streaming in through the open vents, reducing the incidence of crop burn.

“Fungal diseases like powdery mildew are influenced by poor air circulation, so being able to open vents wider during compromising weather can have a positive effect,” McCreary explains. “Even when the temperatures are colder outside, [growers] can potentially open their vents wider than they normally would because the screens minimize or reduce the amount of cold air coming in.”

By excluding insect pests, birds, and bees, the screens can also help prevent the introduction of vectored diseases. However, their ability to keep bees and beneficials inside the greenhouse has proved to be advantageous as well, and could be an opportunity for use in other crops. “When temperatures are nice and there are food sources outside, [bees] may leave the greenhouse to go forage, so this way they stay inside,” McCreary explains. 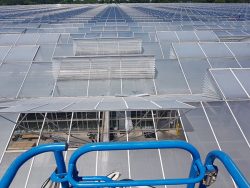 Spring is a good time for installation as growers begin to open their vents . Photo credit: Countrywide Industries 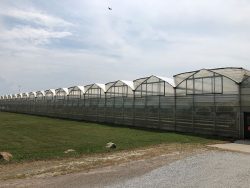 Insect netting should ideally be installed in a clean greenhouse to avoid trapping harmful insects inside. Photo credit: Holland Gaas

Installation and maintenance
“Generally speaking, when you choose a mesh size, you want to think about what you can live with. What do you really want to exclude and what are you willing to allow in?” says McCreary.

The larger mesh sizes that exclude pepper weevil would also help keep out some of the larger flying insects such as looper moths, European corn borer and Lygus. “If you go smaller, you’ll have a greater impact on your environment inside, but you can exclude more [pests] like aphids or whiteflies.” An even smaller size could exclude thrips, but would have a much greater impact on the temperature and humidity inside. Plus, there are many effective beneficials available for thrips and aphids.

Insect screens should ideally be installed in a clean greenhouse, as the netting can trap harmful insects inside and ones that breed through the winter months. Spring is a good time to install them before temperatures begin to rise and potential pests wake up from their overwintering sites, and growers start to open the vents a bit more, McCreary says.

Screens should also be inspected regularly and breaches taken care of promptly. At Allegro Acres, staff clean out any trapped dirt and debris using a power washer and plain water about once every two years. They found that washing the screens in June helped maximize airflow through the summer and minimize impact to the greenhouse environment. If the screens become more dirty at the end of the summer or going into the fall, it matters less as temperatures start cooling off and the likelihood of opening the vents all the way diminishes as they head into winter, explains Ingratta.

Allegro Acres’ insect screen supplier, Holland Gaas, says their products are made from UV-stabilized polyester monofilament threads and are designed to last for a number of years – no replacements have been needed since their company’s inception. In the Netherlands, insect screening is common for breeding nursery greenhouses and seed companies, “but it’s also applied more and more in floriculture and vegetable cultivation,” says Karin Dahmeijer of Holland Gaas.

“What we see is that insects are spreading through different countries and continents, or that they behave differently due to changes in climate.” When deciding on whether to install insect netting or which mesh size to use, growers may want to consider targeting pests that have outbreak potential. For example, mesh openings of 0.8 mm x 0.8 mm will not only exclude the pepper weevil from entering the greenhouse, but Tuta absoluta as well, she adds.

Holland Gaas has worked with a number of Canadian growers over the years.Because of this, their managing director, Marcel Schulte, says they continue to tweak their products for improved performance in various climates. “Due to different weather conditions, different guiding systems have to be used,” he says, explaining that the system ensures proper folding of the netting screens as the vent closes. To stand up to high winds, such as those experienced in the Windsor-Essex region, the supplier has developed a new, stronger stainless steel guiding system. The installation process is not one-size-fits-all either. Schulte says they’ve engineered different installation solutions for each type of greenhouse and often customize them for different situations.

Price-wise, purchase and installation costs can vary. “A lot of it has to do with the current greenhouse structure and how much retrofitting needs to be done,” McCreary explains. “If they’re older greenhouses that need a lot of retrofitting, then it’s going to be at the higher end. Some of the new greenhouses that are being installed [are] working it into their original design.”

Though the upfront costs can be steep for larger acres, Ingratta says the benefits multiply in the long-run. His crop now finishes cleaner and cleaner with every season, drastically reducing the inputs and efforts needed to manage their pest challenges each year. It’s allowing them to finish strong, and more importantly, start the next season with little to no pest pressures present. “It’s like having a little force field protecting the farm,” he says, while also reducing the risk of developing resistance. “No pest is going to build up resistance to screens.”

Though pepper weevil pressure has been low in the past two years, insect screening seems to benefit the greenhouse in many different respects, including a more stable indoor climate, fewer chemical inputs and more effective biocontrol. “Biocontrol programs can be much stronger when there aren’t as many pests flying around,” McCreary points out. While insect netting screens generally won’t be 100 per cent perfect, as one or two pepper weevils will find a way to sneak in, the netting still makes a substantial difference. “It all results in potentially fewer pesticides being used …[and] makes for a stronger pest management program.”


Related
New greenhouse curtains save energy, transmit light
Keeping tabs on the European corn borer
Seeing disease in a new light
What is that caterpillar hiding in my pepper?