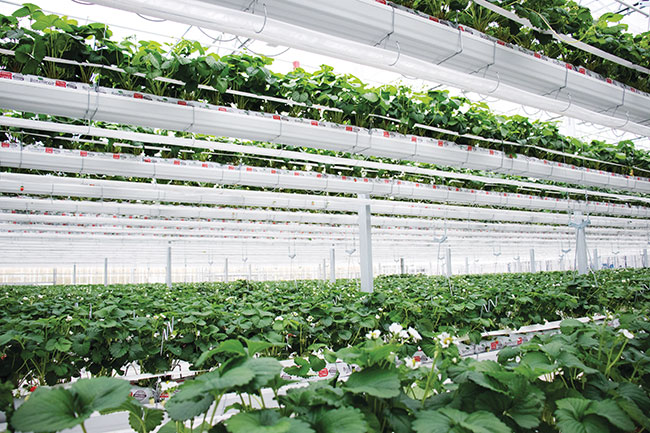 The lift gutter system at Sunterra allows for production at a greater plant density. ALL photoS courtesy of Sunterra Greenhouse

More and more Canadian greenhouse growers are recognizing the unique opportunity that lies with strawberry production. With two years of COVID-19 behind Canadians, the value for fresh, locally grown fruit and vegetables is evident now more than ever, and growing strawberries under glass helps ensure they’re in supply all year long.

Sunterra Greenhouse, located an hour northeast of Calgary in Acme, Alta., is a recently constructed 20-acre greenhouse facility for tomato and strawberry production with plans to expand to 70 acres. According to Amanda Hehr, president of Sunterra Greenhouse, they’re the third greenhouse in North America to implement the lift gutter system for strawberries. “It’s more expensive, but it allows for 10 rows per eight-metre bay rather seven to eight rows at most with conventional systems,” says Hehr. It means better use of the growing space and higher plant density, and their next expansion may almost be exclusively strawberries.

Starting with 2.5 acres of a novel Dutch variety, Sunterra planted their first crop in Nov 2021 and harvested their first batch of strawberries in Jan 2022. “There’s so much demand,” says Hehr, who estimates that Alberta imports 97 per cent of its strawberries. Since imported berries often have less quality and flavour, that leaves more opportunity for local greenhouse strawberry production. 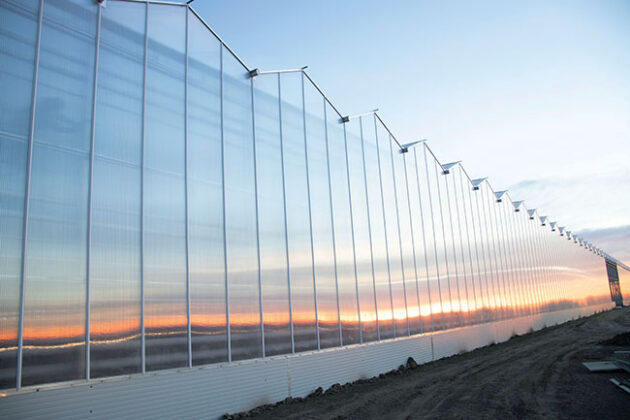 Located in Acme, Alta. is Sunterra’s recently constructed 20-acre greenhouse facility for strawberries and tomatoes, with plans to expand to 70 acres.

Strawberries for the Alberta market

According to Megan Shapka, interim director for the Centre for Applied Research, Innovation & Entrepreneurship at Lethbridge College, the annual demand for strawberries totals 14 million kg in Alberta, and much of the supply is imported from Mexico and California. With their new facilities, Sunterra aims to produce about 200,000 kg of fresh strawberries per year.

“Sunterra Greenhouse has also been exclusively testing a Japanese variety of strawberry known for its high quality, sweetness and texture,” shares Shapka, whose team has been working with Sunterra to optimize production. Once it’s available for commercial production, the Japanese variety could sell for a premium.

While most strawberry propagation occurs by collecting and rooting the runners from mother plants, the two varieties used by Sunterra were developed for cultivation from seed. As Shapka points out, this practice not only reduces the risk of disease transfer from mother plants, it also allows Sunterra to bring the varieties to Canada more easily than other plant material. “Growing strawberries from seed is a new technology and has not been adopted widely within the industry,” she says.

Sunterra’s greenhouse strawberries are currently sold exclusively through Sunterra Market grocery stores, an Alberta grocery chain and an extension of their corporate brand. “Our first focus, of course, will be to market to Albertans and then widen that distribution area as we bring in more acres,” says Hehr.

So far, they’ve been able to grow strawberries that are more flavourful and nutritious than imported ones. It helps that their product only takes 24 hours to reach store shelves, rather than seven to ten days after harvest. Compared to the average imported field-grown strawberry that is bred for distance, Sunterra’s are focused on sweetness, aroma, colour and speed to market. “We allow the fruit to ripen on the plant to obtain high brix levels,” says Hehr. 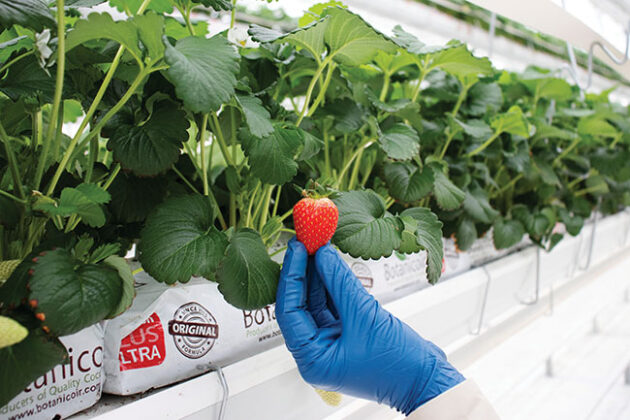 In addition to the benefits to quality brought on by local production, Alberta’s cool, dry climate, large amounts of sunlight and lower natural gas and electricity costs also make it a logical choice for growing the fruit. “We have more sunny days than any other province in Canada,” Hehr says. A total of 333 days in their area, in fact.

“We have such cold winters here that it presents some risk,” she adds. Sunterra currently sustains a full winter crop and year-round production with supplemental LED lighting.

“I think we’re growing very efficiently,” she says. In addition to installing energy-saving LEDs, Sunterra recaptures CO2 from their boilers to feed their plants and recirculates their leachate.

Finding skilled labour in their remote location in Alberta is proving to be an even bigger hurdle. While tomatoes require under two workers per acre, strawberries average four per acre. “In strawberries, we really require skill in terms of crop work and harvest technique, so that’s taken us a while to build those competencies,” Hehr says.

Hoping to hire over 200 employees in the next three years, Hehr says they want to prioritize creating jobs for locals. “Value-add agri-food in this province is really growing and we want to be at the center of that,” she says.

Sunterra Greenhouse’s collaboration with Lethbridge College on research trials for strawberries shows that there’s lots to look forward to in the industry. Whether it’s evaluating plant density, comparing varieties or testing unique strawberries from Japan, research and development is a key priority for the greenhouse. “I think we’re always going to be looking at quality as a priority,” Hehr says. “We’re always searching for unique and high-flavour genetics.” 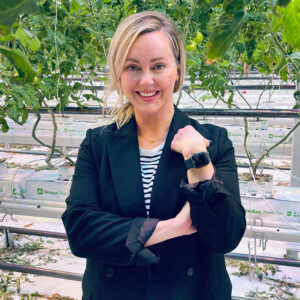 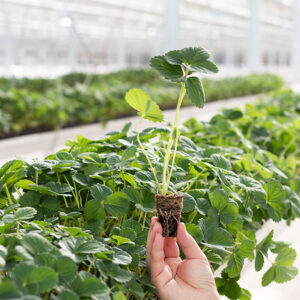 Particularly for the strawberry crop which requires more workers per acre.

Funded by RDAR and the Canadian Agricultural Partnership, the latest collaborative research project between Sunterra and Lethbridge College officially began in Sept 2021 and will conclude in Dec of this year.According to Megan Shapka, the project encompasses both strawberry and tomato trials and spans two locations: pre-commercial research studies at the Brooks Research facility where Sunterra has been conducting strawberry trials since 2019, as well as commercial validation at Sunterra’s in Acme, Alta. Research objectives for strawberries include evaluating varietal performance and growing media, optimizing planting densities and LED lighting, as well as controlling powdery mildew.

In Oct. 2020, the government of Alberta transferred management of the Brooks greenhouse to Lethbridge College.

“The Alberta greenhouse industry is the fourth largest in Canada,” shares Shapka. “The industry has experienced bourgeoning growth in recent years thanks to consistently low natural gas prices. This has led to a highly competitive environment as greenhouse growers in Alberta are forced to look for innovative technologies for lighting, computer-controlled climates, growing media, sensing technology and more efficient water and nutrient management systems.”

At the same time, the industry is under increasing pressure to reduce its environmental impact, leading the college to focus its resources on improving water, nutrient and energy efficiency of greenhouse operations.

With files from Lethbridge College