News
Predator is Tough on Whitefly

Dicyphus hesperus has shown a high potential to control whiteflies and other pests of greenhouse tomato crops. It is native and wildly distributed in North America and has a big appetite for all the pests on a variety of crops. 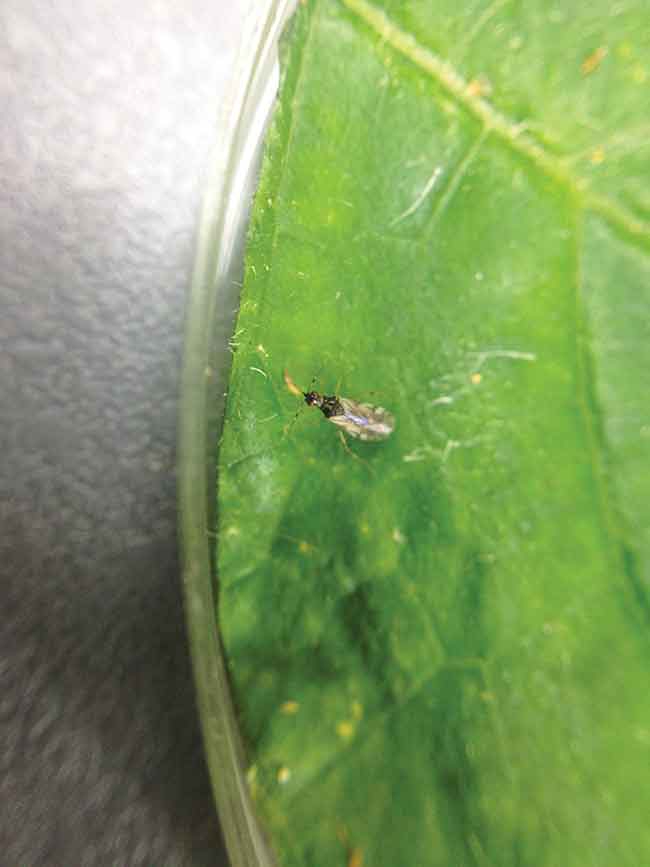 The tomato crop is one of the most important crops under the protected and open environment. The plant is a favourite of many herbivores such as whiteflies, spidermites, thrips, etc.

Quite often, growers have to resort to using pesticides to manage these pests because the tomato plant is not a suitable host for many of the natural enemies; the list of natural enemies that can be used on tomato crops is miniscule.

During warm summer months, Encarsia and Eretmocerus species work well to control whiteflies, but they do not work for winter crops due to lower temperatures and short day lengths. There are few natural enemies available to control pests like whiteflies, spider mites, and thrips on protected tomato crops in particular and specially during winter; therefore, growers try to control these pests by using chemicals.

Over the years, these pests have developed resistance against almost all the chemicals registered to use in Canada. Because of these difficulties encountered with current IPM systems, introduction of mirid bugs like Dicyphus hesperus can be a valuable tool to add to their arsenal for fighting pests during the winter months.

IMPORTANT PREDATORS, ESPECIALLY IN THE WINTER
Mirid bugs are important predators of these pests, especially whiteflies. Nine species of mirid bugs have been recorded in North America, but only Dicyphus hesperus has shown a high potential to control whiteflies and other pests of greenhouse tomato crops. It is native and wildly distributed in North America and has a big appetite for all the pests on a variety of crops including tomatoes.

Canadian scientists have explored many facts about D. hesperus, a strong predator, and established information about its potential to control insect and mite pests on greenhouse crops, including winter crops. It appears to be particularly useful when crops are grown under lights during the winter months.

As a general predator, D. hesperus can prey on all stages of whiteflies, mites, aphids as well as the larvae and adults of thrips. Moreover, it predates on the eggs and larvae of moths and butterflies. Dicyphus hesperus does not undergo obligatory diapause; it only undergoes facultative diapause which is triggered when the light hours are less than 13 or the temperature is below 15 C. The diapause in D. hesperus is also highly modified by temperature. Under normal greenhouse conditions, more than 60 per cent of females continuously reproduce during winter months without the use of artificial light.

Most growers that have tried using D. hesperus are frustrated because of the long time it takes for it to develop from an egg to an adult (around six to eight weeks). This causes a delay in D. hesperus response time, which results in an increased pest population. Similarly, natural enemy producers face challenges including long life cycle, laborious collection process, and high cost of alternative prey food to mass-produce this predator.

RESEARCH HAS LED TO IMPROVED COMMERCIALIZATION
Due to these factors, this predator was previously not easily available on the market for use, but researchers have overcome this problem with their extended knowledge of the biology and ecology of D. hesperus. Over the years, they have developed methods to mass-produce this predator at a very affordable price for commercial growers.

The most controversial aspect of its use is that as an omnivorous insect, D. hesperus requires both plants and prey food to complete its life cycle (except where the mullein plant is used as a host plant on which it can reproduce without animal food).

According to a Canadian scientist (McGregor, 2000), D. Hesperus does not feed on fruits, particularly on tomato and pepper plants, in the presence of leaf material and prey and does not damage fruit unless its number increases up to 100-150 per plant in combination with a shortage of prey. More importantly, all stages of D. hesperus can easily move on all parts of a tomato plant including parts with long extensive hair.

To conclude, the use of generalist natural enemies can help farmers develop successful IPM programs that are needed to reduce the use of chemicals and insect resistance. Moreover, the presence of generalist natural enemies in greenhouses can provide a first line of defence against pest invasion. Understanding the biology and ecology of such predators is pivotal for their mass production and use in biological control programs.

Dr. Abida Nasreen is director of research and development with GrowLiv Ltd. – www.growliv.com.