The closed structure and controlled environment of the greenhouse makes for an ideal place for this technology to flourish, but even here there are challenges. 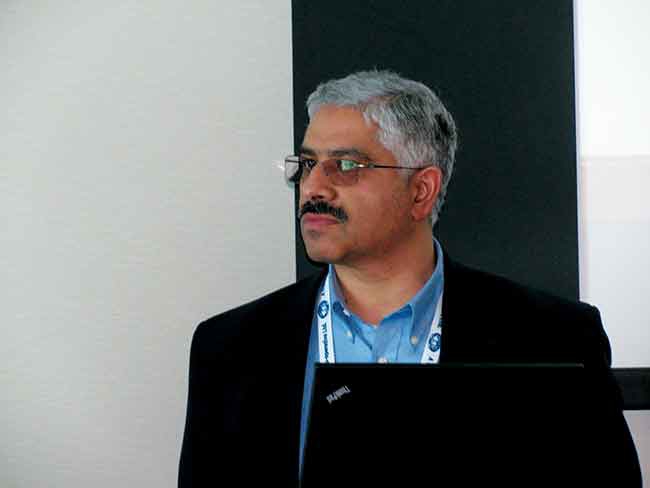 Dr. Medhat Moussa is a professor in the school of engineering at the University of Guelph.

February 2016 — Bill Gates once predicted that every home in South Korea would have a robot by 2015, and that Japan’s robotic industry would reach $50 billion by 2025, says Dr. Medhat Moussa, a professor at the school of engineering, University of Guelph.

“That hasn’t happened. However, every year has seen record sales of robots for the last five years. Every year breaks the record. Some of that is due to the auto sector, but also to technological advances in robotics.

“What does that mean for agriculture? Well, a recent market study predicted that the agricultural robot market would grow from $817 million in 2013 to $16.3 billion in 2020, that’s just seven years.”

This growth is happening and researchers at the University of Guelph are helping it along.

EXAMPLES OF AGRICULTURAL ROBOTS
A lettuce-thinning robot, by Blue River Technology in California, is used for the thinning and weeding of lettuce to increase yield. Its vision system scrutinizes each plant and then applies “advanced artificial intelligence algorithms that make plant-by-plant decisions” to optimize yield and then eliminate unwanted plants according to its programming, said Moussa.

Agrobot S.L., a company from Spain, has developed a strawberry harvester that uses cameras to analyze the plant and find the ripest berries. It takes 20 photos per second and sends this data to a computer algorithm that separates each berry by its shape, size and colour. If 80 per cent of a strawberry meets the criteria, an arm is extended to scoop up the fruit in its basket and a blade extends to cut the stem. This machine should be available quite soon.

Most of these robots are for specific crops, and attached to that is a specific feasibility study of whether or not there is a cost benefit to operating these systems, Moussa explains.

“So what about a general robot for harvesting? For this, there are many challenges,” he says, citing a recent research paper that followed 40 different projects worldwide over the last 30 years. “Not a single one of them was commercialized for general harvesting.

The issue lies in the wide variation that exists among cultivars for each crop. Each crop has its own size variability, reflectance and ripeness signature that the vision system has to accommodate. In addition, the accessibility and visibility of the fruit must be optimal.

There is also the variability in the growing environment whether it is wind and rain, natural lighting conditions or physical objects in the way. For fruit, different cultivation and training systems that impact tree geometry must be accounted for in the programming. Guidance systems that are appropriate for open fields or orchards are also needed. “All of these add to the complexity of using a robot in the open field,” he said.

Dr. Medhat Moussa is a professor in the school of engineering at the University of Guelph.

INCREASED INTEREST IN GREENHOUSE APPLICATIONS
The closed structure and controlled environment of the greenhouse, however, makes for an ideal place for robot technology to flourish, but even here there are many challenges.

“The Leamington area has the largest concentration of greenhouses in North America and these are all high tech. In terms of the level of technology, the only competition is in Holland,” he says.

Besides environment, robots are needed in the greenhouse industry because labour accounts for 30 per cent of expenses or about $70,000-80,000 per acre per season. Moussa and his research team were approached by a large operation in 2009 to develop a robot system for harvesting, de-leafing and later scouting for diseases. While setting up this system, Moussa said they had some issues.

“In terms of technical issues, tomato greenhouses have 10,000 to 12,000 plants per acre, which is difficult for a robot looking for fruit covered by leaves.”

The other problem is dynamic, where the robot is attempting to grasp a tomato but brushes against the plant causing the whole plant to move which changes its location.

Another issue is speed. Researchers have found that workers are generally very efficient and can pick a tomato in six to seven seconds. The robot currently takes just over one minute.

Safety is a concern and not just for workers for whom there are guards and sensors mounted on the robot, but also for the health of the plant. “If you make a mistake and cut the plant, that’s a production issue. There are a lot of tomatoes on one plant,” he said.

The last issue is cost. “How much are you willing to spend? Can we actually use robots to increase revenue by reducing waste and increasing yield?”

Moussa’s team uses a systems approach that includes both hardware and software, with the design being driven by data. He calls the system the Guelph Intelligent Greenhouse Automation System, or GIGAS.

To generate these data, the GIGAS components include a vision system with multiple cameras to take images of the plants.

“At the back end is a plant database that keeps track of all the plants in the greenhouse, with a decision support and planning element, where all the calculations are made. Once a decision is made, that message is sent to the robot that goes and does the job,” he said.

This robot can gently pick an individual beefsteak tomato, or properly select a tomato cluster for supper. The robot also has a different arm adapted for trimming foliage and de-leafing.

During a workshop in 2012, Moussa was asked by some growers if GIGAS could be used for disease scouting. “This is very preliminary, but we can actually scan for powdery mildew and detect it early on,” he said.

CHALLENGES OVER THE NEXT FIVE YEARS
One technical challenge is giving the robot full functional capabilities. For a robot to work well, to pick the crop and deliver the harvest, it has to be connected with the rest of the infrastructure in the greenhouse and this has not been done. This is more of an engineering issue than a research one, he said.

“Our vision system now is about 60 to 70 per cent accurate and we are working to increase that. We are also looking at multiple cameras and other sensors like lasers,” he said.

“As for the gripping system, we are doing very well. This is our last iteration and we have tested many exotic designs with multi-fingered hands. But the more exotic, the more costly it becomes and no one can afford it. So the dual-finger gripper can be picked up from many manufacturers, I can adjust that, add sensors and a controller and then you can have something that is reasonably priced.”

Speed is another challenge. “This is something we know how to do but we haven’t done it yet because that needs specialized hardware,” he said. Technology has improved vastly in the last 10 years for a reasonable price, and more speed will come with every advance.

Of regulations, Moussa says there is a new collaborative safety code for robots to have built-in safety sensors that stop the arm and grippers from harming workers.

On the research side, he says the growers come first and drive the research. “We are constantly asking them what their priorities are. We also look at the commercialization, how much is this going to cost? It has to fit within the cost structure of the growers,” he said.

Moussa predicts that in four to five years they will have developed a commercially viable robot for harvesting and de-leafing.

For more information on his research program visit robotics.uoguelph.ca.

Hugh McElhone is a freelance writer and photographer in Ontario.