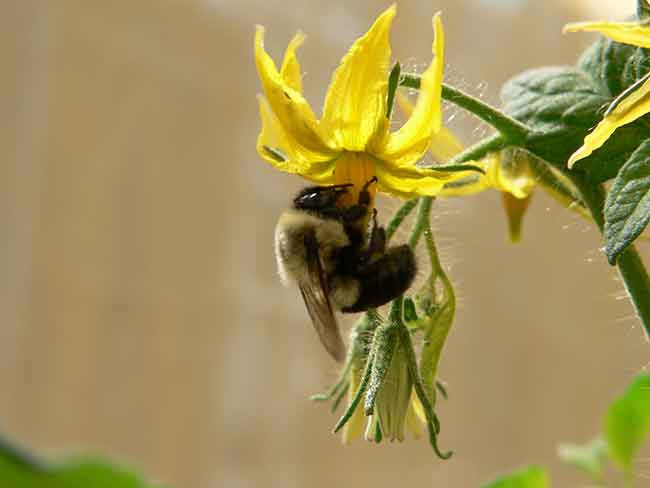 With numerous studies hitting the headlines detailing the potential harmful effects of pesticides on both bee health and their pollination services, questions are becoming front of mind across the industry as to where viable alternative crop protection solutions will come from.

Bees play a critical role in pollinating crops, but what if they could also deliver pesticides? Bee Vectoring Technologies (BVT) of Canada has developed a system that does precisely that.

Commercially bred bumblebees leave their hive via a specially designed tray filled with an organic pesticide powder – called BVT-CR7 – that’s harmless to the insect but inoculates flowering plants against a wide range of diseases including botrytis and sclerotinia.

The pesticide is a strain of a naturally occurring fungus called Clonostachys rosea. As the bees leave the hive they are directed to walk through a tray of powder so they pick up spores on their legs. When they land on flowers to pollinate them, they leave behind a sprinkling of the powder, which protects the plant and fruit against diseases.

Because bees deliver the biocontrol straight to where it’s needed, there’s a lot less wastage compared with spraying an entire crop and surrounding area. The same protection can be delivered with between one and five per cent of BVT’s natural pesticide.

The technology is based on research that was started 20 years ago by Dr. John Sutton, a plant pathologist at the University of Guelph. He worked with fellow scientist Dr. Peter Kevan and agronomist Todd Mason to understand how a particular biofungus could help protect blooming crops before the research was commercialized.

Essentially, the insect-delivered fungus colonizes the flower before a pathogen gets the chance to take over, providing a physical block to the pathogen and extending the shelf life of a strawberry by up to 12 days, for example.

In addition to extending the shelf life of produce, the system can work where chemical pesticides are starting to fail. Those that were working well in the 1980s or 1990s have seen resistance build up over time and their effectiveness diminish.

The BVT team isn’t the only operator in this field, but it is one of the first to commercialize the approach using bumblebees. In the early 1990s, honeybees were used to deliver a fungus called clonostachys to control grey mould in strawberries and raspberries. They were also used to deliver a bacterial pesticide to kill off the sunflower moth, and a virus to control the corn earworm.

The company chose bumblebees over honeybees for a number of reasons. Firstly, they are relatively easy to rear commercially and are used in almost all commercial greenhouses as pollinators. They are also bigger and can carry more of the powder, don’t need any special training to handle, fly in colder temperatures and are less aggressive.

One of the biggest challenges BVT faced was in creating a powder that would cling to the bees’ legs without triggering grooming behaviour. Once the company changed the formulation, the bees no longer groomed the powder off.

In addition to developing its own proprietary pesticide powder, BVT is working to combine its dispensing system with biological controls for different pathogens made by other companies. Tests are underway with products including the fungus Beauveria, which can control certain insect pests such as aphids; a bacterium called Bacillus thuringiensis that controls some moths and worms, and Streptomycin, an antibiotic that controls a contagious disease that affects apples called fire blight.