As Richard Keehn walks the aisles
of his small greenhouse, pointing to a Venus Fly Trap here, a
Sarracenia there, it’s easy to get caught up in his enthusiasm for his
plants and for the new career he’s built himself. 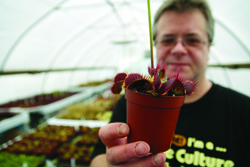 As Richard Keehn walks the aisles of his small greenhouse, pointing to a Venus Fly Trap here, a Sarracenia there, it’s easy to get caught up in his enthusiasm for his plants and for the new career he’s built himself.

Today, he wears a T-shirt that reads “Trust Me! I’m a tissue culture technician” while walking through the Lumby, British Columbia, home of Keehn’s Carnivores (www.keehnscarnivores.com). But it’s been barely four years since Richard ditched his 25-year career at a Salmon Arm lumber mill to join his bride-to-be on her hobby farm to raise plants that, literally, kill.

Keehn, whose childhood interest in carnivorous plants was rekindled by his own children, initially aimed to make a career of tissue culture, a process he found attractive because it seemed “so science fiction.” (Keehn often listens to an audio version of Frank Herbert’s Dune books during late nights in the greenhouse.) After work at the mill, he would return home, make a quick meal, and spend hours learning tissue culture. He culled the basics from a helpful Internet teacher and experimented with the finer details.

DEVELOPING A LIFELONG INTEREST INTO A BUSINESS
Eventually, his goal to become a tissue culture specialist sprouted a business plan, one that included carnivorous plants, a tissue culture lab and a greenhouse.

Bobbi Keehn, Richard’s wife and business partner, took a break from packing product orders when I visited the couple in mid-June at their greenhouse. The pair, with the help of Bobbi’s two kids, had been working well into the early morning hours trying to fill the flood of orders that followed the first dozen newsletters Bobbi had sent various Western Canadian garden centres.

Keehn’s Carnivores, after all, is still a small operation – just a 1,080-square-foot greenhouse, some hardening and packing rooms in a barn, and a well sealed tissue culture lab attached to the house. Inside the greenhouse, two walkways separate rows of planters filled with Venus Fly Traps, glittering sundews and butterworts, among others. At the far end, several inflatable swimming pools hold plants, like the aforementioned Sarracenia, or pitcher plants, that require more space.

When the greenhouse arrived in a box on the back of a freight truck, it was so small Richard and Bobbi thought there’d been a mistake. It wasn’t, of course, and Richard, using skills from his previous career, set up the greenhouse, its piping and, with the help of the Internet, dual light systems – one on a timer, the other monitoring the exterior sun light.

“In the mill, being a planer, you’re expected to know everything, from welding to first aid,” he explains. “When you’re a jack of all trades it makes it a lot easier to do stuff like this.”

SERVING DOMESTIC AND INTERNATIONAL MARKETS
Since then, there have been shipping mishaps and a spider’s web of international regulations to learn, but when Richard tells a story of a challenge, it inevitably ends with a good-natured joke and a genuine chuckle.

After all, much has gone right. Pest issues have been minimal – fungus gnats, the one problem are controlled by the use of nematodes. The only use pesticides on plants destined for international markets that need to meet export criteria. And the couple wisely decided to buy inflatable flaps for the greenhouse to protect against snow.

This year, meanwhile, started with a bang, with revenues in the first five months doubling 2007’s take. Just as rewarding, a handful of Keehn’s specimens appeared in the Royal Ontario Museum’s much-hyped exhibit on Charles Darwin.

Indeed, with Bobbi also working full time at a local grocery store, finding the time to propagate and nurture the plants, to select the best and carefully arrange them in individual plant holders, and to pack and ship them, has been the biggest challenge for the pair.

EXPANSION PLANS BEING RESEARCHED
There are plans for a new 3,000-square-foot greenhouse next year, by which time Bobbi says she will have left her grocery job to focus on carnivorous plants full time, hopefully with hired help. But in June, Keehn’s Carnivores was still a one-and-a-half person operation. While the couple toyed with the idea of Bobbi quitting her job immediately, the spectre of winter, when costs are at their highest and revenues are non-existent has cooled their enthusiasm.

“We’re just on the border (of Bobbi quitting her job). On every other day, it’s ‘I think you should quit,’ but we’re just not at that comfort level yet,” says Richard.

Bobbi’s of the same mind; it’s best to be patient. “Definitely next year for sure, if not this year, the way we’re going….” She pauses, then adds: “…if he let’s me advertise again.”

Tyler Olsen is a freelance writer and photographer in British Columbia.