Dietrich and Elizabeth Kuhlmann started with an 8'x40' lean-to greenhouse. “The award recognizes not just that they have been running a successful business since 1962,” said Dr. Mohyuddin Mirza, greenhouse business specialist with Alberta Agriculture, Food and Rural Development, “but it also recognizes their contribution to the growth of the industry.” 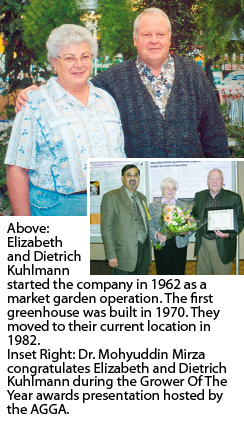 Dietrich and Elizabeth Kuhlmann have been honoured with the 2005 Grower Of The Year award from the Alberta Greenhouse Growers Association (AGGA), in recognition of their own business success and their helpfulness with other growers over the years.

“The award recognizes not just that they have been running a successful business since 1962,” said Dr. Mohyuddin Mirza, greenhouse business specialist with Alberta Agriculture, Food and Rural Development, “but it also recognizes their contribution to the growth of the industry.”

Dietrich was president of the AGGA from 1988 to 1991, and was instrumental in moving the industry forward by encouraging the government to act on earlier task force recommendations designed to foster growth.

His willingness to share information on his business with new growers has been well-received. “His unique insight into markets and marketing is readily available to anyone in the greenhouse industry,” said Dr. Mirza.

Kuhlmann’s Market Garden & Greenhouses Ltd. was started in 1962 on rented land and with only part-time help working with Dietrich and Elizabeth. This was primarily a market garden operation specializing in ‘pick-your-own’ sales. They also attended farmers’ markets and started wholesaling some of their crops, including potatoes, cabbage and cucumbers.

The first greenhouse was built in 1970, a lean-to structure measuring only 8' x 40'. It was attached to an old hog barn.

“Elizabeth always grew a lot of flowers from seed for our own farmyard beautification,” recalls Dietrich. “To get an early start, we built a movable cold frame on our south-facing patio with old windows on the top. We used an old hair dryer to keep the frost out.”

They had intended to use the lean-to for vine-ripe tomato production for the market garden business and their own consumption. “However, Elizabeth soon discovered that she could sell flowering annual bedding plants and make a good dollar at it.” The lean-to was now home to a growing assortment of flowers.

The business grew steadily over the next decade or so. In 1982, the Kuhlmanns formed a family farm partnership with their two daughters, Angela and Anita, and their husbands, Dale and Doug.

The first phase of the current greenhouse and garden centre was constructed in 1982-83 on a 40-acre parcel of land. A series of expansions over the years has resulted in 100,000 square feet of production greenhouses, a 32,500-square-foot garden centre, and two other buildings used for washing, packaging and storing vegetables.

The production greenhouses are freestanding structures with roll-up sides. This ensures ideal conditions for bedding plant production, notes Dietrich, “as it makes for hardy plants that stand up well for our customers.”

They offer about 2,000 varieties of bedding plants, perennials, roses, herbs, trees, shrubs and vegetables. Most of the plants are grown in their greenhouses.

Kuhlmann’s is 95 per cent retail and attracts customers from the greater Edmonton region. It is not uncommon, said Dietrich, to have customers travel from 40 to 50 kilometres away.

Kuhlmann’s Market Garden & Greenhouses is open year-round. However, the greenhouses are closed during the winter months, except for a large retail greenhouse and a Christmas display house. “We learned that in buying plugs and using warm water to irrigate the small bedding plants, we were able to save a good three weeks of production time,” said Dietrich. Considering today’s high heating costs, this translates into sizeable savings.

“We work closely with Dr. Mirza with respect to fertilizer applications and the growing of good bedding plants, our main crop.”

NEWEST BUSINESS
Kuhlmann’s Floral Boutique is now in its fifth year of operation. “Business has really taken off this past year.  We have a very talented staff of four designers and do a lot of weddings and specialty work.”

Dietrich has been a member of AGGA since its inception and has served as a board member and chairman a number of years ago.  “At that time, we were able to persuade the various industry groups to come together once a year to host the Alberta Horticultural Congress,” he said. “Over the years the Congress and trade show have grown tremendously and I am very happy to have had a small part in getting it off the ground and seeing it prosper.”

The Kuhlmanns say the keys to success for a family business are very simple.  Build a solid reputation, build close to your market, develop people skills to deal with your customers, work hard, and get all the family members on side, particularly for major decisions.

It’s also important to meet regularly to discuss issues or problems. “We do this at a family lunch on a daily basis.”
• www.kuhlmanns.com