Assessing the potential impact of free trade with Colombia. 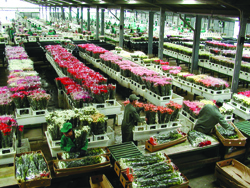 On June 12, 2008 Agriculture and Agri-Food Canada’s trade and market access representatives informed Canadian floriculture producers that the federal government had signed a deal with the Colombians which will result in zero tariffs on cut flower imports to Canada as soon as the legal processes are in place, probably by August of 2009.

This, despite the fact that representatives of the industry had met with the then International Trade Minister David Emerson in January in Ottawa and were assured that the zero tariffs were to be phased in over 10 years in order to allow growers to adjust to the increased volume of imports from Colombia.
The federal negotiators stated that, whereas Canada implemented a defensive action on flowers, the Colombians bottom-lined flowers as being the one product they wanted full access to the Canadian market in return for Canadian access to the Colombian market for wheat, barley, mining and financials. Canada capitulated on flowers for these other interests. In simple terms, the federal government sacrificed floriculture producers in Canada for access to mining, wheat, barley, and financial interests in Colombia. The press release announcing the new agreement issued by Ottawa didn’t even mention flowers.

COLOMBIA ALREADY A MAJOR EXPORTER
The majority of cut flowers imported into Canada come from Colombia ($60 million in 2005), and Ecuador ($28 million), with small amounts by comparison from the U.S., Kenya, Holland, South Africa, Australia, Thailand and Costa Rica.

In 2006, over eight million stems of chrysanthemums from Colombia were sold in Canada, an increase of 100 per cent since 2003, and at the lowest price since 2003. In addition, over 49 million stems of roses from Colombia were sold in Canada. Since 2003, the average price of imported roses has decreased from 41.6 cents per stem to 33.8 cents per stem. In 2005, carnation imports into Canada reached an all time high of nearly 100 million stems. These lower prices are reflected in prices obtained by Canadian growers over this time.

Up to now, these imported flowers have earned the federal government over $6 million each year from tariffs that vary from 6 to 12 per cent, depending on the product. There will now be zero tariffs on imported Colombian flowers. The federal government has given up this revenue for access to other industry’s exports.

GROWERS EXPECT TRADE TO BE FREE AND FAIR
Canadian flower growers accept that they operate in a global marketplace, but they do expect some protection from mass imports and they expect the trade to be free and fair. Carnations are no longer grown in Canada; they were the first to go many years ago. There are now only a handful of rose growers left in Canada. The dramatic increase in imports of chrysanthemums is putting pressure on growers in Canada, and the direct imports of ready made bouquets has placed pressure on other cuts.

ENVIRONMENT AND LABOUR SIDE AGREEMENTS SIGNED
The federal government states that it has signed side agreements on the environment and labour with the Colombians to ensure that production standards are competitive with those elsewhere. The minimum wage rate in International dollars is $8.13 in Ontario, versus $2.93 in Colombia, and Colombian growers have access to new varieties of chrysanthemums from Europe that are exported to Canada, but are prohibited from production in Canada due to quarantine restrictions. Further, a recent comparison between pesticides registered in Canada and those available to growers who belong to a certified standards program elsewhere shows that there are over 100 products that could be used on imported flowers that are not registered in Canada.

There is no doubt that Canadian cut flower growers have just had the odds stacked unfavourably against them by those who should be there to protect them. The only way forward for Canadian flower growers is to be better than their competition.

PROGRAMS ARE NEEDED TO HELP WITH TRANSITION
They need help to retool their greenhouses to grow new crops, and support for research in ornamentals so that new crops can be developed that are uniquely Canadian. They also need support for marketing programs that uniquely identify Canadian-grown products and educate the public about the safety and qualities of Canadian-grown flowers. There also needs to be honesty in product labelling as to country of origin. It is not uncommon for product imported from Colombia to be sold in sleeves marked as “Made in Canada.”

The Canadian floriculture industry has been one of the great success stories in Canadian agriculture, previously independent from government programs. It has a farmgate of $1.44 billion, which is the largest within horticulture in Canada, and one of the largest in all of agriculture. It also enjoyed a positive export trade balance, and employment numbers and taxes generated that are the envy of most in agriculture.

Now, sadly, we are seeing an increased dependence on farm support programs. There is a negative trade balance, lower employment numbers, decreases in taxes generated and a restructuring of the industry with many greenhouse doors closing for good. The industry needs to be rejuvenated by strong investment, encouraging the spirit on entrepreneurship, which drives its free enterprise nature.