Slow-release nutrient amendments, particularly those from plants and animal sources, are becoming increasingly popular in greenhouses and in certified organic farming. Depending on what material is being used, these amendments can vary in the amount, timing and balance of nutrients released. This makes managing soil fertility very challenging if you are a gardener, farmer or greenhouse operator. 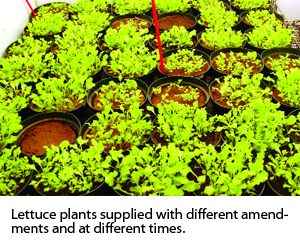 Slow-release nutrient amendments, particularly those from plants and animal sources, are becoming increasingly popular in greenhouses and in certified organic farming. Depending on what material is being used, these amendments can vary in the amount, timing and balance of nutrients released. This makes managing soil fertility very challenging if you are a gardener, farmer or greenhouse operator.

Roughly 95 per cent of the nitrogen in soil is in organic form; it is part of decomposing plant and animal residues. Plants generally cannot use nitrogen in the organic form, rather, it first needs to be ‘digested’ by soil micro-organisms. The micro-organisms later release the nitrogen into the soil in the mineral form, typically nitrate and ammonium, which is available to plants. The total nitrogen content is calculated by adding up organic and mineral nitrogen in the amendment or soil. The amount of available nitrogen can vary depending on the amendments and its stage of decomposition.

• Determine the influence of amendments on crop yield and total nutrient uptake.

• Measure the amount and timing of nutrients supplied by the amendments.

The amendments were applied to an infertile sandy soil to test the effect of the amendment rather than the fertility of the soil. Three rates were used, equivalent to 200, 400 and 800 kg ha-1 of total nitrogen. The worm feedstock used to produce the vermicastings included sheep manure compost mixed with peat moss and cardboard. We grew lettuce and orchard grass in a greenhouse to measure plant yield and nutrient uptake.

In the poultry manure compost and feather meal, the mineral nitrogen was initially in the form of ammonia and ammonium, which can be toxic to seedlings at high levels. Toxicity can be avoided, however, by applying these amendments three to four weeks before planting. We did not see this problem in the vermicastings or alfalfa meal.

The alfalfa meal and feather meal results are considered to be quite accurate, since these materials generally do not change too much. For vermicastings and poultry manure compost, however, the nutrient supplying potential can vary considerably depending on what materials are included in the mix for the compost and for the worm feedstock.

The low supply of nitrogen from the vermicastings is not surprising, considering it consisted of a mature compost, peat moss and cardboard. Nutrients must also be in balance in the amendment, otherwise decomposition may be slowed down and nutrient availability may be temporarily reduced in the soil. A supplement of other nutrients may be required when applying these amendments.

The lettuce responded well to the vermicastings treatment, however, seedlings were either killed or severely suppressed in the poultry manure and feather meal treatments. This is most likely related to toxicity issues resulting from decomposition.

Economic analysis was based on the value of nitrogen in each treatment. The poultry manure compost was the least expensive, followed by feather meal, alfalfa meal and vermicastings. The cost of the vermicastings was very high. With its high peat moss content, however, the vermicastings provided many other benefits and potential uses as a potting medium.

Dr. Andy Hammermeister is a research associate for the Organic Agriculture Centre of Canada.