The Ontario greenhouse industry is a major economic player in the province, according to a recent study. “Ontario needs to recognize its successes,” said one grower. “Greenhouse agriculture is one of the
foremost successes Ontario has achieved in the past 10 years.” 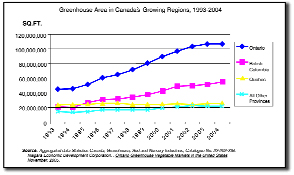 That’s how Margaret Walton, senior partner with Planscape, described the results of her firm’s study, “Greenhouses Grow Ontario.” The economic impact study was presented at the annual industry conference hosted by The Ontario Greenhouse Alliance (TOGA) earlier this year.

Walton teamed up with Dr. Richard DiFrancesco of Regional Analytics Inc. to assess the economic impact of the growing greenhouse sector in Ontario. According to DiFrancesco’s analysis, “Ontario’s greenhouse industry has an economic multiplier of 2.81. That means that for every dollar of greenhouse activity, the economy as a whole experiences output impacts of $2.81.”

With the 2004 farmgate value of the Ontario greenhouse industry estimated at $1.1 billion, the total economic impact is $3.9 billion. This estimate includes direct, indirect and induced industrial output impacts, along with labour income earned by employees.

The industry is a strong contributor to the province’s exports, according to Planscape. Annual exports, based on the most recent trade data, exceed $1.2 billion. Greenhouse vegetable exports account for a slightly larger share of total export trade, primarily with the U.S., than the floral side.

“Greenhouse agriculture in Ontario has been a quiet engine for growth,” notes TOGA chairperson Cole Cacciavillani. “Not many people in Ontario realize how significant our industry is. We are expecting this study will help inform the public about the key role we play in Ontario’s economy,” he added.

“Ontario needs to recognize its successes. Greenhouse agriculture is one of the foremost successes Ontario has achieved in the past 10 years,” said Jan Vanderhout, a member of TOGA’s executive committee and a greenhouse vegetable producer.

“We can’t be complacent about the future, based on the growth of the past. The industry needs to be at the forefront of research in order to increase productivity and find effective solutions to the challenges posed by rising energy costs and a rising Canadian dollar,” said TOGA executive committee member Rej Picard, of Westbrook Greenhouse Systems.

The Ontario Rural Economic Development Program of the Ontario Ministry of Agriculture, Food and Rural Affairs and the Canada-Ontario Research and Development Program funded jointly by Agriculture and Agri-Food Canada and the Province of Ontario under the Agricultural Policy Framework matched the industry’s own funds in financing the extensive analysis undertaken by Planscape and Regional Analytics.

Minister touts industry’s growth and leadership
The TOGA study will be closely reviewed by the provincial government ministries, among others.

Leona Dombrowsky, Minister of Agriculture, Food and Rural Affairs, noted the comments made earlier in the year by Premier Dalton McGuinty at his second annual agri-food summit. “We have to look beyond today to ensure that the sector and the people in it are positioned for long-term success,” said the Premier.

And that’s why, said the Minister, “we have been working with farm leaders from all sectors of the industry, gathering the input and understanding that will help us, as a government, to develop the policies and programs that will allow you, as an industry, to achieve that success.”

Taken as a whole, she said, “the agriculture and food industry generates more than $30 billion annually, employs more than 650,000 people, provides fresh, high-quality and safe food, and shows tremendous leadership in the development and adoption of innovative approaches to doing business.”

The greenhouse sector has annual farmgate sales of more than $1 billion, making it the second largest agricultural sector in Ontario. Some 1,400 operators employ 19,000 people directly and generate another 16,000 spin-off jobs, said Dombrowsky. “Ontario’s 19 million square metres of greenhouses represent an investment of more than $2 billion. In fact, The Ontario Greenhouse Alliance represents one of the largest clusters of greenhouse production in North America.”

The industry’s reputation for innovation is well-known, she added. “Greenhouse producers are unmatched in their willingness to modernize,” she said. “Your industry is known not only for its rapid adoption of new technologies, but in many cases, also developing those technologies.”

She praised Ontario growers for showing leadership in a number of areas, including:

• Adoption of IPM practices by more than 80 per cent of flower growers.

• Market adaptability shown by a continual introduction of new crops, including mini-cucumbers, eggplant, gerbera, alstromeria, snapdragons and sunflowers, among others.

“This industry has experienced phenomenal growth,” said Dombrowsky. Forecasts indicate that the trend will continue, although at a slightly slower pace.


Related
GRASSROOTS EXPERTISE ON GARDENING TRENDS
The ‘greening’ of the marketplace
Healthy markets for fresh berries
From the Editor: April 2011