January 5, 2009  By University of Washington via Newswise posting

Jan. 5, 2009, University of Washington – Calcium builds strong bones, good teeth – and healthy plants, according to a new study from Washington State University.
Experiments show that calcium, when bound to a protein called calmodulin, prompts plants to make salicylic acid (SA) when threatened by infection or other danger. (SA is a close chemical relative of Aspirin.) In plants, SA acts as a signal molecule that kicks off a series of reactions that help defend against external threats.
That plants make salicylic acid has been known for more than 100 years, said B.W. Poovaiah, Regents Professor and director of the study, but the role of calcium in signalling a plant to make SA has not been known before. 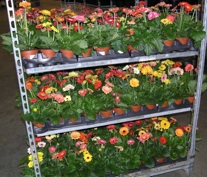 “We are now beginning to understand the molecular mechanism connecting the calcium/calmodulin signaling to plant immunity,” said Poovaiah.
The study will appear in an upcoming issue of the journal Nature and is now available online at http://dx.doi.org/10.1038/nature07612.
Poovaiah said that in controlling salicylic acid level, calcium acts like a gatekeeper within the cells of a plant, directing incoming information and helping the plant respond to such dangers as pathogen attacks. Normal, healthy plants have a low level of SA in their cells. That level rises when the plant is threatened by infection or environmental stress.
“When we expect danger, we try to take precautions,” said Poovaiah. “Plants cannot run away. Plants have to turn on their built-in system to protect themselves. The plant has to produce different signal molecules. One of them is salicylic acid.”

PROTECTION AGAINST THE IMMEDIATE THREAT
According to lead author, assistant research professor Liqun Du, SA sets off defensive measures within the plant, such as the “hypersensitive reaction” in which cells around an infection site die, forming a barrier that keeps the pathogen from invading deeper into the plant. That provides protection against the immediate threat. SA also activates the plant’s systemic acquired resistance, a form of immunity that protects the plant from further pathogen attacks.
But a rise in SA levels also causes the plant to slow its growth, perhaps saving its strength for the battle against the pathogen. That sets up a challenging situation for both the plant – grow faster or protect myself better? – and farmers, who might view SA as a tool to protect their plants from disease. A plant that makes high levels of SA all the time will be safe from infection but will grow slowly. A plant that makes little or no SA will grow like gangbusters but be very susceptible to infection.
“It’s a fine balance,” said Du. “Too much is bad; too little is bad.”
Working with the small mustard plant Arabidopsis thaliana, Poovaiah’s research team showed that the key step in this balancing act is the interaction between calcium/calmodulin and a protein called AtSR1, which suppresses the production of salicylic acid. Stress or infection causes a spike in calcium within the plant cells, which, in combination with calmodulin, acts as a specific signal controlling the activity of AtSR1 and the formation of SA.

INFECTION PROMPTS MORE SA PRODUCTION
In an environment with few pathogens, a plant will have low levels of SA. The plant lets its guard down and devotes more resources to growth. If it becomes infected, SA production goes up, and the plant dials back its growth and puts more resources into defense.
The importance of AtSR1 was especially clear in experiments in which plants were engineered to have more or less AtSR1 than normal. Plants that have extra AtSR1 make almost no SA. They grow larger and faster than a normal plant, but easily succumb to infection. Plants that lack the gene for AtSR1 develop high levels of SA and deploy their immune responses all the time. They are nearly impervious to infection, but small in size. The same is true of plants whose AtSR1 has been changed so it cannot bind to calcium/calmodulin, demonstrating the crucial role played in this system by calcium and calmodulin.