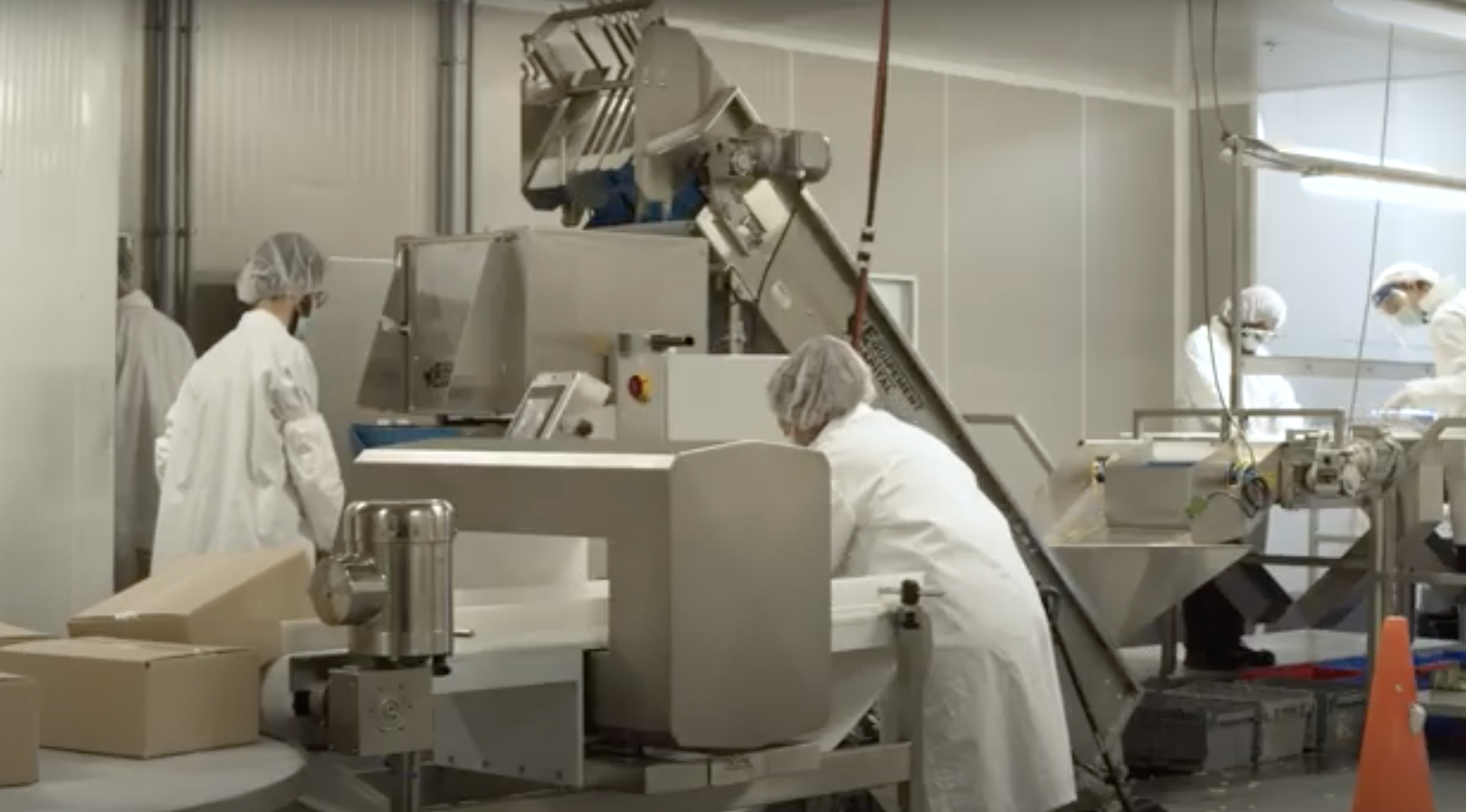 The largest food bank in Canada, Moisson Montréal has added a new fruit and vegetable bagging line to their operation to help sort and redistribute produce to Canadians in need.

Funded by a $150,000 donation from Farm Credit Canada (FCC), the new semi-automated line not only increases their capacity, but helps to ensure the health and safety of volunteers and employees. Previously, bins and cases full of produce weighing upwards of 500 kg would be bagged by hand.

“We are pleased to announce the official launch of a new fruit and vegetable bagging line with a capacity of 1,000 kg per hour. This semi-automated line, funded by the FCC donation, now allows Moisson Montréal to accept, in quantities unprecedented in the sector, surplus fruits and vegetables from producers in order to redistribute them to organizations that feed people and families in need,” said Richard D. Daneau, executive director of Moisson Montréal.

“The line… will allow us to receive huge quantities of produce that is coming from Quebec or Ontario,” says Daneau in the accompanying video.

As he explains, the food is repackaged into smaller bags weighing two to three kilograms each, then redistributed to neighbourhood agencies. Between April 2020 and March 2021, Moisson Montréal says they distributed more than $117,000,000 in food to Montreal organizations and to other Moissons and food banks in Canada. This was 44 per cent more than what was distributed during the same period in the previous year.

Agricultural producers are often faced with a difficult decision when they have a large surplus of fresh food. Although there is a strong desire to donate these surpluses, there is a lack of organizations that can accept them. Previously, Moisson Montreal says they were not adequately equipped to quickly collect and redistribute industrial quantities of fresh fruits and vegetables in bulk.

“FCC is pleased to partner with Moisson Montréal, the largest food bank in the Canadian system, to meet this challenge,” said Louis Turcotte, FCC senior director, corporate and commercial financing. “We hope the organization can act as a hub for all of Eastern Canada. To donate large quantities of fresh (or frozen) fruit or vegetables, agri-food businesses can contact Moisson Montréal, which now has the equipment needed to accept these large-scale donations.”

Bonduelle, processed vegetable producer and longtime partner of food banks such as Moisson Montréal, answered the call by not only donating food to feed the bagging line, but also by offering technical advice that helped the project come to fruition.

“Bonduelle is pleased with the collaboration between FCC and Moisson Montréal on the launch of this revolutionary project,” said Jean-Pierre Haché, vice-president quality, health and safety and IT at Bonduelle. “Bonduelle will use this endeavour as an opportunity to replicate this model elsewhere in North America in order to give more back to the communities in which the company operates. We hope that this project will resonate with other manufacturers who wish to give back and are facing similar constraints. It is proof that everything is possible with the right people around the table to make it happen. We are grateful to all Bonduelle employees, current and former, as well as Moisson Montréal and FCC who collaborated to make this project a reality.”

“Moisson Montréal is deeply grateful to FCC, Bonduelle and to all the players who joined in so enthusiastically to enable us to offer more fruits and vegetables to our community network. This initiative satisfies a critical need and helps promote healthy eating habits,” said Daneau.

Operating on a model based on food recovery rather than food purchases, Moisson Montréal provides 20 million kilos of food per year to the vast food aid network, including nearly 300 community agencies on the Island of Montreal. These agencies, in turn, fulfill some 600 000 food aid requests per month.