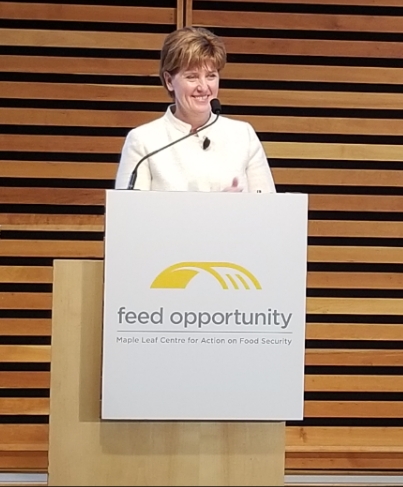 With an estimated one in eight Canadian households experiencing food insecurity, the federal government has rolled out its first national food policy to address access, security and waste.

Minister of Agriculture and Agri-Food Canada, Marie-Claude Bibeau, highlighted A Food Policy for Canada at the second annual Food Security Symposium last week, organized by the Maple Leaf Centre for Action on Food Security. Announced in Budget 2019, the federal government will invest $134.4 million over five years to address food-related challenges and opportunities, drawing from the input of over 45,000 Canadians.

The policy focuses on four key areas, with key initiatives in each.
1. Increasing community access to healthy food
• $50 million to support infrastructure for local food projects, including at food banks, farmers’ markets and other community projects
• $25 million in advertising and marketing to promote Canadian agricultural products
• $24.4 million to detect and enforce action against food fraud

2. Promoting nationally produced food in Canada and abroad
• An additional $100 million will come from the Strategic Innovation Fund to support food processors
• Launch of a three-year immigration pilot to bring in full-time, non-seasonal agricultural workers and will include a pathway to permanent residency

“A Food Policy for Canada is a good first start to support community food security initiatives and to begin to address some of our food system’s most pressing issues, like the cost of food in Northern and Indigenous communities and inadequate access to school food programs,” says Nick Saul, president and CEO of Community Food Centres Canada. “We’re also very much looking forward to seeing further action to support the four million Canadians who can’t afford to buy food for themselves and their families.”

“We need a new long-term vision for healthy and sustainable food in Canada, where no one is food insecure,” says Diana Bronson, executive director of Food Secure Canada. “This will require a new governance mechanism where civil society can bring its expertise to the table”

A Food Policy for Canada initiatives are expected to be released in the next few months.