A close look at how artificial intelligence systems are already making inroads to help growers better manage their energy use, improve yields and more. 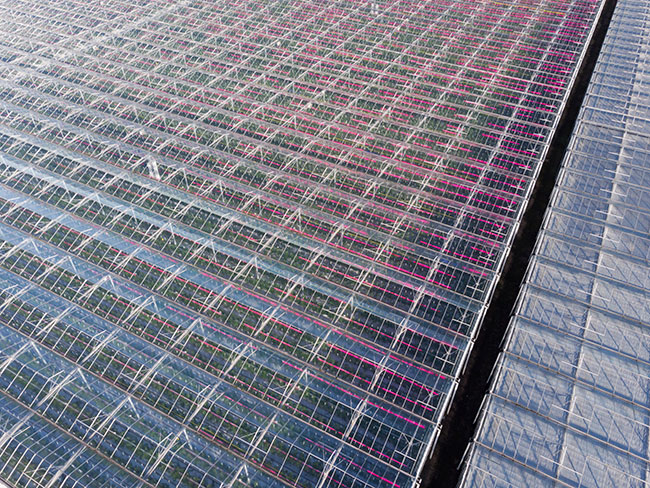 Greenhouse environments are already among the most automated and controlled on the planet, but similar to what’s occurring in many sectors, artificial intelligence (AI) systems are now taking control to unprecedented levels.

Because of their ability to process enormous amounts of data and make tiny, continuous adjustments, AI systems are beginning to provide greenhouse operators with a myriad of production-related benefits – and paying for themselves in a very reasonable period of time.

“AI is now providing greenhouse operators with a much greater ability to fine-tune environmental control,” explains Dr. Fadi Al-Daoud, greenhouse vegetable specialist at the Ontario Ministry of Agriculture, Food & Rural Affairs. “To do its job well, to control not only the macro-environment but also the micro-environment within the canopy, an AI needs large amounts of sensor data not just for temperature and humidity, but light spectrum, water quality, light intensity and more. Using this data, the system then can adjust vents, curtains, light spectrum or intensity or angle, and so on accordingly, to produce the best crop results. Financially, it’s the better crop results and also the small incremental differences in energy use, day in and day out, that give you the savings over the long term.”

Al-Daoud adds that AI can also be harnessed in terms of modelling to forecast the needs of a crop. “A grower can obviously do this as well, but the program will eventually have large amounts of past data available that’s specific to the operation, and can ‘play the long game’ for the whole growing season,” he explains. “The use of AI also allows labour to be more directed and therefore much more efficient.”

How can current AI systems – or systems that approach AI – provide these and other benefits? Here’s a look at current systems being tested or installed in Canadian greenhouses.

The cloud-based Crop Controller system by Blue Radix takes into account the grower’s own unique crop strategy, along with all available greenhouse environmental data. It changes conditions where needed every 15 minutes to maintain an optimal climate for the crop, crop stage, ambient light and so on. The company does not sell sensors but offers Crop Controller on a monthly subscription basis. The greenhouse’s existing measure boxes and sensors are used, but “if a grower chooses to invest in additional sensors,” says CEO Ronald Hoek, “we advise what is valuable in combination with our smart-steering algorithms.” 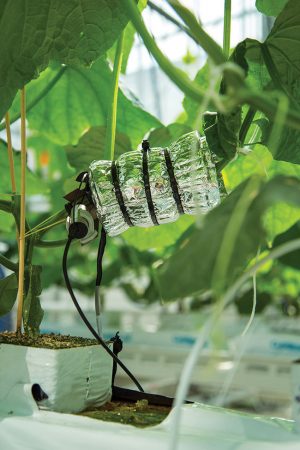 This sap flow sensor from 2Grow is an example of existing inputs for AI systems.

ROI depends on several individual elements, he notes, including yield optimization and current yield levels. “We see huge differentiations between greenhouses of the same size and with the same varieties,” Hoek explains. The system makes adjustments to the environment to help improve the crop and to realize ROI gains, he says. It can also correct missteps that may have occurred without it, and significantly increases the area that can be managed by one grower.

Blue Radix is currently working with 16 greenhouse companies – one in the U.S. and the rest in Europe. In Canada, it has announced a project funded by phase two of the Greenhouse Competitiveness and Innovation Initiative (GCII), collaborating with Ontario Greenhouse Vegetable Growers (OGVG). Starting with three producers, the project seeks to identify the value of autonomous climate management in Canada, as well as help Crop Controller address specific needs of Canadian climates.

Koidra also offers its AI system in a subscription model, with greenhouse owners generally needing to purchase some extra sensors, explains CEO and Founder, Kenneth Tran. In Ontario, Koidra is piloting its technology at Great Lakes Greenhouses in Leamington, a project also supported by the GCII and in collaboration with Harrow Research & Development Centre.

In early April, the trial at Great Lakes started with organic eggplant. “We have four acres of this crop in total and we have half of one of those acres as a control, and the other half of that acre with Koidra,” explains Great Lakes Greenhouses’ Research & Business Development Manager, Mark Reimer. “Both halves have the same sensors and equipment as the other acres or organic eggplant, but there are a few extra sensors and cameras added in the Koidra trial area to enable remote viewing.” 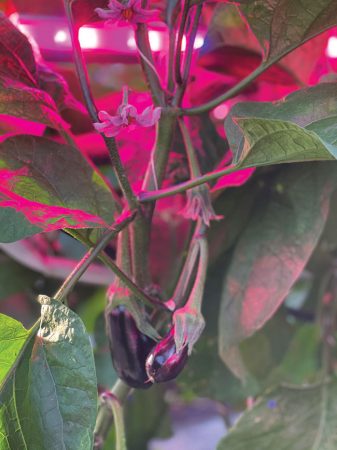 This first trial is focused on seeing how the system functions, notes Reimer, and they expect that yields in the Koidra-managed area will be better than the control area. “We are also looking at inputs,” says Reimer. “We expect that most of the yield boost will come down to micro-managing the lights, dimming them with more accuracy on sunny days and making changes to light spectrum. We plan to roll Koidra out to other areas of the greenhouse this fall.”

Tran says they are piloting with greenhouses in Ontario and B.C., as well as many in the U.S., including a partnership with AppHarvest in Kentucky.

IVO, made by Hoogendoorn Growth Management, is described as “combining powerful algorithms, data from the growing environment and plant physiology,” with insights that “can be used to power AI and machine learning to grow ever smarter over time.” There are over 200 IIVO installations worldwide with about 50 sold so far in North America. 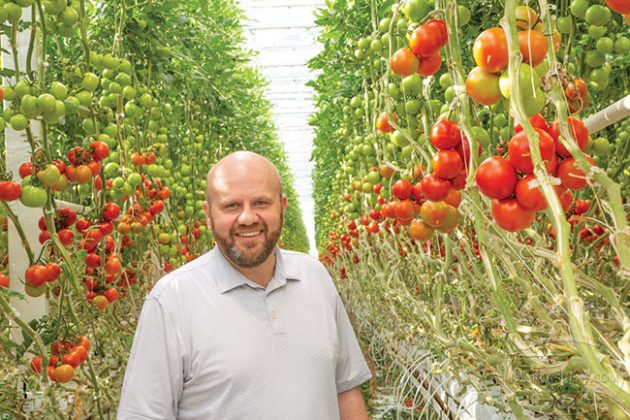 Great Northern Hydroponics recently implemented IIVO at its 70-acre tomato facility in Kingsville, Ont. Of the system’s capabilities, Great Northern’s President, Guido van het Hof says, “many ratios are being monitored and controlled such as light, temperature, humidity, screen positions, pipe or heating temperatures and ventilation settings. There are additional sensors deployed in order to increase the resolution of data monitoring with GearSense cameras, Trutina biomass scale, plant temperature, moisture measurements, etc. All hardware that we already had installed has been integrated.”

The IIVO system autocorrects, explains van het Hof, meaning that his greenhouse no longer depends on the grower to first make the correct observations, then to react by manually changing the climate settings. “This relieves some of the grower’s ad-hoc response responsibilities and the grower can therefore oversee larger areas with less staff.”

In terms of the amount of time needed to fully utilize the system’s capabilities and see the benefits, van het Hof says IIVO’s ‘Data Driven Growing’ is “a completely new concept of climate control and requires a new way of thinking.” Extensive training is therefore required.

“This is why our growing team has returned to ‘plant physiology university’ with Hoogendoorn and LetsGrow, to understand all interactions between parameters,” says van het Hof. “It is a three-year process and not a one-time switchover. The first focus is to learn, monitor and understand this new method. The second stage is learning by doing, and the last or third stage is total implementation and to run the greenhouse according to these new principles.” He expects ROI to be reached in three years. 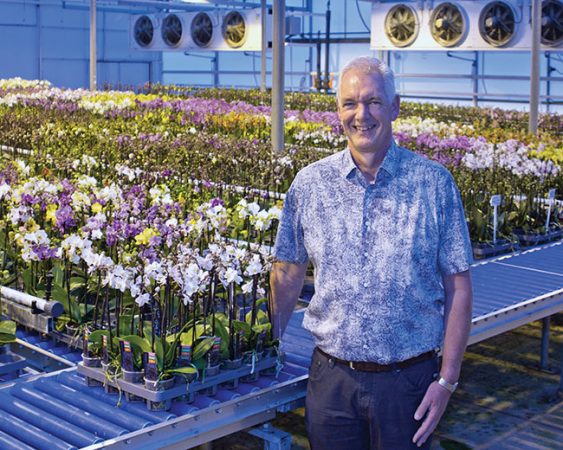 In May, 2020, Neil and Mike van Steekelenburg, brothers and co-owners of Beamsville-based orchid producer CosMic Plants, had IIVO installed at one location which produces 18,000 orchids weekly. They liked the system so much that they installed it at their other location two months later, which is forecasted to produce 16,000 plants weekly.

“It’s very easy to use and you can include an unlimited number of settings and influences based on the measurements coming from the many installed sensors,” says Neil. “You spend a lot of time at the beginning deciding what you need and getting the settings right, and then once it’s set up, it’s so simple. In addition to ease of use, I believe it’s going to allow us to cut our growing phase from potting to flower-initiating. I have worked with Hoogendoorn for eight years and I have faith in their R&D. For example, our cycle between plug stage and flower initiation is 30 weeks, and with IIVO, we will get to 28 weeks through the way it avoids times of growth stagnation for the plants. It makes sure you have the right rhythms all year long.”

“AI will become the new standard in many Canadian greenhouse operations and will allow people to grow their greenhouse footprint without the need to expand their management team,” he says. “In other words, greenhouses will be able to run a larger cultivation area under the direction of the same number of growers/managers.”

Hoek also lists labour as a main factor that will affect the rate of AI adoption in the greenhouse sector. “Many companies are concerned about the availability of experienced growers. This is an enormous challenge for the industry on a global scale and also in Canada. This urgency drives greenhouse owners to work with new innovative technologies,” he says. But first, they must show results and prove that there is value to Canadian growers.

Tran believes AI systems will be very common in greenhouses around the world within the next five years. The lack of skilled growers is making it harder and harder for greenhouse operations to achieve the yields necessary for profitability, he says, which is where AI comes in. “Even small increases in yield have a very large impact on the bottom line.”

But the technology cannot replace the grower.

“I believe in AI and it’s a huge help for growers, but I think it means also that growers become more important,” says van Steekelenburg. “The greenhouse operation becomes more sophisticated, but also equipment will still every now and then malfunction, so it’s very important to have skilled people to monitor and respond as needed.”

Treena Hein is a freelance writer based out of Ontario.