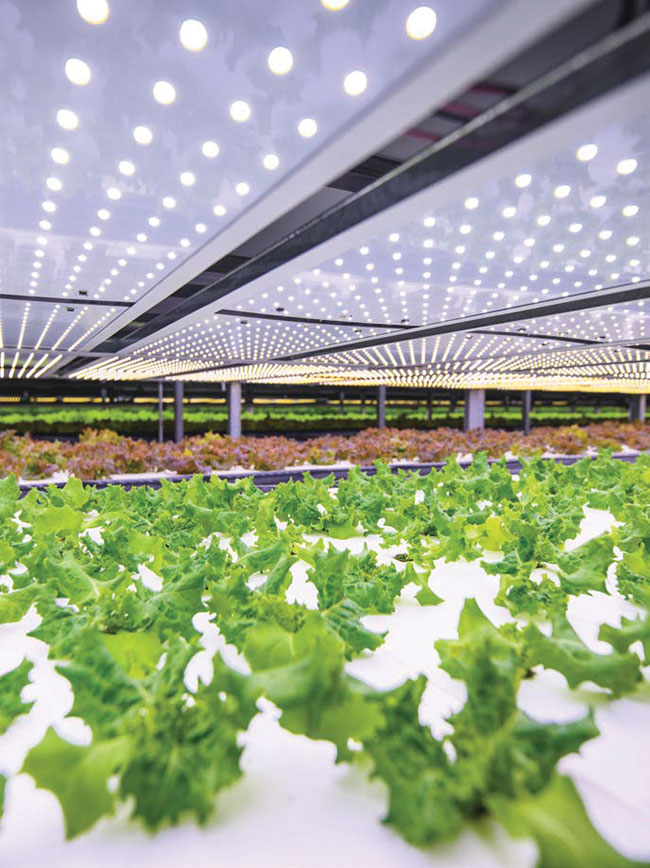 Vertical farming is a high-tech opportunity that could help expand local capacity for fresh produce, but the capital costs could be a sizeable hurdle.

There is an opportunity to take Ontario’s food production in an entirely new direction – literally. Vertical farming, at its simplest, is crop production on vertical platforms in an enclosed space. There are numerous variations of vertical farms, whether they are in a building designed or retrofitted for vertical production or modules built into a shipping container.

Globally, investments in vertical farms have reached over $3.1 billion, with 32% of these investments in North America. Currently, there are a number of vertical operations across Canada, many of which are established in more urban areas.

The output from vertical farms in Ontario can flow into numerous distribution channels. Larger operations can supply product to major retailers while others can supply food service operations at restaurants and institutions like universities. In 2019, an estimated $382 million was invested in vertical farm operations across Canada, and growth in overall investments is expected to exceed 20%. With annual sales estimates in the range of $50 to $100 million, it’s an attractive investment, but a five to 10-year period is required for the value of sales to equal the level of capital invested.

Challenges of Expansion
There are several potential challenges that must be overcome to expand vertical farming in Ontario, such as a higher product price point and higher capital costs compared to traditionally produced vegetables. A 50g bag of microgreens retails for $3.99, or $36.23/lb. When on sale, the price can be reduced to $2.50 – which is about the capital cost of the product at a vertical farm. Vertically grown microgreens are not currently experiencing much sales growth, which could be due to pricing or a lack of public awareness about vertical farms.

Another challenge is the initial capital costs. While these costs can be higher than that of a traditional greenhouse, a vertical farm can produce an amount equivalent to one acre of greenhouse space (43,560 square feet) using just 2,000 square feet of floor space because of the capacity gained by growing vertically and the shorter production cycle for the types of crops grown, providing increased revenue in the long-term. For example, an operation with 15 shipping containers, each housing growing units, could cost upwards of $2.2 million in capital but could ship 175,000 lbs. of leafy green vegetables in a year. Using the $36.23/lb price point as an example, a 15-container operation has the potential to create over $6 million in revenue. However, it’s also been estimated that annual depreciation charges (per unit of output) for a vertical farm are more than double those of a greenhouse when growing leafy greens.

The report points to a quote from the co-founder of FarmedHere vertical farm, who says: “Vertical farming is a rather unique blend between highly efficient manufacturing and technological farming. Its success depends on the following: strong and smart capital, innovative sales and marketing, and a solid management team, working creatively with stakeholders from the local government, growers, technology providers, and customers.” As the report author explains, by focusing on these factors, we could enable expansion of vertical farming in Canada.

There are several suggestions for how vertical farming operations can be expanded in Ontario. Some of the recommendations include starting new operations with a specific market segment in mind—such as health food stores or high-end restaurants—and scaling up to meet those needs. Others include better educating the public on the benefits of vertically farmed produce and developing programs that encourage consumers to try vertically grown products.

Benjamin Hughes is the public relations assistant and Michael Young is the communications advisor for the Greenbelt Foundation.


Related
A sweet opportunity for sweet potatoes
A haven for northern growth
Greenhouse and field strawberry production could supply 50 per cent of Ontario’s needs
2020: The year of the garden