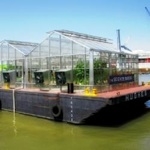 The Science Barge has demonstrated sustainable horticulture practices to 3,000 students.

The nutrient film technique (NFT) system will be integrated into the organization’s Science Barge – a fully functioning example of renewable energy supporting sustainable food production in New York state. Power is generated by solar panels, wind turbines and bio fuels, and the greenhouse is irrigated solely by collected rainwater and purified river water.

“The Science Barge is a prototype initiative featuring a sustainable urban farm that floats in the Hudson River and produces sustainable, carbon-neutral fruits and vegetables,” said Michael Christian, founder, president and CEO of AmHydro. “It’s a progressive model that other urban areas will be able to duplicate and we’re proud that AmHydro was selected to be part of this vision.”

The AmHydro systems used on the Science Barge include the 612HL NFT system for herbs and lettuce and the 210VC for tomatoes, cukes, peppers and other crops. Both are durable re-circulating systems designed for many years of service.

Groundwork Hudson Valley obtained the Science Barge in October 2008. Since then, it has been credited for conducting valuable research to improve the lives of urban populations north of New York City.

To date, the Science Barge has produced more than 1,000 pounds of produce for local shelters.