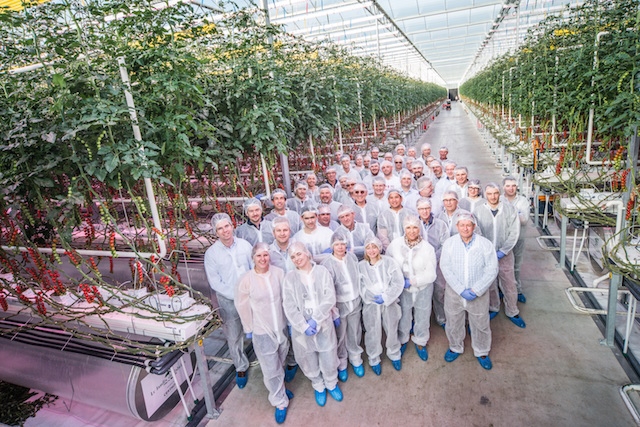 • Kernoas greenhouse, with two seasons of experience growing with 100 per cent LEDs.

“This year we are traveling to France, known for its refined cuisine. Over 90 per cent of tomatoes produced in France are sold locally and there has been a strong move towards winter production to satisfy consumer demand,” says Udo van Slooten, manager of Philips Horticulture LED lighting.

“This event presents a unique opportunity for the tomato community to gain new insights into how 100 per cent LED installations can improve high wire tomato production from three leading innovators in one of Europe’s biggest markets.”

FIRST FRENCH GROWER TO USE ONLY LEDS

As the first large-scale French tomato grower to move to 100 per cent LEDs, Guillaume Kerjean, co-owner of the Kernoas greenhouse, shared results from two seasons of growing the Plaisance cultivar on 1.7 ha with 105 μmol LED toplighting and a double row of 110 μmol LED interlighting.

“Our goal was to expand production of consistent, high quality tomatoes all year round. We have realized all that and more,” said Kerjean. “Our tomatoes are tastier, we have increased our lighting hours and have saved 40 per cent in energy costs.”

The Tomate Jouno greenhouse, run by Christian Jouno, switched to growing year-round cherry and cocktail tomatoes exclusively in 2002 with HPS lights. To do this, it places young plants in between its generative crop twice a year, but the light required by the young plants is usually intercepted by the leaves of the generative plants.

Jouno moved to LED interlighting and toplighting because it offered an energy efficient and sustainable way to increase winter production, without compromising on taste. Placing LEDs between the young plants helped the plants get off to a good start. The result is a shorter inter-node distance (from leaf to leaf), which results in a stronger plant.

“Our challenge is to grow more tomatoes in the winter,” said Delahaye. “So we’re excited by the use of Philips Lighting’s horticultural LED lighting, which is fundamental for our plans to increase the crop yield of fine vine tomatoes and cherry tomatoes by 10 per cent within a year while upholding the taste and overall quality.

“We also see that the developments of new trusses is not affected by using LED top-lighting only. All in all this will put us one step ahead of the competition.”

Philips Lighting, a Royal Philips company, is a global leader in lighting products, systems and services.